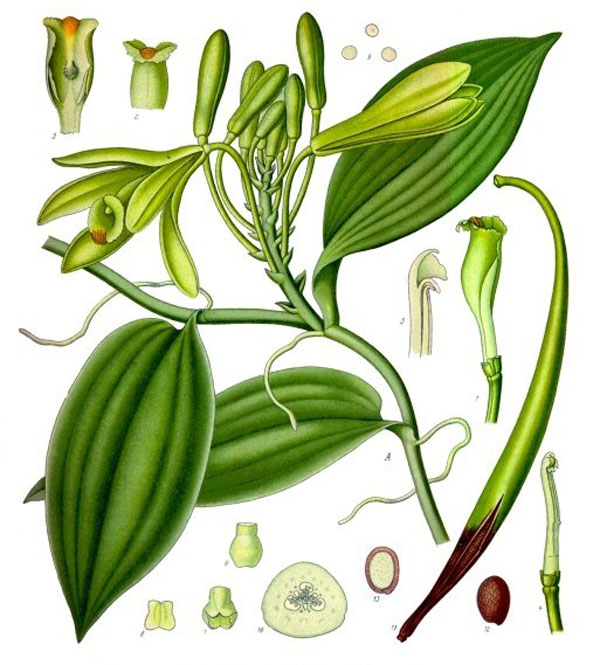 Vanilla is a really strange an interesting substance. We think of it as a flavoring agent for cakes and cookies, which it is, but there is a lot more to it than than. The whole vanilla story is odd. Its made from the seed pod of a vining orchid native to Mexico and central America. The seed pod, when picked, has no scent to speak of, but, when fermented, the characteristic vanilla scent develops. The Native cultures from that part of the world figured out how to bring out the flavor long before the Spanards hit American soil. However, by the native people who knew it best, it factored into medicine, magic, and food. The big three from Central America were chocolate, cayenne pepper, and Vanilla. I have not researched vanilla enough, but, the substance is so complex, I hope at some point to have the opportunity to look into it in further detail.

I will add this. The Orchid family contributes some prettty interesting medicines, including lady slipper, bletilla hyacinthus, and salap. The plants are notoriously hard to grow and there has never been much of these substances on the market, but, orchids do produce some really interesting medicines and food and all of a building tonic nature. More work is required on this group of really odd plants.

What follows is quotes from my favorite doctors, the Eclectics, on the subject of vanilla.


1911: LLOYD
The conquering Spaniards found vanilla in use as a flavor for cacao among the Aztecs of Mexico, and naturally made this plant known to Europe . It was then described and illustrated by Hernandez (314), the “Pliny of the Spaniards,” in his history of Mexico , who described it under both the botanical name, “aracus aromaticus,” and its vernacular name, “tlilxochitl.” Clusius (153) mentions it in 1602 as “lobus oblongus aromaticus.” Pomet (519), in 1694, reports the use of vanilla in France to flavor chocolate and sometimes to perfume snuff. As early as 1721 vanilla was introduced into the London pharmacopeia, and in 1739 Mr. Ph. Miller (437) planted some vanilla specimens (vanilla aromatica, Swartz) in the Chelsea botanical garden. In the West Indies and the adjoining coast of South America vanilla has also long been known.

In 1724 P. Labat (365), a Catholic missionary, reports (from hear-say) the abundant occurrence of vanilla in the “terre ferme” of Cayenne, from which place specimens were forwarded to him in 1697 to Martinique, where he cultivated the plant and observed its habits for eight years. He also planted vanilla in Guadaloupe. In 1750 we owe the first authentic and detailed report on Mexican vanilla. The Mexican Province of Oaxaca supplied the first vanilla export to Spain , and the bean was discovered in this province by De Menonville (Gardeners’ Chronicle, May, 1874) in 1777. Vanilla forests, according to old archives, have been in cultivation at Papantla, near Vera Cruz, as early as 1760.

The species yielding the finest-flavored vanilla, subsequently named vanilla planifolia, Andrews, was imported from America into England by the Rt. Hon. Charles GReville (Hortus Kewensis, Vol. v, 1813), this flowering in his collection at Paddington in 1807 (57). Specimens of this plant were later transferred to Paris and Belgium , from whence the botanical gardens of Reunion (Bourbon) and Java were supplied. In 1830 Neumann introduced the artificial fecundation of Vanilla planifolia in the Jardin des Plantes at Paris , and in 1837 Professor Morren did the same at Liege (239). The Java plantation, started in 1841, now supplies the Dutch market solely.
The Reunion plantation, according to Delteuil, was started by Perrottel in 1839 (239). The cultivation of vanilla for the purpose of export was subsequently introduced into other French colonies – e.g., into Mauritius by M. Richard (550), into Guadaloupe (in 1875), Martinique, Ste. Marie (near Madagascar ), and into Tahiti of the Society Islands . In Jamaica individual attempts to cultivate vanilla are on record. The cultivation in Calcutta , however, according to reports by Dr. King, seems to be a failure. (Phar. Journ. & Trans., Nov., 1876.) Suggestions have been made of a more energetic prosecution of the vanilla culture in Jamaica , in Venezuela , and Guiana; also of an introduction of this article into the extreme southern parts of the United States , Florida , and Texas . For a historical treatise on all the aspects of vanilla and its cultivation see (388) Vanilla planifolia.