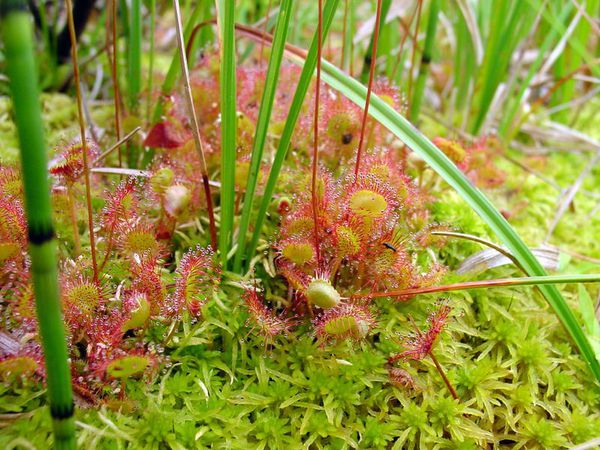 1874: Scudder
We employ a tincture of the fresh plant prepared in Germany , using in in the proportion of: Rx tinture of drosera, gtts.xto 3j.;water, 3/5iv. A teaspoonful every three or four hours.

I sue the drosera as a specific in the cough attending and following measles, especially where there is dryness of the respiratory mucous membranes. An experiene o ten years with it, in a large number of cases, has given me great confidence in the remedy.

We also use it in cases of whooping cough, especially where there is dryness of the air passages, and much irritation of the nervous system. Whilst it is not a remedy for all cases of whooping cough, it is a true specific in those to which it is adapted. I ahve often seen a serious case of the disease relieved in twenty four hours, and an entire arrest of the cough in two weeks.

We also employ it in cases of chronic cough, with dryness of the air passages and nervous irritation, with much advantage. It makes little diferene whether it arises from bronchial irritation or inflammation or phthisis, if associated with irritation of the basilar portions of the brain, and pneumogastric.

Indications: Dryness of mucous membrane of the respiratory tract, with irritation of the nervous system.

Spasmodic cough of an explosive nature, hoarse cough without secretion.

Use: Relieves coughs of sympathetic origin, nervous coughs. Our best rmedy for cough in measles and following measles. Valuable in whooping cough. In chronic coughs of dry, irritating nature, especially if there is irritation of the central nervous system. Of value in some forms of gastric disorder.

1909: Felter and Lloyd: DROSERA – SUNDEW
History – Sundew (Ros Solis) is a peculiar little plant, growing in Europe an dthis country, in bogs, and muddy shores of ponds and rivers, and flowering in July and August. It may be at once distinguished by the reddish glandular hairs with which the leaves are beset, and which are usually tipped with a small drop of a clammy fluid, appearing like a dew drop, glistening in the sun, this secretion being most abundant when the sun is at its highest, from which circumstance it derives its name. The long, shining red hairs of this plant form beautiful objects for the microscope, under which they are seen to consist of an immense number of minute cells, regularly arranged, and exhibiting a most gorgeous variety of brilliant colors. They are very irritable, slowly curved inward, and entrap insects within their reach; the fluid secreted from their points also retains insects which settle upon it. The flowers only open in sunshine. The juice of the plant is bitter, acrid and caustic. The medicinal preparation is the tincture of the recent plant.

Action, Medical Uses, and Dosage – This agent appears to exert a peculiar action upon the respiratory apparatus, and its effects are best observed from the use of small doses. It is peculiarly adapted to dry, spasmodic, or explosive coughs, such as are met with in many cases of whooping-cough and measles – for the cough of the latter it being an almost absolute specific. The coughs met by drosera are those in which dryness of the air passages is marked, and there is irritation or even inflammation, and nervous irritation, particularly irritation of the base of the brain and of the parts supplied by the vagus. The special seat of most of the trouble seems to be centered in the larynx. Tickling in that organ, giving rise to spasmodic cough, is met by it, and while exceedingly useful in all coughs having the above characteristics, it appeas to benefit best those cases associated with or following measles and whooping cough. For the latter it may also be given as a prophylactic, and if the individual does contract the disease, the influence of the medicine will have been early obtained. Sanguinarine nitrate acts well with it in dry, tickling cough. It has been found essentially useful in asthma, incipient phthisis, chronic bronchitis, with dry, spasmodic cough, and nervous or sympathetic cough, whether from pulmonary, cardiac, or gastric disease. Two fluid drachms of the saturated tincture, or 1 drachm of specific drosera, may be added to 4 fluid ounces of water (or wine, if indicated), of which a teaspoonful may be administered every 3 or 4 hours. In former times it was considered a powerful aphrodisiac, and as a remedy to cure intermittents, insanity, and to promote delivery. The juice of the plant has been used as a local application for the cure of corus and warts. Dose, of the saturated tincture, 1 to 5 drops; specific drosera, 1/10 to 5 drops.

1911: Fyfe
Cough of meales, whooping cough, bronchial irritation with cough similar to that of measles, coughs choing dryness of the air passagees and nervous irritation. Drosera rotundifolia is tonic, expectorant, antispasmodic, and nervine.

Specific Symptomatology – The field of the influence of this remedy is narrow. it is specific to dry, irritable, persistent cough; also cough of a hoarse, resonant, explosive, or spasmodic character, without secretion.

Therapy – It is an antispasmodic, expectorant, and sedative as applied to such coughs. it will also relieve coughs of sympathetic origin, and so-called nervous coughs. It will cure the cough of measles more quickly than other remedies, and it will cure the after-cough of whooping-cough. It will terminate a whooping-cough and leave the patient free from cough, when the active stage of the disease has passed. It there is a deficiency of bronchial secretion it wil be found of service during the progress of whooping-cough, modifying the paroxysms of the disease; they, occurring less frequently.

It is serviceable in all chronic coughs of a dry, irritating character, especially if the central nervous system be irritated. It is of service in chronic bronchitis and in phthisis pulmonalis.

It has also relieved asthmatic coughs, with nervous irritability. It has been used in a few cases as a sedative and tonic in irritable conditions of the stomach, relieving flatulence and curing mild cases of gastric ulcer.