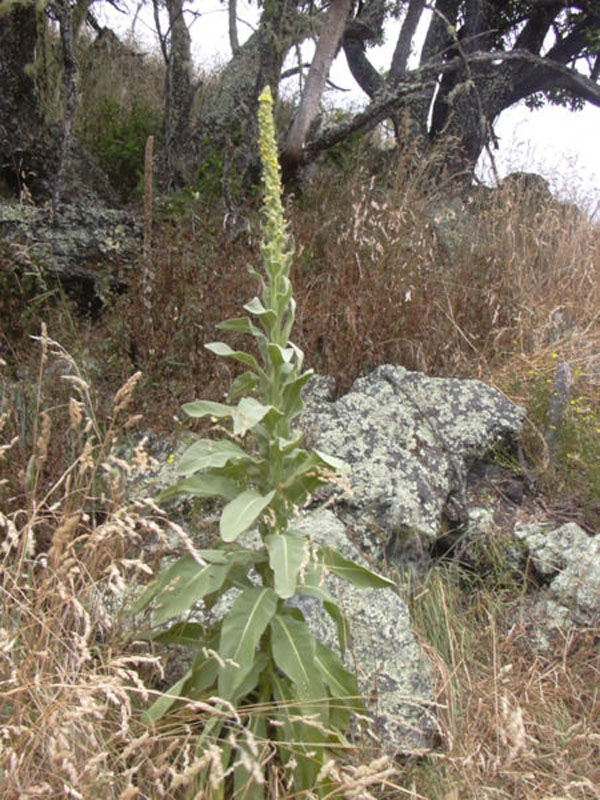 Mullein is a European plant that was brought to the Americas where it quickly became a naturalized citizen. In its native range, it was used for coughs and colds, and especially when the ears were involved. Oils made of mullein were formulated and dropped into the ears to alleviate ear ache and ear infection. However, it also gets mentioned in the traditional European literature as a staying well plant, used as a tonic to inspire strong health. There is interesting as several members of the scrophularia family, primarily from Asia, are used in a similar manner. Though it is not a major player in disease prevention regimens, it might be a candidate in the future.The Eclectic Physicians used it to treat malaria, a disease that literally wore the patient down until there was no life left. It should be researched for its disease preventing capacity.

1854; King J
Properties and Uses. Mullein is demulcent, diuretic, anodyne and antispasmodic. The infusion is useful in coughs, catarrh, hemoptysis, diarrhea, dysentery and piles. Its diuretic properties are rather weak, yet it is very useful in allaying the acridity of urine, which is present in many diseases. It may be boiled in milk, sweetened, and rendered more palatable by the addition of aromatics, for internal use, especially bowel complaints. A fermentation of the leaves also forms an excellent local application for inflamed piles, ulcers and tumors. The leaves and pith of the stalk form a valuable cataplasm in white swellings, and infused in hot vinegar or water, it makes an excellent poultice to be applied to the throat in cynanche tonsillaris, cynanche maligna, and mumps. The seeds, it is said, will rapidly pass through the intestines, and have been successfully used in intestinal obstructions.

1854; King J
Properties and Uses. Mullein is demulcent, diuretic, anodyne and antispasmodic. The infusion is useful in coughs, catarrh, hemoptysis, diarrhea, dysentery and piles. Its diuretic properties are rather weak, yet it is very useful in allaying the acridity of urine, which is present in many diseases. It may be boiled in milk, sweetened, and rendered more palatable by the addition of aromatics, for internal use, especially bowel complaints. A fermentation of the leaves also forms an excellent local application for inflamed piles, ulcers and tumors. The leaves and pith of the stalk form a valuable cataplasm in white swellings, and infused in hot vinegar or water, it makes an excellent poultice to be applied to the throat in cynanche tonsillaris, cynanche maligna, and mumps. The seeds, it is said, will rapidly pass through the intestines, and have been successfully used in intestinal obstructions. They are narcotic, and have been used in asthma, infantile convulsions, and to poison fish. The infusion may be drank freely. The flowers, placed into a well-corked bottle, and exposed to the action of the sun, are said to yield a fine relaxing oil.

1898; Webster
The common mullein has been extolled as a remedy in malaria, and the testimony offered seems to justify a brief notice of it in this place.

During the war of the Rebellion, when the South was blockaded and foreign drugs, among other commodities, were interdicted, a forced resort was had to various indigenous articles, and in malarious districts mullein proved a very efficacious remedy for ague and other malarial affections. The following recipe was then employed successfully:

Beat mullein leaves in an iron mortar, strain, and to the juice add an equal quantity of French brandy; in a wineglass of this mixture put fifteen drops of spirits of camphor, and give just as the chill is coming on. The patient must be warmly covered in bed before it is taken, and continue so for several hours after.

The donor of this recipe, a Southern lady, remarks: When I was told of it my husband had been having chills for seven years. I mean that he had never been free from them more than a week or two at a time during that period. He would not consent to try this until one day, after taking forty grains of quinine, he had a chill which was so severe that we both feared congestion, and he said he would try anything. So after the chill had reached its height, I had the leaves gathered and beaten, and gave him a dose. As soon as he swallowed it the moisture began to break out on his brow, and in five or ten minutes he was in a most profuse perspiration. He had not the least fever, and did not have another chill for fifteen years. I tried it after that in, I suppose, fifty cases, with perfect success. Our physician in the neighborhood (Dr. R. K. T.) used to laugh at me about it very much, but the last time I saw him he told me that during the war, when he could not get quinine, he had to resort to it, and found it most efficacious, not only in cases of chill, but in bilious and typhoid fevers. Another writer, describing a visit to Virginia in early times, refers to a charming hostess as follows: This lady takes great care of her negroes, makes them as happy as their situation will admit, and serves them herself as a doctor in times of sickness. She has even herself made some interesting discoveries in the disorders incident to them, and discovered a very salutary method of treating a sort of putrid fever which carries them off commonly in a few days, and against which the physicians of the country have exerted themselves without success. The successful remedy used here is no less than that homely, but apparently very useful weed, common mullein.

There is testimony enough in favor of this drug to at least justify an investigation as to its merits as an anti-malarial agent, and I suggest that a trial be made of it by some enterprising Eclectic and the result reported to our medical journals – not in a single case but in a round dozen, that a fair opportunity may be afforded for the agent to display its curative powers, even if the first trial should prove a failure.

A preparation may be prepared extemporaneously by breaking off the upper portion of the blossoms of the mullein and putting them into a glass jar and allowing them to stand in the sun for a few days. The mass is then strained through muslin. The juice extracted by the above or other process is called an oil or mulleined oil, but does not possess all the properties of an oil.

The most direct use of this agent is in the treatment of simple uncomplicated cases of deafness, or in the early stages of progressive deafness where the cause is not apparent. In these cases, from two to five drops in the ear, three or four times each day, will stop the progress of the disease, and will cure many simple cases. In its local influence, it softens and facilitates the removal of hardened secretions, stimulating the nerve structures at the same time. It has positive anodyne properties, and is curative in a large number of the ordinary cases of earache in children, acting often more quickly than other an better known agents, and is used with perfect safety, as it has no irritating or toxic properties.

Used in the treatment of ulcerations of the ear, where there are fetid discharges, it is of much value in allaying pain and promoting the action of other antiseptic and healing remedies. In the treatment of the simple ear troubles of childhood, it accomplishes alone that for which complex formulae are otherwise necessary.

Mulleined oil has a wider influence, however, than its use in the disease of the ear. It has been used in rheumatic conditions to an extent, and I am of the opinion that properly developed in this line, it will be found a serviceable remedy. Internally, the specific medicine or the infusion exercises a diaphoretic and diuretic influence, and is soothing to the nervous system.

This agent is often used in irritation and inflammation of the urinary apparatus, acting in harmony with hydrangia, gelsemium or other antispasmodics in stricture from irritation. It is useful also in acute catarrh, either of a specific or non-specific origin, in catarrhal cystitis, and in some cases of pyelitis an dcatarrhal nephritis. It has been used also in bronchial irritation and in asthmatic bronchitis. In uncomplicated asthma, especially the paroxysmal form, mullein leaves, mixed with stramonium and potassium nitrate and smoked through a pipe, will often give prompt relief. The smoking must be suspended if vertigo supervenes.

The agent has long been a domestic remedy in the treatment of rheumatism. A fomentation is prepared from the leaves or the steam from a decoction is confined to the part, or compresses are wrung from a strong infusion of the leaves, and applied.

One-half drop doses of the mulleined oil four times a day has overcome some dribbling of the urine. This remedy seems to be serrivceable as an external application to inflamed glands.

Dr. Mathews says that this is an excellent agent in the treatment of conditions where therei s persistent acridity of the urine, especially if it produces pain or strangury.Verbascum is useful for the treatment of orchitis. It can be used internally and externally.