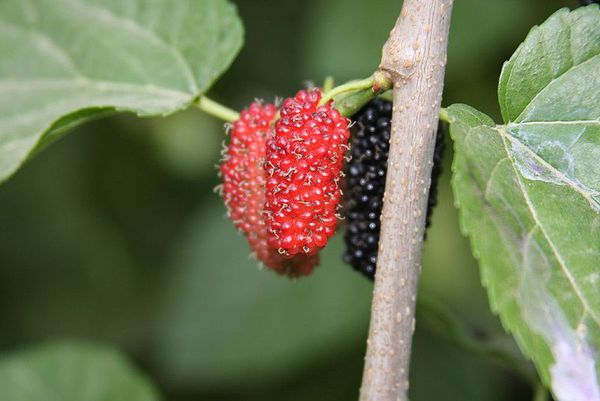 This mulberry is native to Japan and was and is used to feed the silk worm, the worm responsible for making the fiber that is used to make silk. In addition, every part of the tree is considered to have a medicinal use, and on top of that, it produces a tasty fruit.

History and Traditional Uses of Soyo
This mulberry is native to Japan and originally grew wild in the mountains. Early in history it became a cultivated plant, not so much for its fruit, but rather for its leaves. In ancient Japan, the primary cloth was silk- Japanese people relied upon the silk worm for the raw fiber used to make thread and in turn cloth. The silk worm feeds upon the leaves of the mulberry tree. It was for the silk trade the tree was cultivated.

In silk culture, the leaves of the Mulberry tree are picked three or four times a year to feed the growing silk worms. The tree is incredibly strong and has little trouble surviving the constant picking of its leaves. Indeed, in good seasons, its leaves are picked six times!

Due to its usefulness in silk production and its many other uses, ancient Japanese society held the tree sacred!

The oldest Chinese herbal, “Shinnouhonzoukyou” (Divine Husbandmans’ Classic of Materia Medica) published 1400 years ago, mentions the leaves, fruits, and roots of the mulberry tree. In Chinese medicine, the leaves are seen as antipyretic and antitussive, the fruits as tonic and analgesic, and the roots as diuretic, antipyretic, and antitussive.

A famous Japanese medical text oddly entitled, “How to take care of yourself by drinking tea” written by the Japanese Buddist monk Eisai, in 1211 AD, has something interesting to say about mulberry leaves. He states that mulberry is excellent for the people suffering from thirst. In the contemporary world we know he was referring to the thirst associated with diabetes. Research has shown that the monk was quite right in his use of this plant.

In the contemporary world diabetes is increasingly a problem. Amazingly, the traditional Japanese treatment for diabetes, Mulberry leaves, has been validated. But, to understand Soyo, one has to understand a bit of anatomy and physiology.

After we eat carbohydrates (bread, potatoes, pasta etc.), they move from mouth to stomach, then onto the duodenum and finally into the small intestine. As carbohydrates pass through the digestive tract, they are broken down into smaller and smaller sugars or polysaccharides. By the time the polysaccharides have made their way into the small intestine, they have been broken down to disacharides (disacharide means two sugars hooked together). These disacharides are then broken down into the simple or single sugars glucose and fructose by the enzyme α-glucosedase. These simple sugars then pass through the walls of small intestine and into the blood stream. As these simple sugars move into the circulation blood sugar levels rise. This is why blood sugar levels increase after a meal.

With this understanding of how the body works and doesn’t work, Soyo’s contribution to diabetes treatment will make a lot more sense.

In an animal experiment, rats with diabetes were fed mulberry leaves. The study showed that when the rats were fed the leaves, their blood sugar levels went down. The study established that the mulberry leaves caused an increase in insulin production which in turn caused a reduction in blood sugar levels. This exciting discovery lead to more research.

A water soluble compound, 1-deoxinojirimycine (DNJ) found only in mulberry leaves, was established to be responsible for this action. In the small intestine DNJ binds with α-glucosedase. With this enzyme out of action, sugars are not carried across the intestinal wall and into circulation. Without this enzyme to facilitate sugar absorption, most of the sugars pass out of the intestinal tract without being absorbed. In effect. Mulberry blocks sugar absorption.

Practitioner Recommended Uses of Soyo
Soyo leaves prevents carbohydrates from being absorbed by the body. This ability makes the herb of use to two distinct populations. Firstly, for diabetics who need to keep their blood sugar levels down. Secondly, with its ability to block sugar absorption, Soyo is a perfect herb for those looking to lose weight. This activity has a number of interesting possibilities for people on weight loss regimes and for diabetics trying to keep blood sugar levels down. To reduce carbohydrate absorption, mulberry leaf tea or extract should be taken just before eating.