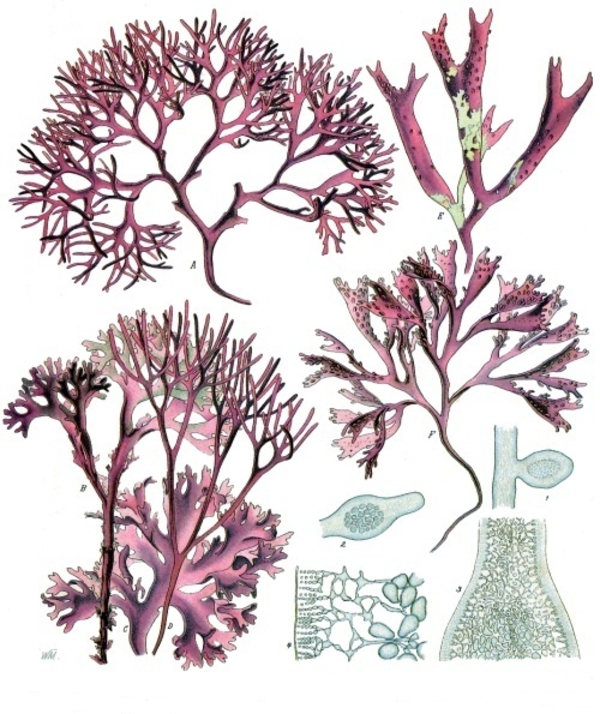 History
Chondrus crispus is a maritime algae found growing close to the shores of both the Old and New World . Its pharmaceutical name, Carrageen, comes from the town in Ireland where the official drug was collected in the last century. It contains muco-polysaccharides that rapidly go into solution when heated in water. Owing to this facility, it was used widely in medicine and as a culinary item. The drug was used to prepare Blanc-mange, a formerly popular desert.

In the British Isles , Chondrus was used for a variety of complaints including pulmonary and urinary tract affections. Most significantly, it was used to speed convalescence and to stabilise wasting diseases. (6) In the Caribbean Islands , residents report it to be a powerful vitality boosting drug, restoring physiological functions in those taken low by disease or age. Throughout that region it is a popular aphrodisiac said to increase male strength and virility. The drug was official in the National Formulary.

Indications
Irritable states of the larynx and intestinal canal, irritable conditions of the kidneys and bladder.

Disorders of the kidneys and bladder, acute and chronic irritation and inflammation of the urinary organs, rachitis.

The drug was used to raise resistance to all chronic diseases (tuberculosis, autoimmune disease, chronic pectoral conditions), and debility.

Chondrus crispus is extensively used in the food and pharmaceutical industry. It contains large quantities of gelling polysaccharides, which makes it of use in the manufacture of dairy deserts (ice cream, yoghurt, etc.). Carrageenan, a Chondrus extract, is also an article of trade used widely by the food manufacture industry. Due to its widespread use,

Chondrus and the polysaccharides it contains have been widely studied and determined to be innocuous. (7)

Clinically, Chondrus crispus was used to raise resistance to acute and chronic digestive, respiratory, and urinary disease. An infectious agent (bacterial or viral) or autoimmune disease could cause the disease. (1–5)

Experimentally, Chondrus crispus has been found to act as an immune stimulant. (7)

Experimentally, Chondrus crispus has been determined to act as an immune stimulant and immune depressant. It has been found to inhibit and promote gastric acid production. Carrageenan has been shown to lower blood cholesterol, reduce gastric secretions, food absorption, increase water content of the gut, to act in both an immuno-stimulatory and inhibitory manner, to act as an anti-coagulant, hypotensive agent, to alleviate peptic and duodenal ulcers in humans, to inhibit pepsin in vitro and to have an anti-proteolytic activity against papain. (7)

Discussion
Chondrus crispus exhibits properties consistent with Brekhman’s definition of an adaptogen. It is innocuous; it raises resistance to a wide assortment of biological challenges, and normalises physiological function. Chondrus crispus was primarily used the body could no longer maintain resistance to chronic disease and State of Exhaustion set in. Its almost specific indication was State of Exhaustion .

Potential Clinical Applications
Chondrus crispus may have a role supporting patients resisting chronic disease. Being rich in protein, fat, carbohydrates and micronutrients it can be seen as an easily assimilated balanced food. Beyond this, it may support the patient resisting or having lost resistance to chronic disease through GAS augmentation.

Future Research
• Chondrus crispus and the GAS. The drug should be tested out in the animal model to determine its effect on the GAS.
• Chondrus crispus and wasting. The drug was specifically used in the treatment of wasting conditions; it would be useful to examine its role in raising resistance to the catabolic states associated with State of Exhaustion .
• Chondrus crispus and digestive disease. The drug was used to increase resistance to digestive disease. Specifically, it was used when digestive abnormalities were a primary manifestation of State of Exhaustion . Its role in raising resistance to stress related gastric dysfunction should be examined.
• Chondrus crispus and sexual dysfunction. The drug was used to increase sexual vitality and prowess in the chronically ill and the healthy. One of the signs of State of Exhaustion is lack of libido and sexual dysfunction. Its role in raising resistance to stress related sexual dysfunction should be examined.
*Researchers should use either the whole drug or if a fraction is to be used, it should be a high molecular weight fraction. The reason is this. Chondrus crispus is rich in sulphated straight chain galactans composed of residues of d-galactose and 3,6-anhydro-d-galactose with a molecular weight between 100,000 and 500,000. Large molecular weight extracts are considered food safe whereas some of the degraded polysaccharides (molecular weight of 20, 000 or less) have been shown to cause necrosis in test animals (ulceration of duodenum and colon). (7)

Eco-availability
The drug is abundant in the wild and readily cultivated.