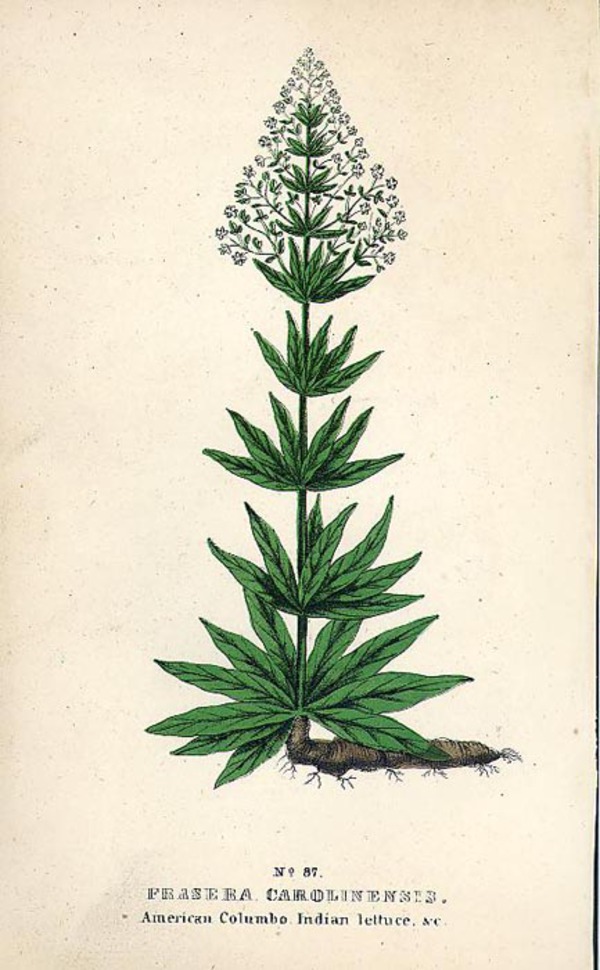 This remedy has been but little used, and that little has been of the dried root as a tonic. The recent root possesses quite active properties, and is likely to repay investigation. It is stimulant to the circulation, and will doubtless exert the same influence upon all the vegetative functions. Will some one give it a thorough study and report?

Therapeutic Action – American Columbo is tonic, laxative, antiseptic and febrifuge, when properly dried; emetic and cathartic, in its recent state. It is a mild, pure, simple bitter, and a very valuable tonic, and may be prescribed in all cases where a simple, pure tonic is indicated. Many think it fully eual to the imported columbo, as a tonic, and it is extensively used in the Western States as a substitute for that article; while others regard it as far inferior to it as a remedial agent in the various cases in which that is employed.

SPECIFIC FRASERA WALTERI, or American Columbo, is entirely different from official Columbo root, and care must be taken not to confuse them with each other.

This is an indigenous plant with a small stem from four to eight feet high, and a yellow root. Use the root. Dig it when two years old, in the fall, remove the dirt, cut it into ? and dry it in the shade. It makes a good unirritating tonic, stimulant and astringent. It controls ? sweating and diarrhoea. It is a good tonic in dyspepsia. In the latter stages of fevers, and in the latter stages of dysentery. It is of much value in chronic diseases of the digestive organs when the stomach feels loaded after eating.

Atonic disorders of the urinary organs and of the breathing apparatus, attended with marked debility, are benefitted by Frasera.

Make a tincture by using eight ounces of the root to one pint of fity per cent, alcohol. Dose, from a few drops to a teaspoonful.

1909: Felter and Lloyd: FRASERA – AMERICAN COLUMBO
History and Description -This plant grows west of the Alleghanies, on the borders of lakes and in the rich soils in the middle and southern states, bearing flowers in June and July, which, however, together with the stems, are not developed until the third year, the root-leaves only, in the meantime, being visible. The part used is the root, which should be gathered in October and November of the second year of the plant, or in March and April of its third year; it is hard, fusiform, an dwrinkled; as met with in commerce it is in dried, transverse slices, with a brown epidermis slightly tinged with red, yellow cortex, and a spongy, straw-colored center. its taste is bitter, and its properties are taken up by wine, water, or alcohol of sp.gr.0.935. The root of this plant has been mistaken for that of calumba, but it may be determined from the latter, which, on account of the starch it contains, strikes a blue color with tincture of iodine, while the American plant undergoes no change of color. Sulphate of iron produces a blackish-green color with an aqueous solution of the American root, but does not affect the foreign root. Tincture of galls gives a dirty-gray precipitate when added to the tincture of calumba. A transverse section of calumba shows a series of concentric circles, with diverging lines, which are absent in the American root. Sliced frasera root has been sold as American Gentian.

Action, Medical Uses, and Dosage – The recent root of American columbo is said to cause pruging and vomiting; but when dried it is a simple tonic, which may be used wherever mild tonics are indicated. Dr. Scudder (Spec. Med., 139), regards it a “stimulant to the circulation”, and states that it “will doubtless exert the same influence upon all the vegetative functions.” Obstinate constipation has been relieved by its persistent use. Dose of the powder, from 20 to 60 grains, of the infusion, from 1 to 4 fluid ounces, 3 or 4 times a day; of specific frasera, 5 to 30 drops, well diluted, every 2 to 6 hours.

Therapy – This agent operates upon the stomach and digestive apparatus directly, influencing the tone of the glandular organs of the entire digestive tract. It is a stomachic tonic of considerable power, exercising its best influence when the apparatus is impaired by protracted disease. Under these circulstances it is also a stimulant and astringent to the secreting surfaces, correcting excessive night sweats common to such a condition, controlling the diarrhoea and dysentery where there are relaxed and atonic mucous membranes.