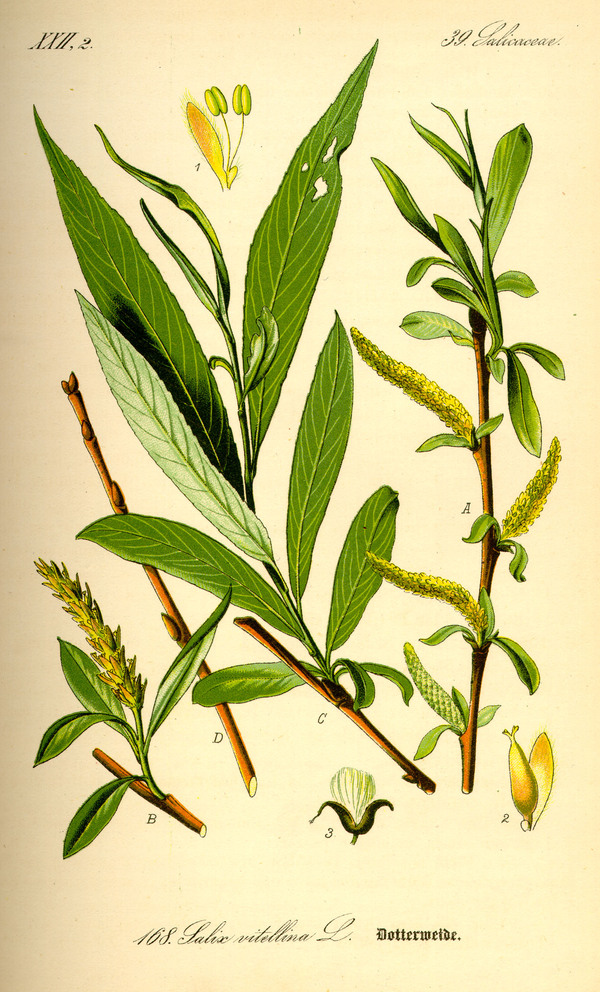 The white willow is a long used medicinal plant, rich in aspirin like compounds. It was formerly used in many of the ways we use aspirin today, to reduce inflammation and to reduce fever. But, in addition to these simple actions, white willow inspires the body to heal itself.

History
Salix alba was known to the Ancient European writer’s medical writers and appears in many of the older medical works. According to Gerard, willow was used as an astringent and refrigerant and was useful in haemorrhages, in both men and women. (8) Prior to the age of colonialism, Salix alba was a European treatment for malaria. During the early years of colonialism, it was still used to treat malaria and was considered a reasonable substitute for Cinchona rubra. During the colonial period, Salix alba became naturalised in North America . The tree was first planted along the East Coast and in time spread throughout North America . The colonials used the drug as it had been used in Europe , to quell fever and aches and pains.

Indications
“Atonic conditions of the gastro-intestinal tract, especially where there is increased mucous secretion and a tendency to fetor or fermentation; passive hemorrhage; chronic diarrhea and dysentery. Diarrheas of children, typhoid conditions and intermittent fever are among the diseases most likely to present indications for this remedy. Salix alba is tonic, antiperiodic, and astringent.” (5)

Digestive
Chronic diarrhoea, dysentery, dyspeptic conditions when accompanied with or dependent upon debility of the digestive organs, worms, atonic conditions of the gastro-intestinal tract, especially where there is increased mucous secretion and a tendency to fetor or fermentation, diarrhoea of children, typhoid conditions, poor tone of the gastrointestinal tract and glandular organs, gastric catarrh, catarrhal diarrhoea.

State of Resistance
The drug was used to raise resistance to malaria, typhoid fever, and acute rheumatism.

Adaptation Energy
From Selye’s perspective, the drug increased adaptation energy. Evidence to this effect includes the following. The drug was used to speed convalescence by increasing the recuperative capacity. It was used to increase resistance to infectious disease. It was used to bolster patients in State of Exhaustion . Lastly, it was used topically to inspire old, foul, and cold ulcers to normal healing.

Brekhman’s Adaptogen Citerion
An adaptogen should be innocuous and cause minimal disorders in the physiological functions of an organism.

The drug is reported to be innocuous in Eclectic and contemporary literature. (1–7)

Discussion
The drug exhibits properties consistent with Brekhman’s definition of an adaptogen. The drug is innocuous; it raises resistance to a wide assortment of biological threats, and normalises physiological function.

.Salix alba is an old European drug used to raise resistance to infectious disease. Since the beginning of recorded history the drug has been used to treat feverish conditions. Indeed, the use of Salix alba as a febrifuge lead to the discovery of salicylic acid, or aspirin. Though the drug was well known and well understood prior to the commencement of the Eclectic movement, the Eclectics did contribute to the knowledge of this drug.

Eco-availability
The drug is widely available in the wild and is readily grown.

1854; King J; (Materia Medica) – SALIX ALBA
Properties and Uses. – Willow-bark is tonic and astringent, and has been employed as a substitute for Peruvian bark in intermittent fever, to which, however, it is inferior. In chronic diarrhea and dysentery, the tonic and astringent combination of the willow, renders it very eligible. It may be given in substance, in doses of one drachm of the powder, repeated as indicated; or of the decoction, one or two fluidounces, four or five times a day. The decoction has also proved efficacious as a local application to foul and indolent ulcers.

Therapeutic Action – The willow bark is tonic, stomachic, antiperiodic, astringent, and antiseptic. It possesses very energetic tonic properties, associated with astringency. It has been resorted to as a substitute fro Cinchona in the treatment of intermittents – its action upon the system being similar but feebler, and like that of Cornus florida . It has been exhibited with advantage in dyspeptic affections, when accompanied with or dependent on debility of the digestive organs.

Dose – As a tonic in general debility, one or two grains four or five times daily; as an antiperiodic, five to ten grains five or six times daily; or from forty to sixty during the intermission, to be given in substance.

Therapeutic Action – Salicine is tonic and antiperiodic. Much discrepancy of opinion obtains among medical men relative to the efficacy of Salicin or Salieine is diseases of periodicity. While some have regarded it not only as equal but superiod to the suphate of quinine as an antiperiodic, others have ascribed to it but feeble antiperiodic powers. There can be no doubt that is is possessed of valuable tonic properties, as as such may be prescribed in cases of general debility, in dyspepsia, intermittents, remittents, and in rheumatism showing evidences of periodicity. It has been claimed to exert the same influence over theumatism as salicylic acid, and in some cases to be better.

1898: Felter and Lloyd – SALIX – WILLOW
Action, Medical Uses, and Dosage – Willow bark is tonic, antiperiodic, and an astringent bitter. It has been given in intermittents, dyspepsia, connected with debility of the digestive organs, passive hemorrhage, chronic mucous discharges, in convalescence from acute diseases, and in worms. Although occasionally substituted for the cinchona bark, it is inferior in activity. In chronic diarrhoea and dysentery, the tonic an dastringent combination of the willow renders it very eligible. It may be given in substance, in doses of 1 drachm of the powder, repeated as indicated; or of the decoction, 1 to 2 fluid ounces, 4 or 5 times a day. The decoction has also proved efficient as a local application to foul and indolent ulcers.

1901: Locke
The bark is bitter and its properties tonic,antiperiodic, astringent, and antiseptic. As an antiseptic it is used in low forms of fever. It is an antiferment and destroys bacteria. If may be employed in large doses with safety. if it is very good in the acute forms of rheumatism where salicylic acid fails to cure. fiven in sufficient doses of from five to thirty grains. both salix and salicin are good gastric tonics.

1911: Fyfe
Atonic conditions of the gastro-intestinal tract, expescially where there is increased mucous secretion and a tendency to fetor or fermentation;passive hemorrhage;chronic diarrhea and dysentery. Diarrheas of children, typhoid conditions and intermittent fever are among the diseases most likely to present indications for this remedy. Salix alba is tonic, antiperiodic, and astringent.

Therapy – This to an extent is antimalarial and like the other agents of this class it improves the tone of the gastro-intestinal tract and the glandular organs. It corrects impaired conditions of all mucous membranes and is thus of value in excessive catarrhal discharges from these membranes, being freely given in bronchorrhoea, gastric catarrh, catarrhal diarrhoea and in leucorrhoea, in all cases acting more promptly if malarial conditions have caused the existing debility. It has antiseptic properties, of course, if anti-malarial, and is a good remedy in protracted fevers.

It has a mild influence in controlling passive hemorrhages, but cannot be depended upon if they are severe.

Its antiseptic properties are apparent in its ability to correct the fetor of wounds and offensive discharges when locally applied.

Felter and Lloyd, in the American Dispensatory, make the following statement concerning the action of this remedy, which is important. Its field of action in those functional wrongs of the reproductive organs is due most largely to undue irritability of the parts and thought to be less due to mental or emotional causes. However, sexual passion from any functional cause is moderated by it, and it is especially adapted to the disorders of the sexually intemperate male or female and of the youth, subject day or night to libidinous suggestions and lascivious dreams terminating in pollutions, while for those extreme forms of sexual perversion, satyriasis, erotomania and nymphomania, it is more nearly specific than any other agent. Not only does salix nigra act as a check to sexual passion and misuse, but it proves a useful tonic and sedative to many conditions following in the wake of sexual intemperance, among which may be mentioned spermatorrhoea, in its varied forms, prostatitis, cystitis and ovaritis.

Description – A crystalline body, occurring in white or colorless, shiny, silky needles, or in crystalline powder having a bitter taste but odorless. It is soluble in water which contains an equal part of alcohol, at sixty degrees Fahrenheit. Dose, from two to ten grains.

Specific Symptomatology – Periodicity in fevers, with prostration. Intermittent or remittent fevers, accompanied by rheumatic manifestations. It is a sedative to fevers, where intermittency or rheumatism are present. Some physicians use it indiscriminately in fevers.

Therapy – Physicians who are in the habit of prescribing this remedy and have had experience with it, claim for it a wider field than is exercised by other remedies of this class. They claim that it will control fever, even when malaria is not present. While some class it with quinine, they claim that it has a much milder, and less irritating effect than quinine, which is exercised with equal positiveness. It is especially advantageous where there is periodical neuralgia with feebleness, cold skin, and feebleness of the circulation. In sciatica, lumbago and in the various forms of rheumatic neuralgia, or myalgia, it is a valuable remedy. As a restorative tonic, during convalescence from prostrating disease, it has been favorably used, and is highly spoken of. There is no doubt that the rmedy better known will be found to be an important one. It should have more extended investigation. While not in common use, this agent is a reliable one, and important and deserves further investigation.