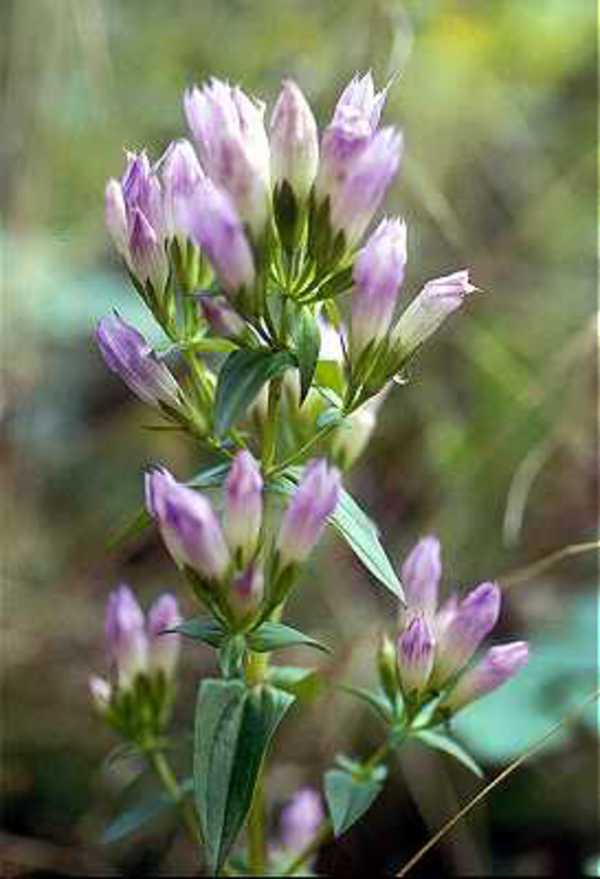 History and Description -This plant was recommended as a substitute for quinine, the root being employed. As found in the market, under the above name, it is about the size of senega, has the general appearance of this root, excepting the angled form and ridge. It has a smooth bark, which is light-yellow externally, and white within. It breaks with a clear fracture and is hard and woody. The taste is very bitter, resembling the Apocynums rather than Gentiana lutea. It has never been chemically examined. The plant grows in woods and pastures, flowering in September and October, and is found from Vermont to Pennsylvania .

Action, Medical Uses, and Dosage – Gentiana quinqueflora, Five-flowered gentian, sometimes called Gall-weed, on account of its intense bitterness, has been found of much service in headache, liver affections, jaundice, etc., and is greatly superior in its action to the official root. This is certainly a valuable tonic and cholagogue, and deserves further investigation. It is regarded a valuable agent in chronic gastro-intestinal atony. Dose of a saturated tincture of the recent root, from 5 to 40 drops.

1898: Webster GENTIANA QUINQUEFLORA
This drug is highly extolled in some quarters as a remedy for chronic debility of the organs of digestion and assimilation. It has proven a reliable remedy for the treatment of chronic ague, and may be used with satisfaction after convalescence from this disease, to improve the digestive and assimilative powers and prevent relapse.

Form for Administration- A saturated tincture of the recent root.

Dose- From five to twenty drops.

Gentian, Gentiana lutea, is indigenous to the mountainous parts of Middle and Southern Europe, being found in the Pyrenees, the Islands of Sardinia and Corsica, the Alps , and elsewhere. It is not, however, found in the British Islands . Gentian is mentioned by both Pliny (514) and Dioscorides (194), its name being derived from Gentius, a king of Illyria , B. C. 180. Throughout the Middle Ages gentian was used as a domestic medicine and as an antidote to poisons, and in recent times it has been commended as an antidote or substitute for tobacco. In 1865 a very popular “Tobacco Antidote,” twenty-five cents for a two ounce package, was found by this writer to be a mixture of licorice root 3 parts, and gentian 1 part. The promoting advertisement claimed that if chewed instead of tobacco, within a reasonable time it “antidoted” the desire for tobacco. Be it remakred that about that date “fine cut” chewing tobacco (shredded leaf) was introduced to replace “plug” tobacco.

Tragus (650) employed the dried root of gentian 1552 A. D. for the purpose of dilating wounds. Gentian is now in common use in medicine as a bitter tonic.