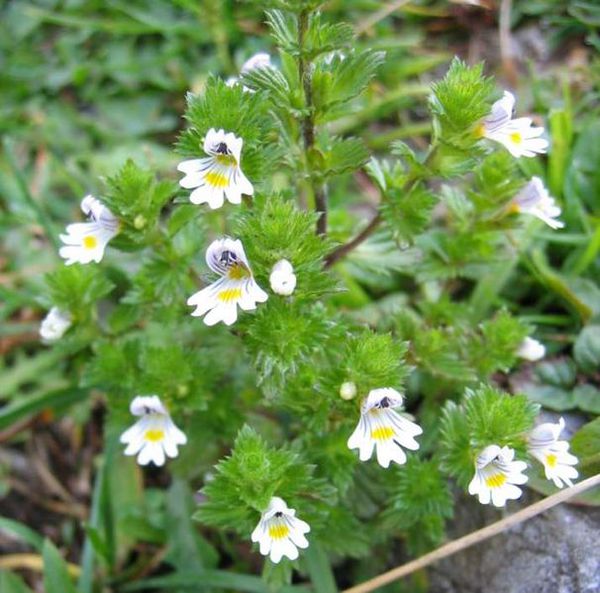 1854: JOHN KING – EUPHRASIA OFFICINALIS – EYEBRIGHT
Properties and Uses – Slightly tonic and astringent. Used with much benefit in the form of infusion or poultice, in catarrhal opthalmia; also of service in all mucous diseases attended with increased discharges; and in cought, hoarseness, earache, and headache, which have supervened a catarrhal affections.

Use: This remedy is useful where there is an irritation of the mucous membrane of the upper respiratory tract, when accompanied
by a thin, watery discharge. Profuse secretion of a watery nature from the nose and eyes. We therefore think of it in acute catarrhal inflammation of the mucous membrane of the upper respiratory tract with above indications, in acute coryza, coryza of measles. In snuffles of infants 5 to 10 drops in 4 ounces of water, a teaspoonful given every 1/2 to 2 hours will soon give relief. It has a marked action on inflammatory conditions of the lachrymal apparatus. Therefore of value in acture inflammation of the eyes; whether catarrhal or rheumatic, and in sore eyes from measles.

1909: Felter and Lloyd: EUPHRASIA – EYEBRIGHT
History and Chemical Composition – This is a small plant, indigenous to Europe and this country, bearing white or red flowers in July. The recent leaves are commonly employed; they are inodorous, but of a bitter, astringent taste. Water extracts their virtues. Enz (1859) examined the recent plant. He found it to contain mannit, grape sugar, volatile oil in small amount, an acrid, bitter principle, cellulose, and other plant constituents, besides a number of acids of organic character, and tannin, the latter giving a dep-green coloration with ferric compounds, and a bright light-green reaction with the salts of lead.

Action, Medical Uses, and Dosage – Slightly tonic and astringent. Used with much benefit in the form of infusion or poultice, in catarrhal ophthalmia; also of service in all mucous diseases attended with increased discharges; and in cough, hoarseness, earache, and headache, which have supervened in catarrhal affections. It appears to specifically influence the nasal membranes and lachrymal apparatus. In acute catarrh (fluent coryza), in which there is a profuse watery flow, it exerts its most specific action. It will not only be found of great utility to control inflammatory and catarrhal phases of the parts during or following an attack of measles, but will tend to avert unpleasant after-effects, as catarrhal conjunctivitis, nasal catarrh, catarrhal deafness, etc. Catarrhal diseases of the intestinal tract may be treated with euphrasia. Four fluid ounces of the infusion taken every morning upon an empty stomach, and also every night at bedtime is asserted to have been found successful in curing epilepsy. Such extravagant statements are not calculated to inspire confidence in the use of medicines. Dose of specific euphrasia, 1 to 60 drops; the infusion (3i to aqua Oj), 2 fluid drachms to 4 fluid ounces.

Specific Indications and Uses – Acute catarrhal diseases of the eyes, nose, and ears; fluent coryza with copious discharge of watery mucus. “Secretion of acrid mucus from eyes and nose with heat and pain in frontal sinus” (Scudder).

1911: Fyfe
Acute rheumatic, catarrhal or scofulous inflammation of the eyes, all diseases of the mucous membranes attended with increased discharges, profuse secretion of the mucous from the eyes and nose, especially when there is heat and pain in the frontal region.

In acute colds in the head, this remedy, when given in doses of ten drops every two or three hours, will soon effect a cure. It is especially adapted to the colds of young children, and is promptly effective in the snuffles of infants.

Euphrasia officinalis is tonic and astringent.

Preparations – Specific Medicine Euphrasia; dose from one to sixty minims.

Specific Symptomatology – The sphere of action of this agent is upon irritating and catarrhal disease; first, of the upper portion of the respiratory tract, and afterward of the mucous structures of the throat, and bronchial tubes. It is more immediately beneficial if the discharge is thin and watery – fluent. “Snuffles” in infants demands this remedy.

It is specific to acute disorders of the nasal mucous membranes. It is especially applicable in children’s cases, but is curative also in adults. Where there is watery discharge from these membranes, where there is earache, or headache, and especially if the distress be across the eyes, in acute catarrhal affections, it has a direct influence upon the lachrymal apparatus.

Therapy – In cough and hoarseness, where there is a thin bronchial discharge, it is applicable especially to the catarrhal manifestations following measles. It will prevent other sequlae of measles, as catarrhal conjunctivitis, catarrhal deafness, and chronic nasal catarrh. It is indicated where there is abundant secretion of thin acrid mucus, from the eyes and nose, with pain and heat in the frontal sinus.

It is especially indicated in that form of recent colds that spend their force on the mucous surfaces of the nose and throat with fullness of the frontal sinus.

In acute coryza the agent exercises a specific action. It should be given in ten drop doses of the tinctue every hour or two. In “snuffles,” so called in very young infants, five or ten drops of the tincture may be dropped into a half of a glass of water, and a teaspoonful given every ten, fifteen or thirty minutes. Relief is often immediate. In the coryza of measles it is of much benefit, and the bronchial and pulmonary irritation caused by this disease is ameliorated also by its use.

A reliable indication is a red and watery condition of the eyes – irritation of the lachrymal structures. Any unpleasant after influence of measles upon the eyes is relieved by the use of Euphrasia. Its internal use will benefit many cases of conjunctivitis, especially those of recent origin in children. The specific indications for this agent, plainly suggest its use in certain well marked cases of epidemic influenza. it should be given a careful, thorough trial in this, often most serious disorder.

A writer reports a chronic case of catarrh, in which the patient for many months had seemed to be persistently renewing an acute cold in the head. There was persistent sneezing, a constant inclination to blow the nose, and a profuse watery secretion which, when lying down, continually ran from the posterior nares. Five drops of specific euphrasia every two hours, cured this patient within a couple of weeks. In children the smaller dose is preferable, and a dose of ten drops will cure most of the acute cases. But some of the chronic cases will not be benefited until they are given large, full doses. it is claimed also that it has cured chronic catarrh of the intestinal tract.

It is excellent also as a collyrium in blepharitis, and conjunctivitis, twenty drops in four ounces of water applied freely. It is given internally at the same time. it is a tonic, improves the appetite, and conduces to a general sense of well being.

It is asserted that epilepsy has been successfully cured by giving four ounces of an infusion of this remedy, upon an empty stomach, every night at bed time.