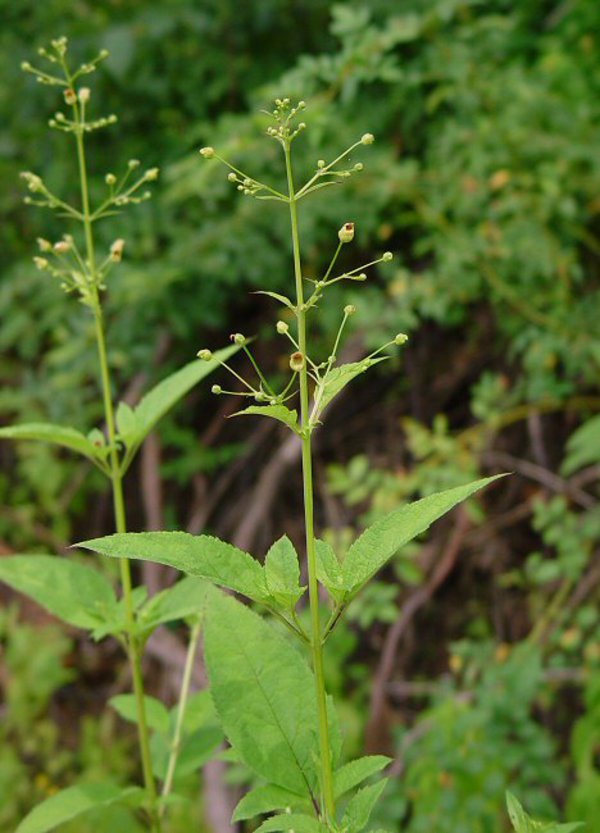 Scrophularia is closely related to mullein and rhemania, and likes its relation, has been used throughout history to stimulate the body to heal itself. This American native was first used by the native Americans and then later by the Eclectic physicians.

The scrophularia stimulates waste and excretion and is probably as certain in its action as any of our vegetable alteratives. Beyond this it seems to exert a marked influence in promoting the removal of cacaplastic deposits. We employ it in scofula, in secondary syphilis, in chronic inflammation with exudation material of low vitality, and in chronic skin diseases. In the later case it is frequently used as a local application, as well as an internal remedy.

It exerts an influence upon the urinary and reproductive organs, ans has been employed in some obscure affections of these with advantage. Still it is feeble and slow, and too much must not be expected from it.

1883: Scudder: (alterative)
(The leaves and roots of Scrophularia Marylandica)

Therapeutic Action – It is said to be alterative, disretic, emmenagogue, discutient, vulnerary, emetic and cathartic.

In chronic cutaneous diseases, used both internally and topically, it often affords relief. Obstinate ulcers, the result of a depraved state of the fluids and solids, are frequently benefited by its use. Secondary or ternary syphilis calls for its exhibition. In chronic glandular diseases and visceral obstructions, it has been found eminently beneficial, especially in hepatic torpor, and other morbid or deranged states of that viscus. In menstrual obstructions or irregularities, dysmenerrhoea, etc., some esteem it almost a specific.

Scrophularia is applied topically as a local anodyne, discutient, or resolvent an dvulnerary agent. The fresh or even dried leaves may be bruised and simmered in milk and applied to cuts, bruises, painful and irritable ulcers, piles, swelling of the mammary glands, local inflammations, cutaneous eruptions, and abrasions of the surface, to relieve pain, allay irritation and inflammation. The root is also made into a poultice or fomentation, and employed to discuss indolent tumors and glandular swellings.

1898: Felter and Lloyd – SCROPHULARIA – CARPENTER’S SQUARE
Action, Medical Uses, and Dosage – Figwort is alterative, diuretic, and anodyne; reputed highly beneficial in hepatic diseases, scrofula, secondary syphilis, cutaneous diseases, dropsy, and as a general deobstruent to the glandular system, when used in infusion or syrup. Prof. Goss valued it highly in conditions coming under the head of struma, when the fluids and solids are depraved, and ulceration readily follows contusions. Externally, in the form of fomentation, or ointment, it is valuable in bruises, mammary inflammation, ringworm, piles, painful swelling, itch, and cutaneous eruptions of a vesicular character. The root, in decoction, and drank freely, is said to restore the lochial discharge when suppressed, and to relieve the pains attending difficult menstruation. This plant possesses valuable and active medicinal properties. Its alterative properties are pronounced, though the remedy is very slow to produce its effects. Dose of the infusion or syrup, from 2 to 4 fluid ounces; fluid extract, 30 to 60 drops; strong tincture (3viij to alcohol, 76 per cent, Oj), from 10 to 40 drops.

Specific Indications and Uses – Struma; ulcerations about the eyes, ears, nose, or face; inclination to ulceration from abrasions or contusions; enlarged lymphatics, with perverted nutrition; full lips, pink and white countenance, with fullness or puffiness of the alae nasi; epiphyseal thickenings and fullness of the joints (Goss, Drugs and Med. of N.A., Vol.II, p.115).

Constituents – According to Prof. Lloyd, there is present an alkaloid, a fixed oil, and a brown amorphous resin. From the alcoholic extract an amorphous, yellow powder has been obtained, which has some of the properties of digitalis.

Preparations – A fluid extract is prepared, and a tincture. Specific scrophularia may be given in doses of from five to thirty drops.

Specific Symptomatology – Marked evidences of cachexia. Depraved blood from any cause; glandular disorders of a chronic character, accompanied with disease of the skin. Ulcerations, eczema, excorations from chronic skin disease. Those cases in which therei s a peculiar pinkish tint, or pink and white tint to the complexion, with puffiness of the face, with full lips of a pallid character, are benefited by this remedy.

Therapy – The agent is administered in that class of cases, with the indications named, where a pure blood alterative is demanded. It sinfluence is perhaps more general than that of some of the better known remedies, but demands more time in the accomplishment of its results.

In disease of the glandular organs, resulting in dyscrasia; in general scrofula, in some cases of secondary syphilis, in deptraved conditions of the system, where dropsy follows, the remedy is demanded. Goss claimed that it was especially curative where from blood dyscrasia, ulceration would readily follow contusions, or wounds would not heal readily. It has been used to correct difficult menstruation and restore the lochial discharge. In the form of an ointment, it is applied to glandular inflammations especially those of the mammary gland, and testicle, to bruises, ring worm, piles and chronic, painful swellings or enlargements. The agent should have more general use.