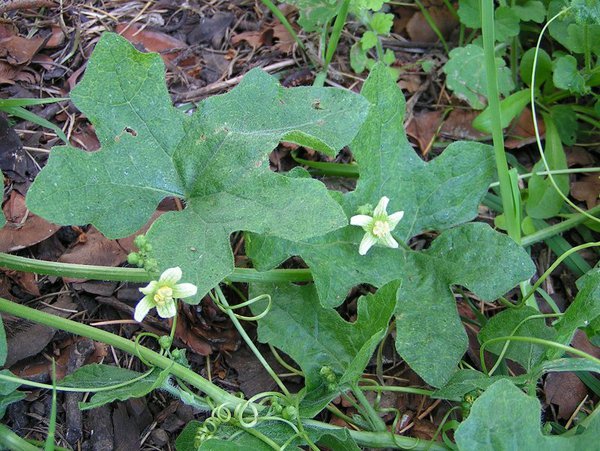 Bryony is a medicinal herb that has entirely gone out of fashion. It was used in the last century to treat a variety of respiratory problems, in very small doses. However, it has not been used in a long time. Here are some quotes from the textbooks of the Eclectic Physicians, a group of American doctors who did in fact use Bryony.

Notes From the Eclectic Physicians

I have experimented with the Bryonia for some ten years, but without satisfactory results until lately. During the past winter I have treated some cases in which the remedy was a true specific. The most marked symptom indicating its use, that I have noticed, is a dusky flushing of the cheeks, expecially over the right malar. Pain in the right side of the face and head, burning in eyes and nose, with acrid nasal discharge. The pulse is full and hard, urine scanty, and bowels constipated. With the first symptom named I should prescribe it in any form of disease, thought it is used most frequently in rheumatism, pneumonia and catarrhal affections.

1898; Webster; (Articulations) – Byronia
The influence of this remedy is not a strongly pronounced one, hardly equalling that of jaborandi in the class of cases to which it is at all adapted, viz., acute inflammatory affections of the synovial membranes. Among the homeopaths it has enjoyed considerable reputation in articular rheumatism – more, probably, than it deserves. Its action is not very prompt, and I seldom employ it, for the reason that there are better remedies for the purpose.

1898: Webster (Digestive System)
Bryonia, in minute doses, is occasionally a very positive remedy to costiveness in infants nourished on cow’s milk or other constipating diet. I have cured such cases with this remedy, but have oftener failed. It is not very reliable.

Bryonia is sometimes useful in the treatment of dyspepsia, gastralgia being the indication for it. The pain comes on whether the stomach is empty or full, and seems to depend upon a predisposition of the muscular walls of the stomach to ache, rather than upon gastronomic abuses. It here classes with cimicifuga, which proves an excellent remedy for gastralgia when the muscular walls of the stomach are the seat of rheumatoid pains.

Hepatic affections are often relieved by bryonia. It is indicated when there is slight jaundice with stitching pains in the region of the liver as though the serous envelope were inflamed. It has been termed a gastro-hepatic remedy-useful in digestive and hepatic disturbances when the reciprocal relations of these functions are disarranged.

Dose- Add ten drops to four ounces of water and give a teaspoonful every one or two hours.

1898; Webster; (Muscles) – Bryonia Alba
Bryonia is adapted to painful conditions of the thoracic muscles. It has been highly extolled by homeopathic writers as a remedy for rheumatism generally, but its best place is in the treatment of thoracic pain accompanying bronchitis or pneumonia. In chronic pleurodynia it is of little use.

I have found this agent of service in the treatment of infants suffering from thoracic pain, as evidenced by granting expiration and catching inspiration, the little patient evidently suffering then. Such cases sometimes prove very troublesome until bryonia is brought into requisition.