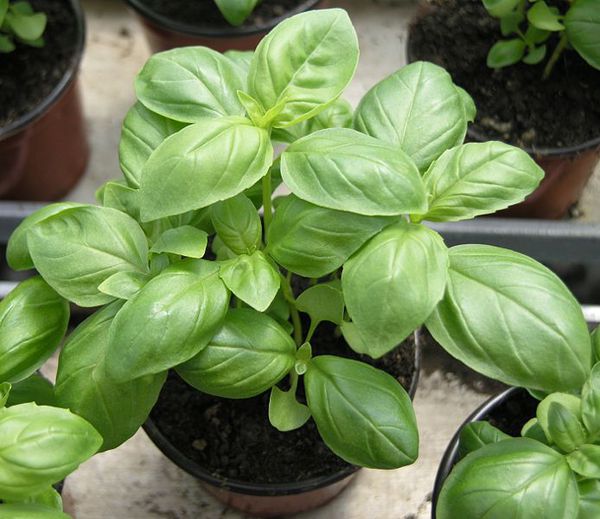 Basil is an herb that the most herb ignorant knows…they sell it at the grocery store and you could not miss this one if you tried. Its an old herb and one that comes packing a great story. Primarily a culinary herb, it does have its medicinal uses, and some magical ones too.

“Madonna , wherefore hast thou sent me
Sweet basil and mignonette?
Embleming love and health, which never yet
In the same wreath might be.
Alas, and they are wet!
Is it with thy kisses or thy tears?
For never rain or dew
Such fragrance drew
From from plant or flower…”
Shelley

It would seem old Shelly had fallen in love with some woman that made her life a convent dweller.

This little love folly occured while he was living in italy . In the language of plants basil symbolized love, and sending someone some basil was a hint of interest. Mignonette was code for “your qualities surpass your charm”. I deduce from the poem this nun had sent this message to shelly in plant code. Talk about a mixed message, a nun sending a love message and retreating back to the convent. Shelly definelty got jerked around in this deal.

Sweet basil , risen to much fame in america in the form of pesto has a very interesting myth attached to it dating from its early european days. In european mythology existed an insect called a basilisk. A scorption like animal reported to kill humans with a single glance. I dont think was ever spotted, but people knew of the animal and were afraid of it. What does this have to do with basil? Well, it was widely held at the time of the basilisk that basil attracted the scorpion. Apparently the insect is a draw for the loathesome bug and people observed that a pot of basil would always hide a scorpion. Grieve in er herbal goes on to say that people even felt that a sprig of basil left under a pot would turn into a scorpion. She goes onto to say that people feared smelling basil could create one in the brain. Well, being that scorpions take a liking to basil, and the basilisk was scorpion like, the plant was called basil. Another theory is that basil got its name from basileus, or king, as basil was the king of herbs. In either case, that delictable sweet herb is called basil.

Just today , late febuary, i was longing for some fresh basil. Grwoing basil and having an unlimited supply is a rare treasure. Basil is a annual and has to be planted each spring after the last frost. Basil has no humor about frost and will up and die immediatly if any touches its flesh. Every year i plant half a dozen diminutive basil starts , and reap bundles and bundles of basil for six monthes. If you have no experience with fresh basil, you have no experience with basil. You simply must attempt to grow some, whether on the window sill or in the garden. It is one of the richest taste experinces and mouth experinces a person can have. My esteemed mother in law taught me a trick on how to keep fresh basil in the house year round and I’d like to share it with you. A fine woman of italian descent she manages to keep basil going all summer long in her city residence. As it only lives 6 montes out of the year, and produces abundantly in that time period, she has devised a way to make it stretch the year. She pulls the leaves off the plant and fills the compartments of an ice cub tray with the plucked leaves. Each square being complety stuffed she fills the tray with water, and freezes it. The process being repeated over the season leads to a big bag of basil cubs. The cubes are just popped into what ever dish calls for a little basil. This perfectly maintains the fresh basil taste. And nothing is more refreshing than basil in january.

A native of india , basil has several ties in that country. The lant is sacred to vishna and krishna , the big gods. Its a favorite in indian households and as with most cherished plant, the orignal and continued usage is intensely practicval. Basil lessens the effects of many of the tropical fevers that plague india . Its used to treat fever, headache, and nausea in india and in africa . As to whether basil first became a celebrated herb for medicinal or culianry purposes is hard to determine, but cherished it is.hindu’s are put on the funeral pyre with a sprig of basil on the chest. Basil is thought to be the express ticket to paradise . If you suffer from headaches associated with a flu bug, give basil tea a try.

It would seem as well that there was a time in india when dead members of hte family were bureid under the house, and basil was grown at the window in tribute of the dead. I think as well they may have grown the basil to mask the odor of the dead person under the floor boards.

Bush basil, appearing in this country as asian basil is a small leafed version of the the big leafed basil. Its a native of maylaysia and taste quite the same as big basil. If you eat thai food you’ll notice the basil used on basil chicken usually has little leaves and the usual big basil taste, i grow big leafed basil as it bigge and thus produces more basil. You may want t give it a try. In its native country women plant it on the graves of their depatred loved ones.

The greeks felt basil symbolized hate and misfortune. It was considered a lowly plant and symbolic of povety and bad luck . Gireve says in her herbal ” they painted poverty as a ragged woman with a basil at her side. ” basil certainly doesnt symbolize poverty today. The cost of fresh basil is quite prohibitive.

” the later writers , among whom simeon zithy is one, doe teach, that the smell of basill is good for the heast and for the head. That the seede cureth the infirmities of the heast, taketh away for-rowfulness which commeth of melancholy, and maketh a man merry and glad. So according to gerard, eating basil will take you out of the dumps and put you in cheerier spirits.

If you have any doubt as to whether basil can be grown in pots, take a look at this,” basill is sowne in gardens , and in earthen pots . It commeth up quickly, and looseth little moisture except in the middle of the day; gerard writes about growing basil in pots in the 1600′s, a definite sign to you that you can grow basil in pots today. In fact in the northern countries, england , germany ,and austria , the habit in the old days was to grow you basil in pots on the window sill.