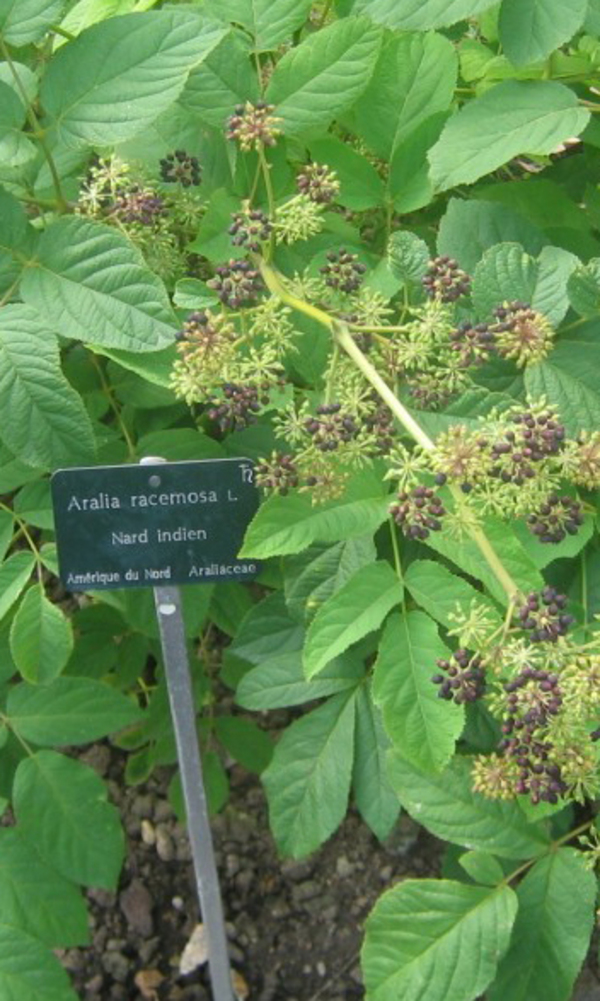 1778: Carver:
Spikenard culgarly called in the colonies petty morrel, the plant appears to be exactly the same as the asiatic soikenard , so much valeued by the ancients. Its berries are of such a balsamic nature, that when infused with spirits, they make a most platale and reviving cordial.

1785: Cutler
It is aromatic. The berries give to spirits an agreeable flavor. the bark of the root and gthe berries are a good stomachic. It is said to have been much used by the indians for medical purposes.

1855: Trail
The root boiled with milk to cure dyssentery in children.

1858-61 Gunn
The root is considered an excelleant substitute for sarsaparilla as an alterative in all constituional diseases , and as an important remedy in comsumption, breast complaint, and all female complaints. May be used in decoction, sirup or bitters. cough mixture. This medicine has a wide reputation and must possess greeat merit from the success which attends it. Mix one ounce spikenard with two teaspoons of salt petre in one quart of the best whiskey. Dose half a wineglassful , more or less, as neccessary , three times a day.

1883: Scudder: (alterative)
Therapeutic Action – The Aralia racemosa is alterative, tonic, disphoretic, stimulant, pectoral, and demulcent. The medical properties and uses of this agent are quite similar to those of the preceding species. As an alterative it is less frequently used than the Nudicaulis, although often used in domestic practice in the same diseases to fulfill the same indications. It is, however, more frequently employed in chronic palmonic affections, as in phthisis, chronic catarrhal affections, coughs and colds.

1892:Millspaugh
In domestic practice it has been made into a cpmposite sytyp with inula heneium (elecampane) and used as a remedy in chronic coughs. asthma, and rheumatism: a ticute of the root and fruit has also been used as a stomachic.

1909: Felter and Lloyd: ARALIA RACEMOSA – SPIKENARD
History – This plant grows from Canada to Georgia, and westward throughout the United States. It flowers in July, and is found in rich woodlands, and rocky situations, often growing in the crevices of rocky declivities.

Action, Medical Uses, and Dosage – The root of Aralia racemosa possesses properties similar to that of the A. nudicaulis; it was formerly much used in pulmonary affections, and enters into the compound syrup of spikenard. Dose: specific aralia racemosa, 5 to 30 drops in water, 4 times a day; infusion (3ss to aqua Oj), 1/2 to 2 fluid ounces.

Specific Indications and Uses – Atonic states, with cough and irritation of the broncho-pulmonary tract; catarrhal affections.

Aralia racemose is alterative, diaphoretic, and gently stimulant. 1915: Harris: Huron indians: children with whooping cough and people with asthma and pains in the breast.

1918: Joseph Meyer
Herbalist: spikenard is a mild stimulant , alterative, and expectorant. While it is employed to some extent as a pectoral , its value is uncertain. 1 or two teaspoons to a cup of boiling water, drink one ot two cupfuls a day. Tincutre, 1-2 fluid dr. Coutnry uses of medicinal plants: infected sores and blood poisoning. used to give a sick person a boost back to health.

1926-27: Densmore
Used when stoppage of periods was threatening to turn into consumption.

1923: Menomini
the root of this psrecies is used in case of blood poosoning and as a poultice for sores. A drink os also msaid to be made from te root which is said to be good for stomache ache.

1928: Smith: Meskwaki
The root chewed and spit onto the head of a mother in labor. used as a seasoner for other medicines.

1932: Smith: Ojibwe
They use it as a special sqaw remedy for blood purification during pregnancy. TH eoort was pounded in a mortar, then boiled in hot water.. prepared the same way and the tea was used to cure cough.

1955: Mockle
This species is used as a carminative, cough medicine and antiseptic in colds. The roots are used to flacor little beers. Holden found in it a saponiside which he called aralioside.