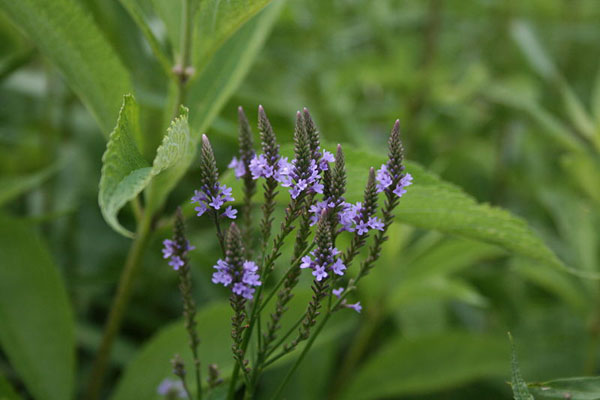 The verbena family is widely used in medicine, around the world. This is an American member which was used by the Native Americans and adopted by the Colonial physicians. It was lightly used by the Eclectics to increase the bodies production of secretions, like sweat, urine, and in large doses, to induce vomiting and evacuation of the bowels. This one needs a little more investigation before it gets any practical use.

1883; Scudder
Root of the verbena hastata ‑ U.S. Preparations: For an emetic, a decoction of 3ij. to water Oj., has been employed, giving one‑fourth the quantity every fifteen minutes. For other uses a tincture is preferable. Dose: The dose of the tincture will vary from the fraction of a drop to half a drachm.

Therapeutic Action: Verbena is emetic, diaphoretic, expectorant and tonic. As an emetic, it may be used in the form of a strong decoction, in doses of one ounce every ten minutes, until it vomits effectually. It forms a very efficient emetic, and may be prescribed with advantage in “sick‑headache,” arising from indigestion, or debility of the stomach, in fevers, and whenever a mild emetic is indicated. It may also be used, with a prospect of success during the forming stage of fevers, but particularly in intermittents a short time before the paroxysm; in this case it should be given to the extent of producing full vomiting and perspiration.

If administered in small and frequent doses, in the form of a cold infusion during the intermission, it acts as a tonic and antiperiodic and not unfrequently effects a permanent cure. As a diaphoretic and expectorant, it is very beneficial in colds, coughs, and diseases of the respiratory organs. It is even said by some, though the authority is questioned, to have cured many cases of consumption.

Scrofula is another disease in which it is said to have proved highly useful; it is also prescribed in obstructions of the glandular system, arising from cold. It is also highly recommended in amenorrhoea and obstructed or suppressed lochia. In the former complaint, the tincture, decoction, or extract may be used. The extract when combined with the sulphate of iron and gum myrrh constitutes a very good emmenagogue pill. The extract and sugar have been melted together, and used as a lozenge in the same cases. We have found a warm infusion a very superior agent in suppressed lochia.

Some recommend it as anthelmintic, and others speak favorable of it in calculous and nephritic affections. The cold infusion, in small doses, promotes the appetite and favors digestion. Dose: As an emetic, the dose of a decoction of 3ij. to Oj. of water, if from 3iv. to 3vj. every ten minutes. As a tonic the cold decoction may be given in doses of 3j., and repeated as often as may be desired. As a diaphoretic, the warm infusion may be given in doses of 3iv., every hours.

The Verbena urticifolia, the white or nettle‑leaved vervain, is sometimes employed, but is a very inferior substitute for the preceding species. Schoepf states that it has been used in poisoning from the Rhus toxicodendron; boil it in milk and water with the inner bark of the white oak and apply.

1911; Fyfe
Epilepsy, obstructed menstruation, acute catarrhal conditions. It is said that this agent has cured cases of epilepsy which had been unsuccessfully treated for a long time by many other methods. These reports deserve attention, for it is possible that the remedy may reach a class of cases in which the physician now has but little success. Verbena hastata is tonic, sudorific, expectorant, and emetic.