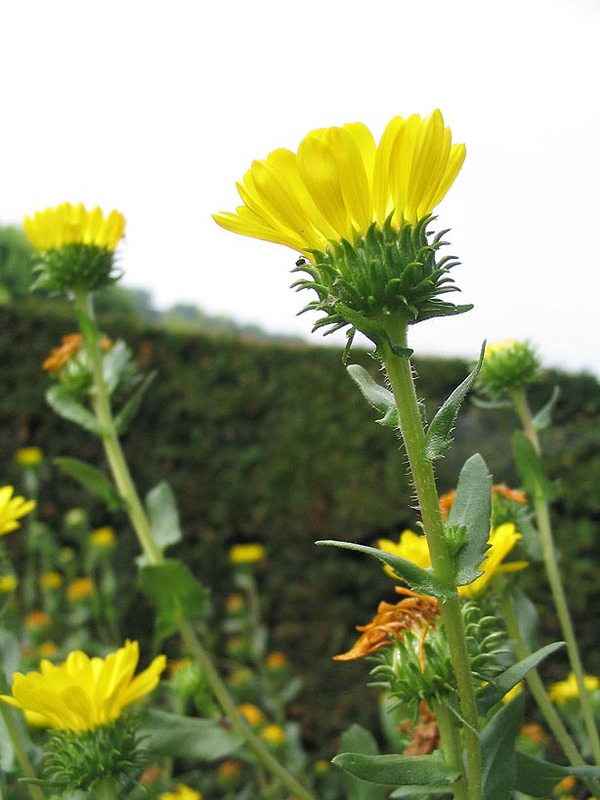 Dose – From the fraction of a drop to five drops.

Therapeutic Action -Grindelia is a stimulant to the cultritive processes, both in its general and local action. We have prescribed it with marked advantage in atonic ulcers and sore legs, in scrofulous ulceration, and in some cases after sub-acute inflammation with cacoplastic deposit. In these cases the local application will be of the strength of 3ij. to water Oj.: internally, one or two drops every three or four hours.

It has proven a fairly good remedy, in humid asthma, and in the asthma of corpulent and lymphatic people. In some cases it gives prompt relief, and occasionally effects a cure.

1898: Felter and Lloyd: GRINDELIA (U.S.P.) – GRINDELIA
Action, Medical Uses, and Dosage – The grindelias leave in the mouth a bitter, acrid sensation, which persists for some time and is accompanied or followed by an increased flow of saliva. On account of their irritant effects upon the kidneys, they act as diuretics. The brain and cord are first stimulated by them, followed by motor impairment of the lower extremities and a desire to sleep. The number of respirations are reduced by them.

Grindelia robusta has been found especially efficient in asthma, giving prompt relief, and effecting cures in cases previously rebellious to medication. Occasionally, however, as is, indeed, the case with all the therapeutical agents, it has failed, but the circumstances attending these failures have not yet been determined. Further investigations regarding its action in this disease, and the cause of its occasional failure are required. It has likewise been found efficient in bronchial affections, in pertussis, and in some renal maladies. Prof. Scudder was partial to this remedy as a local application in chronic diseases of the skin with feeble circulation, particularly old chronic and indolent ulcers. Specific grindelia robusta (3i to 3ii to water Oj), was employed with marked benefit. The fluid extract and specific grindelia robusta are the preparations generally employed, the former in doses of from 10 to 60 minims, and the latter in doses of 5 to 40 minims, repeated 3 or 4 times a day, as may be required. Children require doses of from 5 to 15 or 20 minims (fluid extract), and 1 to 10 minims (specific grindelia robusta).

Grindelia squarrosa has been highly eulogized as an efficient remedy in intermittent fever, and in other malarial affections, also to remove the splenic enlargement which so frequently follows those disorders. Why two plants so closely allied as the G. robusta and the G. squarrosa, and possessing nearly identical constituents, should give such discordant therapeutical results, is certainly enigmatical. The fact is, that many physicians have a great proneness to run after new remedies, especially when introduced under some pretentious name, and to place a marvelous credulity in the statements of interested parties, who are incapable of determining accurate conclusions as to the value of a remedy. Webster, however, asserts that the remedy has a special action upon the splenic circulation, an dpoints out as the case for it one of splenic congestion associated with sluggish hepatic action and dyspepsia. Dull pain in the left hypochondrium, sallow skin, debility, and indigestion are the symptoms pointing to its selection (Dynam. Therap.). The same author recommends it in chronic dyspepsia due to prolonged malarial influence, gastric pain when the spleen is seemingly involved, and in the splenic congestion of malarial cachexia. As a local application, the fluid extract is stated to be of value in the painful eczematous inflammation and vesicular eruption resulting from contact with the poison vine or the poison oak. The dose of the fluid extract is from 15 minims to 1 fluid drachm, repeated every 3 or 4 hours; of specific grindelia squarrosa, 5 to 40 drops.

1898: Webster: (ductless glands)
This remedy has proven curative in chronic affections of the spleen of stubborn character, and should not be omitted from this list. In chronic dyspepsia depending on long standing malarial disease, and in painful states of the stomach where the spleen seems to be involved, it should be recollected as an agent liable to effect speedy relief. It not only releives the pain and fullness in the splenic region attending, but seems to act as an invigorator of the system, improving the power of the vegetative processes, thus augmenting digestion and assimilation.

It possesses antimalarial virtues, and is therefore especially valuable in splenic congestion occuring in malarial cachexy.

Form of administration: The specific medicine.

Dose: from five to twenty drops.

Grindelia robusta is a remedy for asthmatic breathing, with pectoral soreness and a sense of rawness . The accompanying cough is dry and harsh and the breathing labored, causing in plethoric persons a dusky coloration of the face. Locally it is valued in old ulcers of an indolent nature.

Use as a wash. The dose of specific grindela robusta is from 1 to 60 drops.

Grindelia squarossa has been used successfully in malarial disorders and to relieve consequent splenic congestion and hypertrophy. The indications for it are, dull pain with fullness over the spleen, sallow skin, debility, and indigestions, with pain. Both grindelias are successful in allaying the unpleasantness arising from rhus poisoning, and in painful eczematous inflammations and vesicular eruptions. The dose of specific grindelia squarossa is from 1 to 60 drops every three or four hours.

1911: LLOYD
Grindelia, robusta, a Californian plant, is, as found in commerce, of questionable authenticity, owing to the near relationship of very similar species of grindelia. It early attracted the attention of the Jesuit Fathers in their mission stations along the coast, it being used by the natives before the conquest of the country by the Americans. Dr. C.A. Canfield, of Monterey , Cal. , about 1863, called attention to grindelia as a remedy in the poison of rhus toxicodendron, its native use in that direction having become known to him. Mr. James G. Steele, of San Francisco , 1875, contributed a paper to the American Pharmaceutical Association commending its use in this direction. After that time the drug rapidly crept into favor with the profession of medicine.

1919: Ellingwood – GRINDELIA SQUARROSA
Grindelia squarrosa is closely allied tot he grindelia robusta, but is in general a less leafy and bushy plant, and is smaller. Some authors are not satisfied that there is sufficient difference between them to make them distinct plants. In the West they are not recognized as the same.

Therapy – Dr. Webster is authority for the statement that grindelia squarrosa is specific in its anti-malarial properties. He is very positive concerning its influence upon headaches, and especially those of malarial origin. Headache present where there are masked intermittent symptoms, headache accompanied with dizziness, and some nausea, where the subject walks with the sensation that he is going to stagger. It seems as though his equilibrium were uncertain, or where there is mild staggering and irregular gait, where the head feels light and dizzy all the time. In this form, grindelia squarrosa is a positive and specific remedy, decided and satisfactory in its action.

Another form of headache which this agent will cure is one that seems to follow, and depend upon slow autointoxication. It is persistent, day after day, and there is dullness, drowsiness, and dizziness. There is apt to be torpor of the liver and spleen in these cases. There is lassitude, and the patient tires easily. A dull headache is present when he awakes in the morning, and with some exacerabations continues all day. This form is quickly cured with this remedy. A tincture made by covering the fresh plant with ninety-eight per cent alcohol is required to relieve this headache. Give from ten to fifteen drops of this tincture every two or three hours.

As a remedy for chronic enlargement of the spleen, and for the symptoms present in that condition, Webster claims that the agent is superior to polymnia. Where there are persistent attacks of malaria, and where the system needs a permanent tonic, this agent is of great importance. It promotes the appetite, increases the functional activity of both the liver and spleen, in a normal and very satisfactory manner, and in longstanding cases, the periodicity of all the symptoms, whether of the fever or chill, is overcome by this remedy in a manner superior either to quinine or arsenic. The remedy is best obtained from low, swampy, marshy ground. That which is found in Colusa County , Cal. , where Dr. Bundy collected his specimens, is found to be the best.