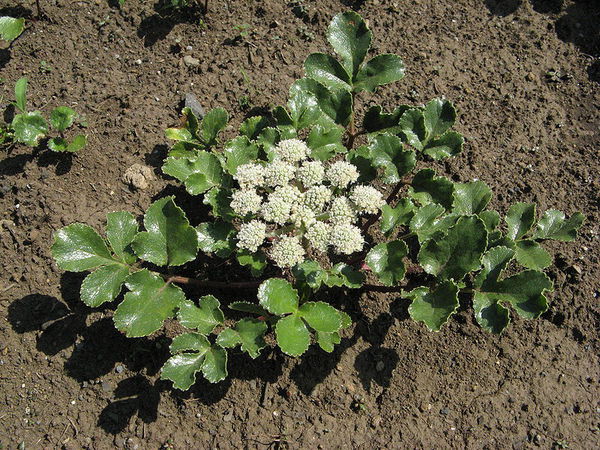 History and Traditional Uses of Hamaboufuu
Hamaboufuu is native to Japan and can be found growing wild in the dunes off the coastline of the Japanese islands. It is a perennial herb which sends long roots deep into the sand as a means of anchoring itself against the strong winds and tides raging from the treacherous islands seas. It spreads with runners which creep across the sand. It bears small white flowers in May and July.

Hamaboufuu’s tender young leaves are an indispensable vegetable in sophisticated Japanese cuisine. It is used to garnish Sashimi, sliced raw fish and other traditional dishes.

Medicinally speaking, Hamaboufuu is an important plant in traditional folk medicine. Indeed, one ancient use is as an annual tonic. On the day of the Japanese New Year, Japanese people drink a medicinal alcoholic beverage called Toso. The drink contains several medicinal herbs of which Hamaboufuu is one. Drinking it on the New Year’s day is said to insure health in the coming year.

In Japanese medicine, the part used is the root, harvested in midsummer and dried in the shade. Hamaboufuu is used to improve circulation, warm the body, and to remedy osteo-arthritis, rheumatoid arthritis, stiff shoulders and headache. More than just a folk remedy, it is registered in the Japanese Herbal Medicines Codex!

At one time, Hamaboufuu was used as a substitute for Boufuu (Ledebouriella seseloedes Woll), by Chinese medicine practitioners working in Japan. Medicinally speaking, the two are used interchangeably. Boufuu is mentioned in the oldest Chinese herbal called ‘Shinnouhonzoukyou’ published approximately 1400 years ago. Much like its Japanese cousin, it is seen as a specific remedy for headaches and arthritic pain.

Research has shown that many of this plants traditional uses are warranted. The coumarines contained in it have been shown to have anti-inflammatory action in vitro and an alcoholic extract was shown to have an analgesic action in rabbits when given orally. Hamaboufuu reduces inflammation and the pain associated with it.

Practitioners’ Opinion
When pain strikes, Hamaboufuu is an excellent choice. It is especially effective in treating joint pain and muscle pain, both of acute injuries and in chronic conditions like rheumatoid or osteo-arthritis. It can be topically applied and taken internally.