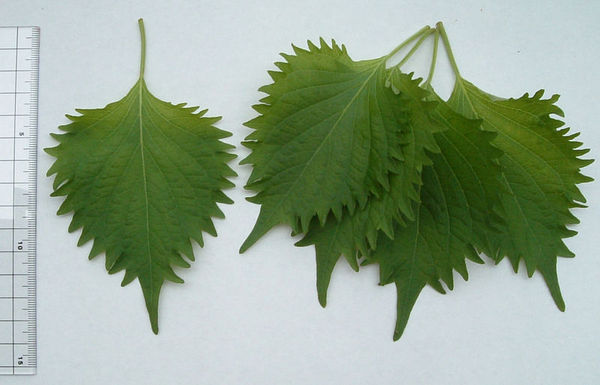 Shiso is an annual member of the mint and a really cool one at that. It emits a strong cinammon scent….its loaded with aromatic oils that make it one active herbal remedy or food. Its both. Its strength is helping people survive food poisoning…and that makes it one to know about in the age of questionable food.

History and Traditional Uses of Shiso
Shiso is an annual member of the mint family. Native to China, it was brought to Japan in 8 th century AD. Originally, it was cultivated for its seeds, which were pressed for lamp oil. In time, cheaper sources of oil were found and cultivation of the plant for this purpose ended. However, the leaves are rich in aromatic oils and carry a cinnamon like scent. Its aromatic leaves resulted in its continued cultivation, this time as a source of food and medicine.

Shiso is a handsome, stout herb with gorgeous ovate leaves and spike like flowers. Some varieties are purple red, some green, and some a combination of the two. The leaves can be smooth or wrinkled. Its
cinnamon scent makes it a popular aromatic vegetable in Japan. Some buy the spicy leaves from the herb seller, but, because it is easy to grow, many gardeners plant a row for domestic consumption.

Indeed, it is an essential ingredient in traditional Japanese cuisine. For instance, the Japanese pickle plums with the fresh red Shiso leaves. These spicy red leaves give the plums a characteristic colour and flavour. The fresh leaves and young seed pods are widely used in tempura, salads, and miso soup. People use the fresh leaves as a side dish with raw fish. This use is intensely practical; the raw leaves are powerfully antiseptic and prevent food poisoning. Eating raw fish can be risky business!

Though Perilla has factored into cuisine for centuries, it has also been used to maintain health. Today manufactures produce a long list of Shiso confections, juices, powders, extracts, and juices to be used in health care regimens.

In Japanese Folk Medicine, Shiso is used to treat the common cold, rheumatoid arthritis and food poisoning. The common denominator? Inflammation. Its primary use is in inflammatory conditions, such as hay fever, allergies, arthritis and inflammatory skin diseases. Japanese people see it as being a powerful anti-inflammatory herb.

Anti-inflammatory Agent
Recently, researchers have discovered that Shiso does indeed have an anti-allergic action. In fact, some doctors treat atopic dermatitis and hay fever with the fluid extract of Shiso and report remarkable results. Extensive animal research has been conducted to see if there is anything to this use. Contemporary research shows that Shiso inhibits the inflammation caused by the allergic response. In an animal study, inflammation was reduced by 68% when the extract was administered. In the same study, steroids, popular prescription drugs, inhibited inflammation by 99%. This shows just how effective this simple plant is at combating inflammation. Plus, it lacks the dangerous side effects of chemical steroids.

Respiratory Tract Inflammation
A decoction of Shiso and ginger root was given to 552 patients with chronic bronchitis, another chronic inflammatory condition. After two months of treatment, there was good control in 11.2%, great improvement in 27.2%, slight improvement in 36.8%, and no change in 23%. The only side effect observed was dryness of mouth, which was rare and transient.

Practitioner’s Opinion
Shiso has been long used to treat chronic inflammatory conditions like eczema, asthma, hay fever, and rheumatoid arthritis and contemporary scientific research validates this use. Whereas some have concerns about treating these conditions with steroids, Shiso is a safe and effective means of combating inflammation without the side effects associated with steroid use.