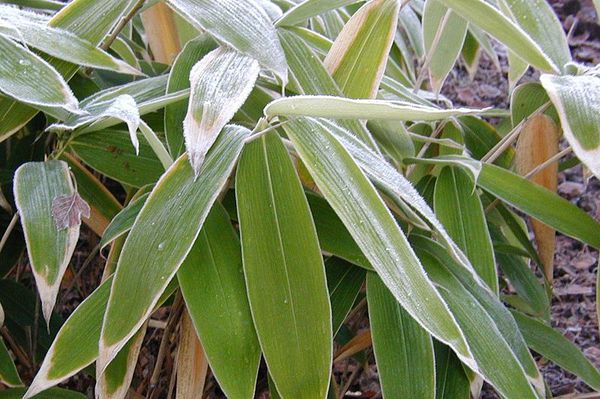 Kumazasa is native to Japan and grows wild in the northern regions. The plant is used to fight infections, both internal and external, and is popular in Japan in both cases.

History and Traditional Uses
Kumazasa is native to Japan and grows wild in the northern mountains. Indeed, the Sasa genus of plants is indigenous to Japan. Although these plants belong to the grass family, this genus is very different to other grasses. Firstly, they spread by rhizomes and not by seed. They bloom and bear fruits only once in their lifetime and then die. When the bloom occurs, it occurs across a vast area, and it occurs infrequently. Some say it occurs every sixty years, others say only once in one hundred years. This much is certain, the blooming of Kumazasa is a very rare occasion! In the old days, farmers regarded the blooming of Kumazasa as being very ominous, forewarning of a bad crop.

Gardeners in Japan have a love/hate relationship with Kumazasa. Its popular amongst gardeners as the plant has handsome ovate leaves with fringe that becomes white in the winter. This whitening of the leaf is characteristic of the species. Indeed, its name may come from this habit. In Japanese kuma means fringe. However, despite its ornamental features, its vigorous growth habit makes it hard to keep under control and even harder to remove if one grows tired of it. The good always comes with the bad.

Kuma also means bear in Japanese. Another legend holds that the plant is called Kuma because bears like to eat its leaves when they first awake from hibernation. Either way, Kumazasa is a well loved plant in Japan!

Members of Sasa genus are well used in Japanese cuisine. Before the age of plastic, people used Sasa leaves to wrap foods. They found that more than being just a protective wrapping, the leaves actually preserved the food. The leaves contain volatile oils which give a nice fragrance to food parcels and also protected them from spoilage. Kumazasa leaves are also used in the preparation of Sushi, raw fish, for reasons to obvious to mention! The keep the raw fish from spoiling. Beyond volatile oils, the leaves also contain high quantities of vitamin K which has powerful disinfectant activity.

Not just used in food preparation, the leaves are used in medicine. Traditionally, they are seen as being stomachic, styptic, antiseptic, and expectorant. They are used to treat heartburn, food poisoning, ringworm, boils, cough, fever, gastric and duodenal ulcer, swelling, inflammation, oral putrescence, and halitosis.

Kumazasa leaves are rich in chlorophyll, polysaccharides, vitamins, minerals, essential amino acids, and lignin. Among these constituents, chlorophyll is thought to be a key player in its activity. Oddly, chlorophyll is almost the same shape as human hemoglobin.

Research reveals this extract stimulates bone marrow to produce blood and activates the existing immune cells responsible for collecting toxins in the body and removing them. In circulation, the extract picks up waste products and toxins, and carries them to liver, where they are disposed more rapidly. It also activates kidney and liver cells to increase the rate at which they remove toxins from the circulation. All done and said, the extract is a cleansing agent that stimulates well being and vitality!

Practitioner Recommended Uses for Kumazasa
Today practitioners are recommending Kumazasa be taken internally and applied externally to prevent infection. In the world of antibiotic resistant strains of bacteria causing problematic wound infection, the leaves and leaf products can be used to keep wounds clean and to encourage rapid healing.