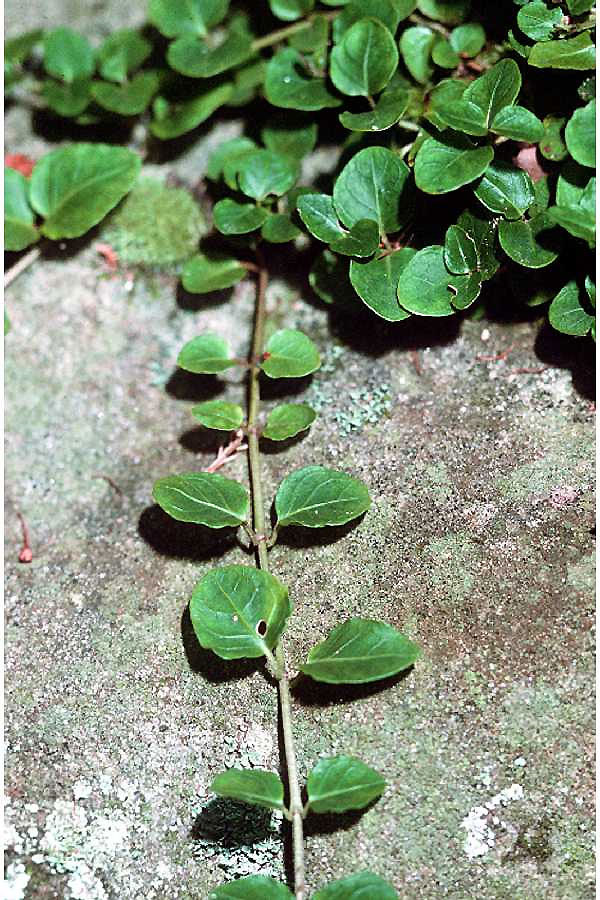 Partridgeberry was one of the most popular female health tonics in the colonial day. Whenever gynecological trouble struck, it was an option. One of the traditional herbs of the midwife, partridge berry comes with a great endorsement from the past.

1873: Scudder
The mitchella exerts a direct influence upon the reproductive aparatus of the female, giving tone and improving functional activity. It has been extensively used as a tuerine tonic, to promote menstruation, to remove false pains and unpleasant sensations in the later months of pregnancy, has has been thougth to be a good preparative to labor, rendering the birth of the child easier, and less liable to accidents.

Many have failed to obtain these influences from the use of the common preparation”compound syrup of partridgeberry’, because it was prepared from old materials. If made from the green plant, as named above, we think it will give satisfaction.

1898: Felter and Lloyd: MITCHELLA – PARTRIDGEBERRY
Action, Medical Uses, and Dosage – Partridgeberry is parturient, diuretic, and astringent. Used in dropsy, suppression of urine an ddiarrhoea, in decoction. It seems to have an especial affinity for the uterus, exerting a powerful tonic and alterative influence upon this organ, and has hence been found highly beneficial in many uterine derangements, as in amenorrhoea, some forms of dysmenorrhoea, menorrhagia, chronic congestion of the uterus, enfeebled uterine nervous system, etc. It is said that the squaws drink a decoction of this plant for several weeks previous to their confinement, for the purpose of rendering parturition safe and easy. Similar virtues have been ascribed to it by competent physicians of our time. The remedy is peculiarly American, not being noticed or used by foreign practitioners. Dose of a strong decoction, from 2 to 4 fluid ounces, 2 or 3 times a day. The berries are a popular remedy for diarrhoea and dysuria. Used as follows, partridgeberry is highly recommended as a cure for sore nipples: Take 2 ounces of the herb, fresh if possible, and make a strong decoction with a pint of water, then strain, and add as much good cream as there is liquid of the decoction. Boil the whole down to the consistence of a soft salve, and when cool, anoint the nipple with it every time the child is removed from the breast.

The plant yields its virtues to water and alcohol. It is indicated only in atonic conditions. It is an excellent uterine tonic. Amenorrhoea, dysmenorrhoea, and false labor pains are all relieved by it. It may be given with benefit for a month or two before parturition to facilitate labor, The dose of specific Mitchella is from one to tendrops. The infusion and the MOTHER’S CORDIAL (Compound Syrup of Partridgeberry), which contains it, may also be used for the above-mentioned troubles.

Use: In amenorrhoea and dysmenorrhoea it is of value. False labor pains are often relieved by it. Its main use however is to remove influences that increase severity of labor, and if given, starting in a few months before confinement, in 10 to 15 drop doses 2 to 3 times a day it will smooth the way to an easy labor by its tonic influence on the nervous system an duterus.

1911:
Atonic conditions of the female reproductive organs;tardy menstruation, uneasy sensations in the pelvis with dragging tenderness and pressure, frequent desire to urinate, and difficulty in evacuation.

This remedy has an afinity for the uterus and is beneficial in many uterine derangements. In amenorrhea, dysmenorrhea, menorrhagia, and chronic congestion of the uterus its curative power has long been recognized. It is also used in dropsy, suppression of the urine, and in diarhea with good effect. Mitchella repens is tonic, altertive, diuretic, parturient, and astringent.