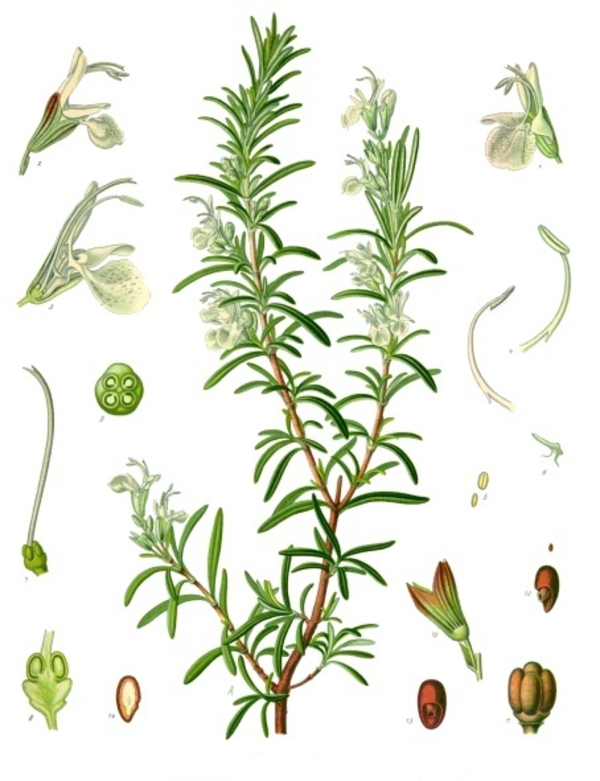 Rosemary is for rememberance. That is the old European saying and tells you what you need to know about it. If memory is an issue, Rosemary is an herb you may want think about adding to your health care routine.

“As for rosemarine, i lett it runne all over my garden walls, not onlie bacause my bees love it, but because it is the herb sacred to remeberance, and therefore, to friendship; whence a sprig of it hath a dumb language that maketh it the chosen emblem of out funeral wakes and in our buriall grounds”

This is a very old plant indeed, used for atleast 3000 years. Its first mention i can track down states that rosemary strengthens the memory. Along these lines its been used since ancient days at weddings and at funerals. Rosemary was carried to the grave as a symbol of never forgetting the departed.

” thy narrow pride, thy fancied green

All must be left when death appears,

In spite of wishes, groans , and tears,

Nor one of all they plants that grow,

But rosemary will with thee go”

Rosemary was used at weddings as reminder to the groom that he should never forget his bride and wedding vows.

” young men and maidens do ready stand, with sweet rosemary in their hand, a perfect token of your virgins life” old ballad, the

Wedding guest were each handed a sprig of the herb to symbolize the loyalty of a group of friends. I read the strangest account of a bride dying on her wedding day, and the bridal rosemary just became the burial rosemary.

In the past burnt offerings and incense facotored heavily into religeous ceremonies. In some catholic and serbian churches incense are still a part of the worship service. Sage, dried and on fire puts out an odour that would certainly wake a sleeping god. The old french name for sage was incensier, hinting of its common usage in ritual. Rosemary was also burned in sickrooms and this hints of another reason it was carried to funerals.

Today we choose to think that people in the olden days didnt have a grip on reality and that science has recently brought out of days of ignorance. The idea of disenfectant did not just jump out with lysols arrival on the super market shelf.

People may not have had microscopes but they definetly had the disease concept down. The ancients were quite aware of infectious disease and aware you had to protect yourself from somebody elses disease. When somebody died it meant that a disease had gotten the better of that individual, and it meant that disease could be circling the body for an unsuspecting passerby to pick up. In order to remedy the situation people burned rosemary at the sickroom and also at the funeral. They washed their hands in rosemary water and carried sprigs with them to smell. In effect they bathed them selves with a very strong disenfectant. They burned it in hospitals and also in jails to keep gaol-fever down . The ancients got a lot of what was going on, weve just refined what they already know.

Plants with some time in human captivity always have some great myth around them and rosemary is no exception. In the 1600′s it was commonly held that if the rosemary thrived in the garden, the wife of the house wore the pants. From the treasury of botany,

” there is a vulgar belief in gloucestershire and other counties, that rosemary will not grow well unless where the mistress is “master”; and so touchy are some of the lords of creation upon this point, that we have more than once had reason to suspect them of oricatly injuring oa growing rosemary in order to destroy this ecidence of their want of authority. ”

Imagine, men needing to appear in control to the point they would sabotage a stupid plant. This male / female control conflict is clearly nothing new.

The name rosemary comes from a most interesting source. Rosemary is a native of the mediteranean , growing specifically at the seas edge. In its wild state it picks a spot close enough to the sea to catch the salty sea breeze on its leaves. The latin name, ros marinus, loosely translated means the plant that loves the sea spray. Ros means dew and marinus means sea . Christianity has this nasty habit of making everything connect to its significant themes and symbols and with the advent of christianity people have come up with stories as to why the plant was named after the virgin mother. Some accounts state that the virgin slept in a clump of rosemary on her journey and thus the plant was called the rose of mary. In fact the plant was named ros marinus a long time before mary even walked the plant. But people will believe what they want to.

Now heres the part you’ve been waiting for, the greeks used to decorate their virgins with rosemary before sacrificing them at the altar. It would appear a sacrifice was just not right without the appropriate greenery. Apparently no self respecting virgin would show up to her own sacrifice without atleast a few sprigs of the stuff in her ensemble.

Rosemary should be included in your herbs garden because you can roast a chicken without it. There are of course other things to do with rosemary, but my favorite is to roast meat and potatoes. Nothing compares to walking into the kitchen wiht a roast in the oven cooking slowly with rosemary, thyme, oregano,and garlic, all picked fresh from your garden. The aromas put off and the taste of the dish is not the same with dried herbs. Rosemary is an essential herb for the kitchen . And its essential that you grow your own. Some herbs are very similar in the dried state and some are not. Rosemary different dried. I didnt like the herb until i started cooking with the fresh from my garden.

To get started you have the usual chioces, order plants or seed from a mailorder company, visit a garden center , or start some plants from cuttings available from the grocery store. See the section on starting plants from grocery cuttings to learn how to get started with these cheap and readily available cuttings.

Once you have your plants, you have the choice of growing it in a pot or out in the garden. If you want to grow it in a pot see the section on growing herbs in pots. In general you need to know a few things about rosemary to get it to floursh. Firstly remember where it is from, the mediteranean. This region is notoriously dry and thats how rosemary prefers to live, in a dry enviroment. Most gardens have a dry spot, an area that always seems to dry out faster than the rest of the garden. This is the spot for your rosemary. The mediteranean is also very moderate in temperature and as such prefers a protected location. Next to a wall is a perfect location for the rosemary plant. I have found that some of the more temperature sensitive plants from the mediteranean love to be next to concrete, and they seem much hardier and grow much larger in such a location. I dont know if its the chemicals that leach off the concrete or if the substance gathers heat in the winter and mellows the winter. The reasons being less important than the reality. A great location for your rosemary would be next to a concrete path or drive way. In spain ive seen rosemary reach 5 and 8 feet high, but in the states a short and spreading evergreen is more likely what you can expext.

As far as soil amendments go, rosemary likes a poor soil, so i wouldnt worry about adding anything. If your soil does not drain well dig some sand into your planting area. Plant the plant at the same soil level it occupoed in its pot.

One other thing you can do, but this is not neccesary. If you wrap your rosemary in winter with newspaper and put a garbage can on top, the plant will get to much larger proportions.