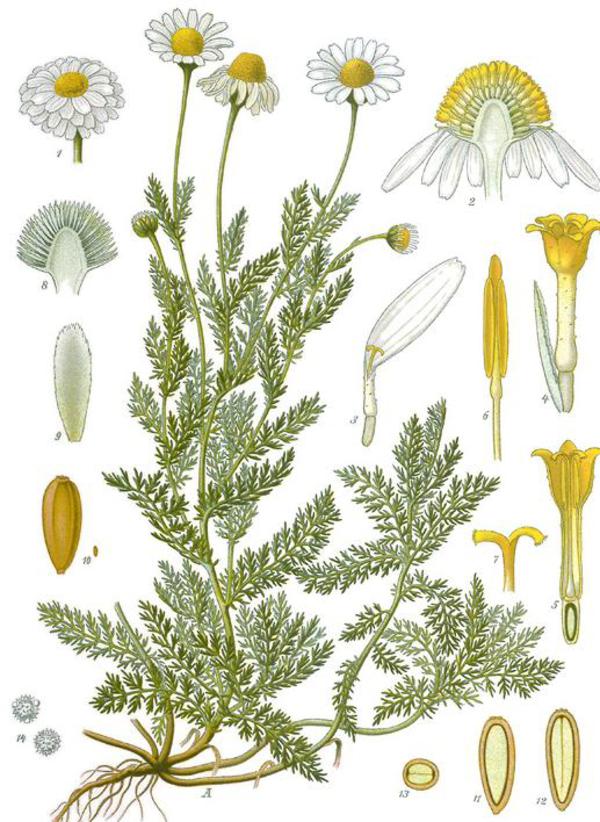 1854: JOHN KING – ANTHEMIS NOBILIS – CHAMOMILE, ROMAN CHAMOMILE
Properties and Uses – In small doses tonic, and in large, emetic. Used in cold infusion in dyspepsia, and in all cases of weak or irritable stomach; also in intermittent and typhus. A strong infusion warm, and taken freely, acts as an emetic. The oil is carminative and antispasmodic. Used in flatulency, colic, cramp in the stomach, hysteria, nervous diseases, and in painful dysmenorrhea. Dose of the oil, five to fifteen drops, on sugar; of extract, prepared in vacuo, which is the best form for internal administration, one to three grains. The flowers of the Matricaria Chamomilla, or German chamomile, possess similar properties to the anthemis, but are rarely used in this country, except by German practitioners.

1898: Webster
This is substantially the anthemis nobilis of some authors, though the use of the two names gives rise to confusion.
Chamomile influences the alimentary canal, but is a feeble remedy, and will hardly be of service except in the treatment of colicky infants. Here I usually prefer the 3x dilution of colocynth. However, chamomile sometimes does better, and is especially applicable to cases attended by diarrhoea, or where there is great irritability and restlessness.

1905: F.J.Peterson
Properties: Tonic, antispasmodic; in large doses emetic.
Use: Griping colic,pain in region of umbelikicus and lower, especially in children,stool green and slimy, smelling like rotten eggs. Reflex nervous irritation, In teething children it allays nervous irritation. Of benefit in reflex pain in the last months of pregnancy, reflex cough and muscular twitching and cramps. In amenorrhea with sense of weight and heaviness in uterus,bloating of the bowels, pain resembling labor pains, intermittent in character, it is of value.

1909: Felter and Lloyd – ANTHEMIS (U.S.P.) – ANTHEMIS
Action, Medical Uses, and Dosage – In doses of from 1/2 drachm to 2 drachms of the flowers, or from 1 to 3 fluid ounces of their infusion (3ss to aqua Oj), chamomile is a tonic; from 5 to 12 fluid ounces of a warm, strong infusion usually vomits. The cold infusion has proved useful in dyspepsia, weak digestion, and in all cases of weak or irritable stomach, as well as in onstinat gastro-intestinal irritation; also in intermittent and typhus. The oil is carminative and antispasmodic. Used in flatulency, colic, cramp in the stomach, hysteria, nervous diseases, and painful dysmenorrhoea. Colds, when due to sudden checking of the cutaneous secretions, are quickly relieved by anthemis, as are also recent cases of rheumatism and neuralgia, brought on in the same manner. In amenorrhoea from cold immerse the feet in mustard water, and after putting the woman to bed, give freely of the warm infusion. Dose of the oil, 5 to 15 drops on sugar; specific anthemis, 1 to 5 drops. The flowers of the Matricuria Chamomilla (see Matricuria) possess similar properties to the anthemis. A poultice of chamomile flowers is said to prevent gangrene and to remove it when present.

Dose – From five to twenty drops.

Therapeutic Action – Chamomile flowers are tonic, stomachic, corroborant, aromatic, diaphoretic, emetic, antispasmodic and carminative.
They possess valuable remedial virtues. As an aromatic tonic, stomachic and corroborant, we know of no single agent that is superior. They are valuable in enfeebled states of the digestive organs, occurring either as a primary disease, or dependent upon some acute affection. In many cases of indigestion, unattended with gastric inflammation, they are found to be very acceptable and curative.

1911: Lloyds
Anthemis nobilis has been cultivated for centuries in English gardens and used in domestic medicine from the beginning of the records. It was introduced into Germany from Spain about the sclose of the Middle Ages. It now is grown in favorable localities throughout every section of Europe and especially in Saxony as well as Belgium and France. The Roman chamomile was given the drug growing near Rome by Joachim Camerarius.(120) 1598.

1911: Fyfe
Diarrhea of children when the discharges are slimy or green, abdominal pains and colic in children,irritability and nervousness of children caused by teething, nervous state causing children to cry and start in the sleep.

In the treatment of children indications for chamomilla are frequently seen. In the colicky condition which frequently afflicts infants during the first few days of heir existence, ten drops of this remedy added to five teaspoonfuls of warm sweetened water constitutes an efficient prescription , and the medicine, if given freely, soon removes the little ones suffering.

Chamomilla is a tonic, antispasmodic, and carminative. In very large doses it causes vomiting.

1911: LLOYD.
Anthemis nobilis has been cultivated for centuries in English gardens and used in domestic medicine from the beginning of the records. It was introduced into Germany from Spain about the close of the Middle Ages. It is now grown in favourable localities throughout every section of Europe and especially in Saxony as well as Belgium and France. The name Roman Chamomile was given the drug growing near Rome, by Joachim Camerarius (120) 1598.

Administration -This agent seems to exercise but little influence in physiological doses. A few drops of the specific anthemis or the German tincture in a glass of water in teaspoonful doses every few minutes or every hour will accomplish good results when directly indicated.

Specific Symptomatology -Severe pain in infants, from simple causes, extreme susceptibility to pain, general hyperaesthesia, subjective, acute, transient, sharp pains.
The following indications were given in The Medical Century, and can be relied upon:

There is perpetual hyperesthesia; there is starting and jumping. The child is cross, wants to be carried, stool apt to be soft and charged with sulphuretted hydrogen; if there be diarrhea accompanying, the passages will look like the white of an egg mixed with greens. The gums are liable to be tender. Tooker says, “the remedy of all remedies and the one most often called for during the teething period is chamomile. This remedy is to children what pulsatilla is to women, a veritable vade mecum.”

Chamomile, acts mildly on the nervous system to subdue irritability and on the gastro-intestinal tract to relieve irritation there. It is adapted to the restless, peevish, irritable, discontented, and impatient infant who insists on being carried in arms constantly. With these there is usually hepatic tenderness with watery or greenish, slimy discharges, yellowish and white lumps of undigested curds, the fecal excordiating the external parts. There is often difficulty an dpain in urination, and bloating of the abdomen with flatulence. It prevents convulsions by relieving the irritation, but has not sufficient antispasmodic effect to control the convulsions. It is adapted to irritation of the nervous system, and not atony.

The many conditions with the adult woman it is beneficial, especially to those in the latter months of pregnancy where there are present false pains, nervous twitching, reflex cough, explosion of irascibility; where there is fretfulness, peevishness, impatience and discontent; where there is morbid sensitiveness to pain; where there are sudden fits of temper during menstruation with muscular twitchings.

Therapy -This agent in hot infusion is emetic, a stimulating diaphoretic, and it promotes the menstrual flow when suppressed from cold. It is of little importance, in the writer’s opinion, as we have so many other agents with wider and more positive action. In suppression of the secretions from acute cold it is a useful remedy. If drank during an alcohol sweat or Turkish bath, its influence is greatly increased. In acute rheumatism it will prove of service.

It is a mild stomachic and general tonic in half-ounce doses of the cold infusion, and it seems to mildly stimulate digestion.

In acute colic in infants, with nervous excitability and tendency to spasm, a few drops may be dropped into a half glass of water and a teaspoonful given every ten minutes with immediate relief. In flatulent colic and in colic accompanying diarrhoea, the discharges of a greenish, feculent character with reflex nervous irritation or increased nervous susceptibility, it is a specific remedy.

In constant worry and fretfulness of very young infants, without apparent cause, it is a soothing remedy of much value. It is excellent during the teething period to allay nervous irritation and soothe pain. In neuralgic pains in children it is useful.

In hysterical females its therapeutic influence is similar to that of pulsatilla. It soothes general irritation and quiets imaginary pains, especially if occurring at themenstrual epoch.

It is useful in dysmenorrhoea and in mild cases of ovarian neuralgia. In amenorrhoea with intermittent pains, and sensations of appearing menstrual flow, it is useful. It may be given for the erratic pains an dreflex nerve irritations of the last months of pregnancy, the reflex cough and unbearable muscular cramps and twitchings.

Anthemis nobilis has been cultivated for centuries in English gardens, and from the beginning of the records it has been used in domestic medicine. It was introduced into Germany from Spain about the close of the Middle Ages. It is now grown in favorable localities throughout every section of Europe, and especially in Saxony, as well as in Belgium and France. The name Roman Chamomile was given the drug growing near Rome, by Joachim Camerarius (120), 1598.