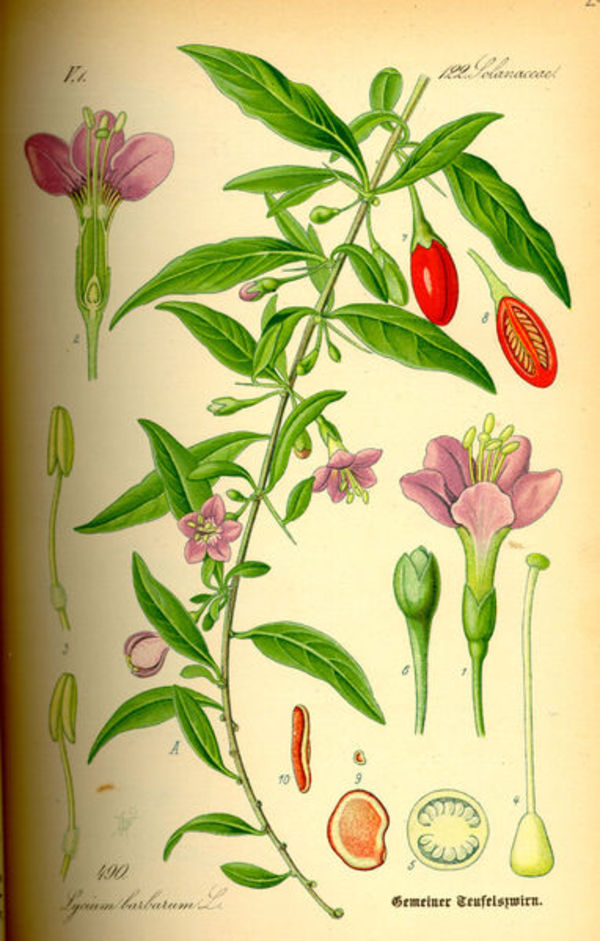 Chinese matrimony is a really old Chinese life force tonic. When the fire of life was burning out, due to age or disease, this tonic medicine was used to fire it back up. A classic from the Chinese stay well arsenal, this is a plant worth knowing about.

History and Traditional Uses of Kuko
Kuko is a deciduous shrub, native to Japan, Korea and China. It grows wild in wastelands and embankments and also finds its way into gardens. In summer, it bears pale purple flowers similar to those of a tomato or eggplant. These small flowers are followed by orange colored round fruits in autumn. The fruits and root bark are used medicinally while the leaves are used as vegetable.

Kuko is mentioned in the oldest Chinese herbal “Sinnouhonzougyou” (Divine Husbandman’s Classic of the Materia Medica) published 1800 years ago. In that text it is classified as superior tonic suitable for long term usage. The Chinese say it has the capacity to nourish “life force” and rejuvenate a person. According to this book, the fruits nourish the liver and kidney and make an excellent tonic in fatigue, lumbago, dullness, vertigo, anemia, and failing eyesight. The root bark is recommended to reduce fevers. In short, the ancient text suggests the drug as a powerful tonic for those failing to thrive.

Early in the eighth century Kuko appears in Japanese literature. By the early tenth century, it was an item presented to the Japanese royal court as a gift of great value. Highly prized by noblemen of the day as a vitality boosting tonic, Japanese peasants were encouraged to cultivate the plant. (This is probably why the plant can now be found growing wild in so many places in Japan.) From ancient times forward, legendary figures were reported to have lived to be over a hundred years of age and to be forever young as a result of daily Kuko use. The plant was seen as a panacea, able to heal whatever ailed you and to prevent you from ever ailing from anything!

Kuko fruits have long been seen as tonic medicine, gently and positively improving health and vitality. Substantial research now shows that the fruit positively impacts health on several levels. Researchers have shown it to be the general tonic the historic record holds it to be.

Research has shown that the plants most active constituent is amino-acid called betaine. Apart from betaine, Kuko contains almost all of the ten amino acids essential to healthy human life.

Kuko fruits have been proven to be hypotensive, hypoglycemic, and hypolipidemic in rabbits.

Kuko fruits have been found to protect liver from damage when exposed to toxic chemicals.

Kuko extract was shown to cause a sharp long standing reduction in the blood sugar level with an increase in carbohydrate tolerance.

A preparation of Kuko was shown to induce ovulation in adult female rabbits.

Kuko polysacharides were shown to have an immunity enhancing effect.

Kuko polysacharides were shown to be effective in protecting the liver against fatty degeneration.

The fruit is also rich in linoleic acid, a compound needed for the construction of cell walls. The compound also prevents fats from being deposited on blood vessel walls.

The fruit contains tannins which coat inflamed digestive mucous membranes, reducing inflammation and killing germs all at the same time.

Kuko contains Vitamin A, B 1, B 2, Iron, and chlorophyll which make Kuko a nature made vitamin tablet! Germanium, implicated in metabolism regulation and cancer prevention, is also found in Kuko.
Practitioner Recommended Uses of Kuko

The modern world is a tiresome affair noted for depleting people of vitality. The wears, tears, and cares of contemporary living take a toll on a person. Kuko can be used to give a person a boost of vitality just when they need it. Whether a person is suffering from chronic infections from being in a run down state or irritability due to nervous exhaustion, Kuko extract is an excellent choice.