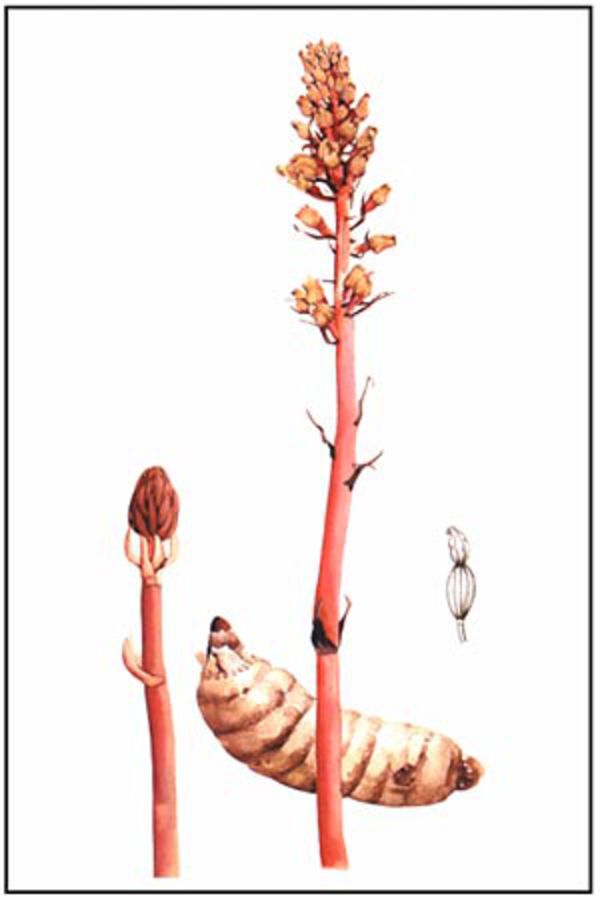 History and Traditional Uses of Oninoyagara
Oninoyagara is an orchid native to Japan, a perennial parasite found growing in shady thickets. It has a brown stalk, lacks leaves and grows as tall as 1 meter. In the winter the aerial parts die down, but its potato like rhizome survives. The plant is odd in that it does not contain chlorophyll. To sustain itself, it relies upon a fungus and a host to provide nutrients for its life processes.

Its Japanese name derives from the shape of the root and translates to “demon’s arrow”. To the ancient Japanese person its unattractive appearance conjured up demons! The rhizomes are harvested in July and dried in the sun. The plant grows both in Japan and in China. In both countries it is used as medicine.

Due to their high starch content, fresh tubers are used as food, both raw and steamed. Dried tubers are considered to be healthful, expelling toxins, giving strength and virility to the body, improving circulation, and strengthening the memory. It is prescribed for rheumatism, neuralgia, paralysis, lumbago, headaches, and other neurological and nervous conditions. It is said to increase coronary and cerebral blood flow and lower peripheral blood pressure. In Japanese folk medicine it is used specifically to treat headache and vertigo and a host of other nervous disorders, including apprehension, convulsions, epilepsy, fainting, headache, lumbago, monoplegia, muddled speech, myo-neuralgia, neuralgia, numbness, paralysis, spasms and vertigo.

Research has shown the tuber has an anticonvulsive effect in rabbits. Injections of tuber extracts raised seizure thresholds, halted developing seizures and inhibited the development of epilepsy-like signs on EEG’s.

In one experiment, mice with artificially induced epilepsy were treated by intraperitoneal injections of alcohol extractions of Ononoyagara tuber. Seizures stopped! The effect of this herb was not as strong as that of phenobarbital, but the duration of effect was longer.

Practitioners’ Opinion
Throughout Japan, the tuber of this odd orchid is used in the treatment of nervous abnormalities including numbness, spasms in of the extremities, and headache. It is particularly effective in relieving facial muscle spasms and trigeminal neuralgia. When nervous abnormalities strike, especially those involving pain, this is the herb of choice