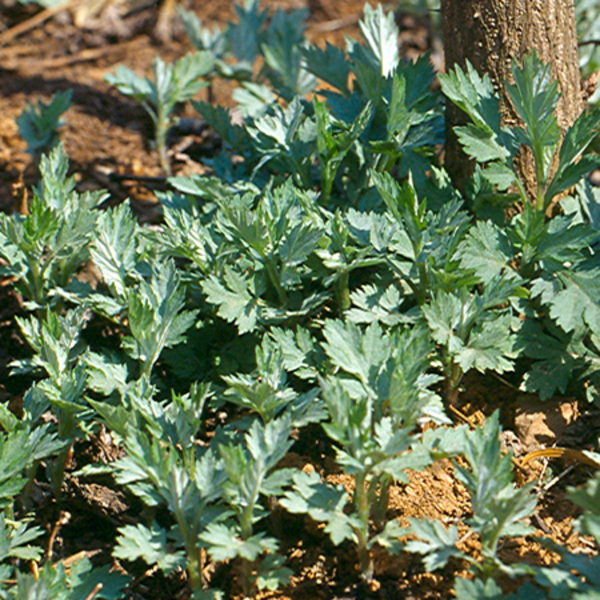 I am a gardener. Some years ago I bought a plant from a nursery and in the same pot was something that looked like a chrysanthemum. I thought great. A freebie. Wrong. In fact it turned out to be a chrysanthemum that never flowered and grew threw, over, and under every single plant in the garden. It put the invasive in invasive weed. I spent a long time trying but failing to get this nasty piece of work plant under control. Then, while working on a Japanese herbal medicine project, I realized my much despised weed was in fact a staple in Japanese herbal medicine. I went from hating it to loving it. Read on!

History and Traditional uses of Yomogi
Yomogi is a perennial member of the Daisy family, native to Japan. It can be seen in the mountains, fields, roadsides, and banks and is known as a very vigorous plant. Its leaf is feather shaped with deep incisions, bearing white dense hairs on its underside. It bears small buff colored flowers in summer.

Yomogi is an essential thread in the fabric of traditional Japanese life. In the past, at the time of the spring and autumn equinox people visited their ancestors’ grave and made offerings of flowers and foods to the souls of their ancestors. In the old days, it was customary for housewives to pick young Yomogi leaves and mix them with rice to make Kusa Mochi –a special rice cake. Kusa mochi was an important offering to the spirits of dead relatives. Indeed, the collection of Yomogi leaves for this purpose was a family event and outing. Beyond this, Yomogi was used to keep evil at bay and to prevent plagues from entering the house.

During the May festival, parents say special prayers to insure children grow to maturity and adulthood. As a part of this ritual, Yomogi leaves and Calamus root (Acorus calamus) are bundled together and placed under the eaves of the house. Indeed, as long ago as the year 8000 BC parents made balls of musk, cloves, Yomogi leaves and calamus and put them under the eaves of the house for this purpose. Today, the tradition has been simplified and parents simply bundle Yomogi and calamus and place it around the house.

The origin of this ancient custom is Chinese and predates the Japanese custom!
Perhaps the most famous use of Yomogi is in Moxibustion. It appears in the ancient medical book, ‘Meiibetsuroku’ published in China in 500 AD. Moxibustion involves placing cones of Yomogi on the body and setting them alight. This use of Yomogi leaves was probably introduced to Japan by the Chinese Buddhist monks. ‘Meiibetsuroku’ describes Yomogi as a source of healing power for whatever ailed a person.
Moxibustion became the rage among commoners in the Edo period. At that time having a treatment of moxibustion became an annual event to maintain health. Another common name for the plant is Mogusa or moxibustion grass. As moxibustion was widely used in in the Edo period, detailed information on cultivation, preservation, and preparation of Yomogi for moxibustion can be found in books from that period.

The Japanese primarily used moxibustion to stop bleeding in conditions like the irregular menstrual bleeding of women, hemorrhoids, and coughing up of blood.
Apart from moxibustion, Yomogi has been diversely used in Japanese folk medicine, internally and externally.

Today, people who chose not to use steroids for chronic inflammatory conditions used it as an alternative. Specifically, people with eczema or atopic dermatitis, asthma and chronically inflamed joints take the infusion internally and use it in the bath to keep their conditions under control.

Infection Cure
• Research shows decoctions Yomogi leaf has an in vitro inhibitory effect against Staphylococcus aureus, α-hemolytic Streptococcus, Streptococcus pneumoniae, Shigella sonnei, Salmonella typhi, and Salmonella paratyphi.
• Crushed fresh leaf of Artemisiae placed over the warts of 12 patients, repeatedly, led to the falling off of the warts within 3-10 days.
• Large doses of Yomogi leaf, given for two days to malaria patients two hours before the onset of symptoms controlled the condition in 89% of patients. In addition, over half the cases tested negative for parasites after the herb was thus used.

Asthma Aid
• Scientific research showed that is a smooth muscle relaxant. It does this by directly antagonizing slow reacting substances of anaphylaxis and inhibiting the release of inflammatory substances.
• It contains 4- terpineol which was shown to have a high anti-asthmatic activity-it induced tracheal smooth muscle relaxation. 4- terpineol has been also reported to have anti-tussive, expectorant, analgesic, sedative, anti-pyretic, and bacteriostatic activities.
• Oleum Argyi, a volatile oil extracted from Yomogi is particularly effective in the treatment of bronchitis and asthma. It has been found to be 85-90% effective in such cases. After spraying the volatile oil into the throat, a marked effect is felt within 30-60 seconds.

Chronic Inflammatory Conditions
Yomogi is highely recommended in all inflammatory conditions, especially asthma, hay fever, atopic dermatitis. In these cases, it should be used internally and put into the bath. It is safe to be used long term and should be used first to get the condition under control and then at any sign of a return of the condition.

Anti Infection
One of the new and yet very old uses in the prevention and treatment of malaria. Travelers venturing to countries with malaria are now again at risk, the traditional treatments are no longer working. Recent research and history reveals this is an excellent preventative which modern travelers should think about adding to their travel bag before heading to countries troubled with malaria. Indeed, it can be used to stimulate the body whenever infection is a problem.