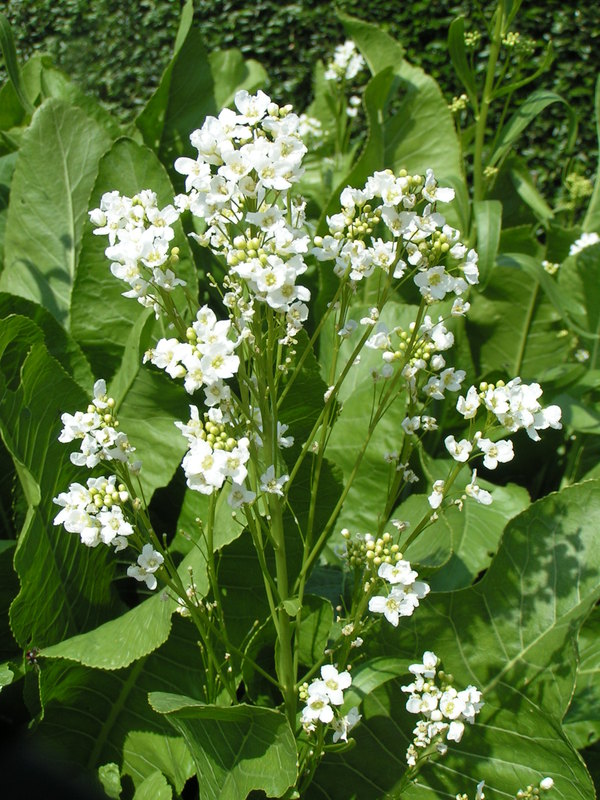 The horseradish gets its name firstly due to the family it belongs to and secondly due to common usage. The plant itself is a member of the mustard family along with common mustard, the radishes, cabbage, brocolai, cauliflower, and brussels sprouts. In old english gardening, horse attached to any plant refers to a common plant, usually one that would be found growing on the side of a road or in the horse pasture. There is also horse-mint, and the horse chestnut. So the horse- radish is the common radish or coarse radish.

Everyone should read old gardening and herbal texts, they are loaded with really funny statements. Gerard, my favorite garden writer

From the 16th century says that horseradish and grapes hate each other, and if you plant a a peice of horseradish next to a grape vine the grape will specifically grow in the opposite direction of the horseradish. I havent had the opportunity to give this a try, you might want to find out if he was right.

Everything we do and take for granted has some basis. What do i mean by this? Lets take horseradish for example. Today we eat horseradish , mixed with a little mayo, alonside of our roast beef. Where is this tradition from? In the ancient days people discovered that meals of heavy meat were hard to digest. They also found that horseradish broke up the fat of such heavy meats and aided in digestion. Gerard says the following, “Horse radish stamped with a little vinegar put thereto, is commonly used amongst the germans for sause to eate fish with, and such like meates, as we do mustard, but this kinde of sauce doth heate the stomacke better, and causeth better digestion.”

Interestingly enough the french still call horeradish moutarde des allemands, german mustard. All old herbals state that horseradish heats up the stomach and makes digestoin of meat a lot easier. So it bacame tradition to eat red meats with horseradish, to aid in its digestion. We like to think we discovered in the eighties that heavy meats are hard on the stomach. The ancients knew this and went one step further. They went ahead and ate an herb that wuold help the process along. Our horseradish and sourcreme combination isnt a new idea. Its a very ancient one.

Horseradish is a powerful meat tenderizer and the ancients used it to tendereize the dried meats so much a part of the everyday diet. Unlike today, fresh meat was a rarety. People owned one or two cows total. A cow would be slaughtered and have to last a family a few years. The meat was preserved, usually with salt. This results in some mighty dry and tough meat. The cooks would throw in part of a horseradish root to tenderize the meat in a stew.

Horseradish is an evergreen plant that keeps its kelly green leaves up year round. This was also a plus for the ancient garden , its stayed fresh and green all winter long. Most greens perish with the first good frost and are inedible. The cooks of yester year kept a stand of horseradish in the garden to provide some greens for the dead of winter. Remember, fresh greens are striclty a concept our century.

Horse radish was as well a plant of mededicine. Horse radish tea has the unique ability to bring on a serious sweat, and was used for just this purpose. As well it causes heavy urination and the combined action was thought beneficial in ridding the body of some toxin, a purging herb. One of its most common uses was as a blemish remover. From the dark ages forward woman have disliked freckles and age spots. The woman of the day made their own freckle remover and their main ingrediant was greated horseradish. Ironically one of the oldest recipe’s called for horseradish root and creme. So a few hunfred years ago fine ladies would massage their skin with what we eat our primerib with. Horeradish was reported to heal ulcers of the skin , and was found particularly good with the sort that wouldnt clear up. Says gerard ” therefore by his hot qualitie, it mendeth the skin in the face, and taketh away scabs, scarres, and manginesse, if any thing remaine after the healing of ulcers ans such like.

Horseradish contains an unbelievably high anount of sulphur and sulphur in many forms is known to be a healing aid to skin. The sulphur bathes world wide are famous for their healing capacity. Unlike dill, no one seems to recommend the use of horseradish on sores of the secret parts. I think this is probably due to its extreme heat. One other notable usage is for a cough that follows a flu or a cold. At times a cold is followed by an unnerving hacking cough that is hard to shake. Horseradish tea was taken 8 or more times a day to get rid of such a hack.

Horse radish is confined today to the side of roast beef and this is too bad on several accounts. Firstly the herb is wonderful with all meats. Chicken marinated in horse radish and grilled is a great treat. Added to any stew the root adds a great flavor. Many dont like horse radish as they have never sampled the fresh radish. There is no comparison between the jarred product and a fresh root dug from the garden.

And the best part is that horseradish is one of the easiest garden herbs to grow. And its a great additon to the garden. Its evergreen which right away is a plus for the garden, it stays green all winter long and adds a little color to an otherwise dull scene. How do you start a horse radish patch? This is the easy ppart. Almost every grocery store sells fresh horse radish root in the green section of the grocery , all you need is a few peices of the roots and thats all it takes to get a mess going. This radish can be grown in the ground or in a pot.

To start find out when the fresh horseradishes are expected in , and go that day and pick up your roots. Even the dried up roots found at most stores that have been out of the ground for several mothes are apt to grow, but the fresher the better.

You can plant a horse radish patch at any moment the ground is workable, though spring and fall are the best times to get started.

When you are at the pile of fresh root you will notice that some of hte roots have almost a handle like end and others dont. Horse radish roots grow long and thick, the top of the root holds the stems and the bottom doesnt. All roots will grow, but the roots with this handle like swelling at the top grow the most rapidly. Examine the roots and select roots that have this swelling. For an average family 5 roots will produce more than enough horse radish.

Once you get your roots home soak them in water over night. They tend to dry out in shipping and can use a good saok. In the morning set out for the garden, wet roots in tow. Horseradish needs to be planted only once. Once its in the ground, its in for good. So pick your site carefully. I stuck a peice in one corner of my garden woithout thinkng a few years ago and havent been able to get it out since. I keep pulling suckers out every spring, and they keep popping up. So pick your site carefully. Horse radish will live happily with half a days sun but produces thicker roots in full sun. An ideal location is right around the spicket, all the water results in really succulent roots. Like most plants horse radish loves rich soil, nicely turned over. I have never bothered with much soil prep for this glorified weed. I just dig a hole and drop the root in. The beauty of this herb is that it grows no matter what.

Dig a hole about six inches down and place the knobby or fattest end at the top of the hole. Covre with soil and wait. The shoots will appear in a few weeks and will within a few weeks enmasse a great heap of green. Once the first shoots surfaces it will quickly be followed by a number of suckers. The entire area will quickly be filled with horse radish.

If you want to grow some horseradish on the window ledge or on the patio you will not be disappointed. To grow some really great roots you need a terrace or some outside space. Not so much because the plant doesnt like the window sill, but more because the sindow sill is not big enough to hold a pot large enogh to grow big roots. To grow on the terrace i suggest you get your hands on a wooden apple bushel basket. If you live in the city these can be had at most farmers markets. Go at apple season, namely the fall, and ask to buy one from one of the venders. Take your apple bushel basket home and line with a garbage bag. Punch a few holes in the bottom of the plastic bag so the pot drains. Fill with potting soil, and plant 3 peices of horse radish root. Keep well watered. The bushel will quickly be covreed in kelly green.

When it comes to using your horse radish, dont forget the leaves make a great pot herb. Pick a potful of leaves, wash and steam. Once steamed hit them with a slab of butter or a splash of vinegar and oil. This is a spicy dish, but a nice companion to a heavy meat dinner. The leaves can be picked off at your leisure, any time of the year.

The roots as well can be harvested at a need basis. When you need some fresh horseradish, go out ot the garden and pull a root . Cut the leaves off, and use them with dinner. The root needs to be washed with a scrub brush to get the dirt and tender skin off. Fresh horse radish usually doesnt need peeling. Once your satisfied the root is clean enough for your liking, grate it finely, and use as you wish. Pick only enough to be used up at one sitting. Remember, fresh hore radish is where its at. My favorite thing to do with horse radish is to take a carrot pealer to the root, finely shaving off threads. I take these threads and stir in a little sour creme and serve with a chilled fish.