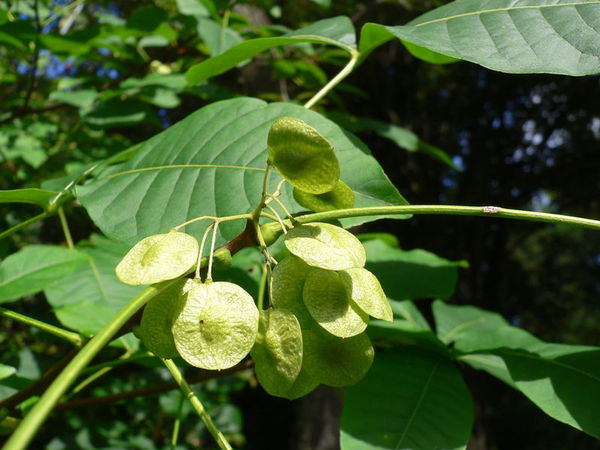 According to the Eclectics, Ptelea is tonic and was used in intermittent fevers, remittent fevers, and all cases of debility where tonics are indicated. They used it especially when acute or chronic infections were wearing a person down to the point of death.

1854. John King. Materia Medica. – PTELEA TRIFOLIATA
Properties and Uses – Ptelea is tonic. Used in intermittent fevers, remittent fevers, and all cases of debility where tonics are indicated. said also to be anthelmintic. Equal parts of Ptelea and Euonymus Atropurpureus, have been highly recommended in pulmonary affections. A tincture of Ptelea, made in whisky, is reputed to have cured several cases of asthma, and it is said to cause, in many instances where it has been used, a troublesome external erysipelatous inflammation, either general or local, but which if the use of the tincture be persisted in, finally disappears, and the patient becomes at the same time permatently cured of the disease for which he was treated. This would certainly indicate other valuable properties in this plant, then those with which
we are acquainted, and deserves a further and thorough investigation. It may be used in powder, tincture, or extract. Dose of the powder, ten to thirty grains, three or four times a day; of the tincture, one or two fluidrachms; of the extract, five to ten grains.

Ptelea is an excellent tonic, hardly surpassed in its general uses by any agent of our Materia Medica, if we except Hyudrastis. It may be employed in all atonic states of the stomach and upper intestinal canal, when it is desirable to increase the appetite and digestion. It exerts a specific influence in some cases of asthma, giving present relief, and effecting permanent cures. I have used it in a considerable number of these cases, but can not give any symptoms which would lead me to prescribe this in preference to other remedies.

1883: Scudder (tonic)
(The bark of the root Ptelea Trifoliata)

Therapeutic Action – The Ptelea is tonic, stimulant, expectorant, alterative, astringent and diaphoretic. Among its uses may be noted its influence in some cases of asthma, greatly relieving the patient, and sometimes accomplishing a cure.

It is a good tonic and stomachic, and as such may be used in debilitated states of the system, in dyspepsia, anorexia, intermittents, convalescent stages of other diseases, and, in short, whenever a corroborant is demanded. We have found the tincture beneficial in chronic rheumatism. Others have used it in the same disease wtih advantage. Its pungent, excitant, tonic, diaphoretic, and alterative properties would seem to point to it as a useful remedy, in the chronic forms of that disease, attended with debility and requiring excitants.

1898: Felter and Lloyd – PTELEA – WAFER ASH
Action, Medical Uses, and Dosage – Ptelea is tonic, and surpassed in this line only by hydrastis. Used after intermittnt fevers, remittent fevers, and all cases of debility where tonics are indicated. Said also to be anthelmintic. Equal parts of ptelea and Euonymus atropurpureus, have been found very useful in pulmonary affections. A tincture of ptelea, made in whiskey, is reputed to have cured several cass of asthma, and is said to cause, in many instances where it has been used, a troublesome external erysipelatous inflammation, either general or local, but which, if the use of the tincture be persisted in, finally disappears, and the patient becomes, at the same time, permanently cured of the disease for which he was treated. This would certainly indicate other valuable properties in this plant, than those with which we are acquainted, which deserve a further and thorough investigation. Prof. I. G. Jones stated that this bark is a pure, unirritating tonic, having rather a soothing influence when applied to irritated mucous membranes. He has employed it advantageously in convalescence after fevers, and in debility connected with gastro-enteric irritation. It promotes the appetite, enables the stomach to endure suitable nourishment, favors the early reestablishment of digestion, and will be tolerated by the stomach when other tonics are rejected. He employed it in cold infusion, of which 1/2 fluid ounce may be given every 2, 3, or 4 hours, according to circumstances. It is also said to cure intermittent fever, and is considered by some to be equal to quinine. It may be used in powder, tincture, or extract. Dose of the powder, 10 to 30 grains, 3 or 4 times a day; of the tincture, 1 or 2 fluid drachms; of the extract, 5 to 10 grains; specific ptelea, 1 to 20 drops.

Specific Indications and Uses – Asthmatic breathing; chronic diseases, with sense of constriction in the chest, and short breathing.

1898: Webster: (Digestive)
Wafer ash is a splendid tonic, and will afford satisfaction in debilitated states of the stomach and small intestine as frequently as any other remedy. It improves appetite, digestion, assimilation and retrograde metamorphosis.

It improves the power of the pneumogastric nerve, and has been useful in some cases of dyspnoea. At one time it was considerably lauded as a remedy for asthma, but has been found wanting as a means of much service here.

Hale characterizes this remedy as a powerful one, not active, like podophyllin and iris, but pervading. It ought to be adapted to tissue changes in any part for which it has a specific tendency.

Dose- This may vary from one drop to half a drachm.

Wafer Ash possesses properties fitting it for the treatment of painful affections of the muscles. It is especially adapted to tose cases arising in malarious regions complicated with debility of the gastric functions. In chronic rheumatism of this character it should be given a fair trial.

SPECIFIC PTELEA – This preparation contains a large amount of fixed oil and resinous material. When added to water it becomes milky and precipitates on standing.

This is a native shrub with large greenish flowers and an unpleasant odor. In preparing a tincture use eight ounces of the bark of the root to one pint of seventy-six per cent, alcohol. Dose, from ten to twenty-five drops. It is tonic, stimulant, alternative, diaphoretic, and astringent. It is used as a tonic in dyspepsia, anorexia, etc. In chronic intermittent fever it also does good service. It is a fairly good drug in chronic affections of the respiratory organs, atonic laryngitis, asthma, pthisis, bronchitis, etc. Diarrhoea and dysentery are cured by it.

1911: FYFE
Chronic diseases, when there is a sense of constriction in the thorax and short respiration, reflex nervous disturbances due to derangements of digestion and assimilation, fullness and aching in hepatic region, mental confusion and despondency, scanty red urine, depositing a red sediment(urates) on cooling, asthma, especially when originating in disorders of the stomach. This is a valuable agent in asthma. It does not give immediate relief, but its continued use exerts a decided influence in a curative direction. Ptelea trifoliata is a pure unirritating tonic.

Preparations – Specific medicine Ptelia. Dose, from one to twenty minims.

Therapy – The agent is a mild tonic, exercising a direct influence upon the stomach and digestive apparatus, correcting certain faults of gastric secretion, overcoming dyspepsia and improving the appetite. It may be given to good advantage with other stomachic tonics and iron. It corrects atonic diarrhoea and is of benefit in dysentery, its pungent properties and sufficient astringency renders it of benefit in mild cases. In full doses it acts upon the skin as a diaphoretic. It has been given in lung troubles, but we have other active remedies which produce more gratifying results.