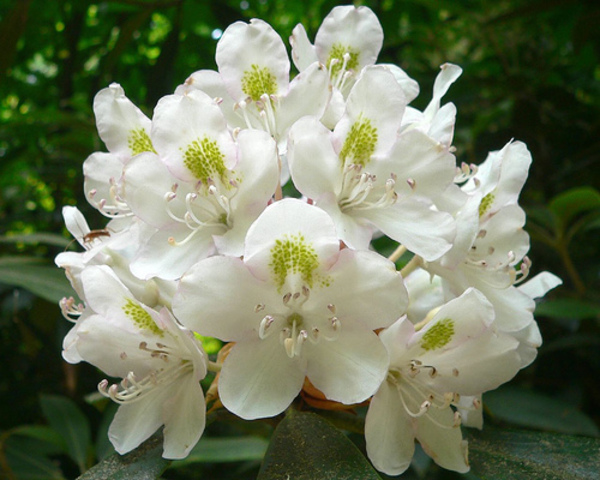 Rhododendrum was used by the Eclectics as a circulatory stimulant, along with aconite and veratrum. This is not a consumer friendly herb and has fallen out of use.

1873: Scudder
A tincture is prepared from the fresh leaves collected in september, that we employ is imported from Germany . Two native species,the R.maximum and R.punctatum possess similar properties, but much milder, and should be tested.

The influence of the rhododendrum on the circulation is very marked. It undoubtedly acts like veratrum an aconite, stimulating the circulatory apparatus through the sympahtetic, and diminishing the frequency of the pulse by increasing the power of the heart, and removing the capillary obstruction. Acting in this way, it has been employed with advantage in rheumatism, gout, syphilis, and some acute diseases. It is claimed to exert an influence upon the reproductive apparatus, being used in orchitis, in suppression of gonorrhea, and in hydrocele. It has been but little employed in this country, but our native specimens deserve a thorough examinations.

1898: Felter and Lloyd – RHODODENDRON – ROSEBAY
Action, Medical Uses, and Dosage – Yellow rhododendron contains a stimulant, narcotic principle; for it increases the heat of tbe body, excites thirst, and produces diaphoresis, or an increased discharge of the other secretions or excretions, and which are generally followed by a decrease of action of the arterial system. With some persons it causes emeto-catharsis, inebriation, and delirium. The Siberians use a decoction of it in chronic rheumatism and gout. They put about 2 drachms of the dried shrub in an earthen pot, with about 10 ounces of boiling water, keeping it near a boiling heat for a night, and this they take in the morning. Beside its other effects, it is said to produce a sensation of prickling or creeping in the painful parts; but in a few hours the pain and disagreeable symptoms are relieved, and 2 or 3 doses generally complete the cure. The use of liquids is not allowed during its operation, as this is apt to induce vomiting (Ed. – Coxe). It is a valuable remedy, used in Russia , Germany , and sometimes in France and England , but scarcely at all in this country. That it possesses a decided control over the circulation, acting like the special sedatives, slowing the quickened pulse by giving increased heart power and removing capillary obstruction, seems well established. Myalgic pains, whether rheumatic or not, but especially of the facial and ocular region, appear to be the special indication for its use. It has been employed in acute testicular, and ovarian affections, as well as in chronic orchitis and hydrocele. The dose should be minute, from a fraction of a drop to a drop of a saturated tincture. Probably our native species would be fully as effective.

1898; Webster; (Muscles) – Rhododendron
This drug is recommended by homeopathic authorities in rheumatic prosopalgia (face-ache). It seems to possess an affinity for the muscles of the face especially. It has also been successfully used in ophthalmic practice in painful conditions of the eyeball, the muscles probably being the seat of pain. It may prove a satisfactory remedy in rheumatic ophthalmia, and other myalgiae of the eye.

Rhododendron has also been employed in muscular pains of other parts of the body, as of the cervical and thoracic muscles and those of the extremities. It is asserted to be best adapted to myalgia occurring during warm weather.

Form for Administration – The tincture from a homeopathic pharmacy.

Dose – From the fraction of a drop to a drop.

1911: Fyfe
Severe and obstinate coughs, especially when there is little or no expectoration, coughs accompanied by a sweetish ordor of the breath, and a tremulous pulse, cutaneous diseases characterized by dry and scaly conditions. Rhododendrum maximum is alterative, expectorant, diaphoretic, and astringent.