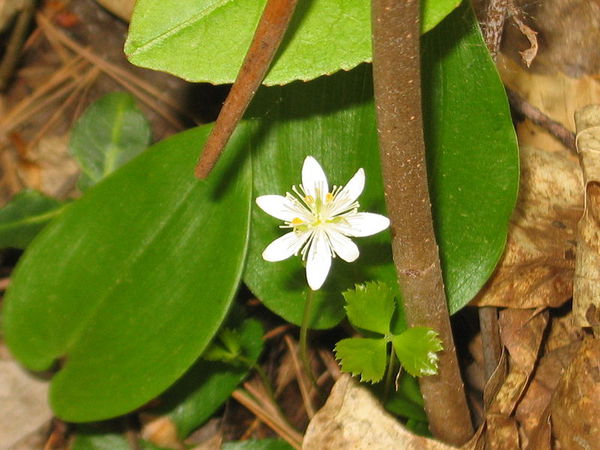 1854: JOHN KING – COPTIS TRIFOLIA – GOLD THREAD
Properties and Uses -Goldthread is a pure and powerful bitter tonic, somewhat resembling quassia, and colombo , without any astringency. It may be beneficially used in all cases where a bitter tonic is admissible, and is decidedly efficacious, as a wash or gargle, when in decoction, in aphthous and other ulcerations of the mouth. In dyspepsia, and in chronic inflammation of the stomach, equal parts of goldthread and golden-seal made into a decoction, with elixir vitriol added in proper quantity, will not only prove effectual, but in many instances of the latter kind, will permanently destroy the appetite for alcoholic beverages. Dose of the powder or tincture from half a drachm to a drachm; of the decoction, from two to six fluidrachms; the tincutre made by adding an ounce of the powdered root to a pint of diluted alcohol is preferable to the powder.

1855; Dyer (Vegetable Principles) – COPTIS TEATA – GOLD THREAD
It is used for sore mouth. It is a tonic and makes a good bitter.

Therapeutic Action -The Coptis acts as a tonic and stomachic. It is a mild, simple, and pure bitter, closely resembling Hydrastis, Columbo, Quassia, Gentian, etc., in its medicinal properties; and it may be used as a substitute for some medicines when they are not at command. It is a valuable tonic and stomachic in dyspepsia. In cases of anorexia, a few if any articles will be found superiod to this in promoting the appetite; and but few to exceed it, when the digestive functions are enfeebled, in facilitiating their restoration to a normal standard.

Medical History and Properties – The various species of the Coptis are esteemed as excellent bitters in all parts of the world to which they are native, and are used in domestic practice. Occasionally they are honored by papers from medical writers, some of whom recommend it for intermittent fever, etc., but the record shows that substances equally as effective and cheaper can usually be more easily obtained. Coptis trifolia is typical of the other species, and the thread-like rhizome of this plant has long been used in domestic medicine in the Northern States, especially in New England during the early part of this century. Indeed, there is no evidence to indicate that it was not employed from the time of the settlement of the country. Cullen’s Materia Medica, with additions by Barton, places Coptis and xanthorrhiza together, and recognizes Coptis under the Helleborus trifolius, remarking as follows: They are pretty pure bitters, but I am not certain that they possess peculiar virtues. The country people formerly thought, and still contend, that Coptis is valuable in the treatment of aphthous sore mouth, and this was accepted until 1817 by the medical profession. Thus, we extract from an early edition of Coxe’s Dispensatory as follows: They (Coptis rhizomes) possess a considerable degree of astringency and bitterness, and have long been employed by the people in the country as a remedy for aphthous and cankerous sores in the mouths of children, with considerable benefit. In 1817, Vol. I. of Bigelow’s American Medical Botany appeared, and taking issue with all other writers, Dr. Bigelow asserted that Its reputation, however, in these cases is wholly unmerited, since it possesses no astringent or stimulating quality by which it can act on the ulcerated spots, and when benefit has attended its use it is doubtless to be ascribed to other articles possessing he above properties, with which it is usually combined. This statement of Bigelow was accepted without question by the medical profession, and from that day authorities simply stated that it was a tonic bitter similar to quassia, gentian, and columbo, although its principal constituent, berberine, in our opinion should rather classify it with the species of berberis, xanthorrhiza, and other bitters containing that alkaloid. The first edition of the United States Dispensatory (1833) followed Bigelow, and has continued the subject unchanged until the present day; and the voice of the medical profession is expressed by this paper, which doubtless awards, as follows, to the plant all the credit it merits:

It is a simple tonic bitter, bearing a close resemblance to quassia in its mode of action, and applicable to all cases in which that medicine is prescribed, though from its higher price not likely to come to general use as a substitute. In new England it is much employed as a local application in aphthous ulcerations of the mouth; but it probably has no other virtues in this complaint than such as are common to all the simple bitters. It may be given internally in substance, infusion, or tincture. The dose of the powder is from ten to thirty grains; of a tincture prepared by macerating an ounce of the root in a pint of diluted alcohol, one fluid drachm.

1909: Felter and Lloyd: COPTIS – GOLD-THREAD
History – Gold-thread is found growing in the northern parts of the United States , following the Appalachian range as far south as northern Alabama , and in Canada , Greenland , Iceland , and Siberia . It grows in dark swamps and sphagnous woods, flowering from early in the spring to July. “Northern cedar and spruce and balsam swamps always abound with it. Another favorite habitat of the plant is the cold swamps, such as are found in mountain plateaus. It often grows freely in beds of sphagnum and other mosses, especially in woodes swamps. Although coptis is a swamp plant, it is not a mud plant, but generally selects the dry knolls surrounded by wet soil” (C. G. Lloyd, Drugs and Med. of N.A., Vol. I, p.195). At one time it was so popular as a domestic remedy that more of it was sold in Boston than almost any other indigenous drug (Bigelow). It is now but little employed. Autumn is the season for collecting coptis, when it should be dried with care. Its properties are imparted to water, but more perfectly to alcohol, and the solutions are precipitated by nitrate of silver and acetate of lead.

Action, Medical Uses, and Dosage – Gold-thread is a pure and powerful bitter tonic, somewhat like quassia, gentian, an dcalumba, without any astringency. It may be beneficially used in all cases where a bitter tonic is required, and is decidedly efficient as a wash or gargle, when in decoction, in various ulcerations of the mouth. In the nursing sore mouth of mothers we have repeatedly and promptly cured with the decoction when infusion of hydrastis had no effect. This would seem to indicate that its virtues are not wholly dependent upon berberine as is generally supposed. In dyspepsia, and in chronic inflammations of the stomach, equal parts of gold-thread and golden-seal, made into a decoction, with elixir vitriol added in proper quantity, will not only prove effectual bit in many instances of the latter kind, will permanently destroy the appetite of alcoholic beverages. Dose of the powder, or tincture, from 1/2 drachm to 1 drachm; of the decoction, from 2 to 6 fluid drachms; the tincture, made by adding an ounce of the powdered root to a pint of diluted alcohol, is preferable to the powder.