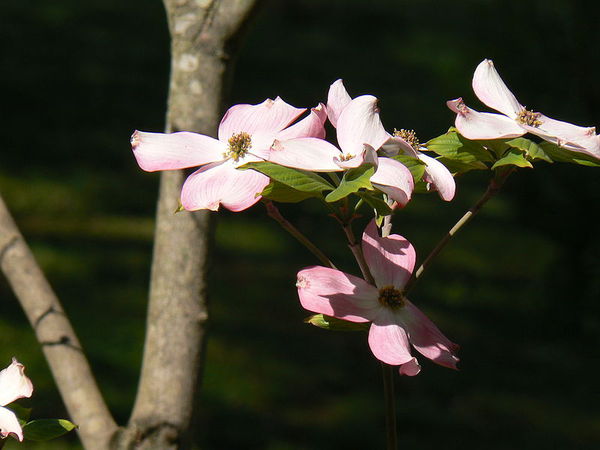 Chapter from my PhD Thesis
Notes from the Eclectic Physicians

Dogwood Chapter from my PhD

History
Cornus florida is native to the United States and can found from New England through Southern Georgia and as far west as Illinois . It is well known for its simple white flowers that dot the woodlands in early spring. Used by the Native Americans as a medicine and a dye plant, the drug was quickly taken up by the colonials who used it to treat malaria. It was used extensively during the Revolutionary War to treat malarial conditions. In 1828, Raffinesque lists the drug as being bitter, astringent, aromatic, tonic, antiseptic, coroborant, and stimulant. He recommended it in all febrile conditions including intermittent and remittent fevers, malaria, typhoid fever, colic, and as an antiseptic in foul ulcers, cancers, and sores. Raffinesque made a comment that can be found throughout the early American medical literature—the drug was the best native substitute for Cinchona. (11) Not surprisingly, King mentions it in his 1848 medical and botanical dictionary as a malaria treatment. (1)

Digestive
Dyspepsia, constant nausea, bitter taste in the mouth, aversion to food, indigestion, enfeebled conditions of the stomach and bowels.

State of Resistance
The drug was used to raise resistance to malaria, febrile diseases, typhoid fever, quinine,
and gangrene.

State of Exhaustion
The drug was used when resistance to malaria and other febrile diseases could not be maintained and State of Exhaustion set in. Signs of State of Exhaustion treated with the drug included general exhaustion, feeble and relaxed tissues, feeble pulse, subnormal temperature, and atonic habits with diminished physiological functions, digestive abnormalities, gangrene, gangrenous ulcers, and mortification.

Adaptation Energy
From Selye’s perspective, the drug was used to augment the GAS, which suggests it increases Adaptation Energy. Evidence to this effect includes the following. The drug was used to raise resistance to infectious disease. It was used when resistance to infectious disease could not be maintained and State of Exhaustion set in. When vitality was low and physiological functions were thereby depressed, the drug was employed. A telling statement comes from Dr. King, “ Its internal employment increases the force and frequency of the pulse, and elevates the temperature of the body .” The drug was used to increase vital action of the bodies systems. Lastly, it was used internally and externally to prevent or correct gangrene and to stimulate healing in non-healing wounds.

Eclectic literature indicates the drug, when correctly prepared, is safe and innocuous. (1–9)

Clinically, the drug was used to raise resistance to bacterial and protozoan infection. (1–9)

Clinically, the drug was used normalise body functions when an external force (malaria) was depleting energy and thereby causing depressed function and action. In addition, it was used to normalise the physiological abnormalities associated with State of Exhaustion . (1–9)

Discussion
The drug exhibits properties consistent with Brekhman’s definition of an adaptogen. It is innocuous; it raises resistance to varied stressors, and normalises physiological function.

When the Eclectics movement began, Cornus florida was seen as a malaria drug. The Eclectics used it for that purpose. Over time, their use of the drug became more sophisticated. They used it with patients who could not tolerate Cinchona rubra. They discovered that it worked against malaria when Cinchona rubra was ineffective. They used it in patients suffering from Quinine poisoning. They used it when resistance to malaria could no longer be maintained and State of Exhaustion set it. Lastly, they discovered Cornus florida could be used in other infectious diseases, when the body was still able to resist those infections, and when resistance failed.

Potential Clinical Applications
For all these reasons, there is evidence suggesting Cornus florida may have a role in raising resistance to malaria infection, especially in resistant forms of malaria and in patients unable to tolerate the quinine derivatives.

Eco-availability
The tree is abundant in the wild and is readily cultivated.

1854: JOHN KING – CORNUS FLORIDA – DOGWOOD
Properties and Uses – Dogwood bark is tonic, astringent, and slightly stimulant; it is, probably, the best native substitute we have for the cinchona, having often succeeded in preventing the return of parozysmal fevers, where the foreign drug proved ineffectual. It may be used in all cases where quinia is indicated and cannot be adminstered, owing to idiosyncrasy, etc, or where it cannot be obtained pure. It may be used with advantages in all cases where tonics are required, in periodical fevers, typhoid fevers, etc. Its internal employment increases the force and frequency of the pulse, and elevantes the temperature of the body. It should be used in the dired state, as the recent bark is apt to disorder the stomach, and produce pains in the bowels, but which may be relieved by a few drops of laudanum. The cornine prepared by Mr Merrell is much used as a substitute for quinia, by Eclectics, and is frequently preferred by them to be alkaloidal salt. It may be variously combined with xanthoxylin, myricin, salicin, hydrastin, podophyllin, or hydro-alcoholic extract of cimicifuga, in the different affections for which it is adminstered. An extract of the bark prepared by boiling it in water, and evaporating to the proper consistence, will be found the best form in which to adminster it. Dose of the powdered bark, from twenty to sixty grains, as often as required; of the extract from five to ten grains; of cornine from one to ten grains or more. The ripe beries, infused in brandy, are sued in some sections of country as bitters; and an infusion of the flowers forms a good substitute for chamomile-flower tea.

Therapeutic Action -Cornus Florida is tonic, corroborant, astringent, antiseptic, and stimulant, It resembles the cinchona in its medical properties and uses, and may be employed as a substitute in the various cases in which that is recommended.

When administered it is found to augment the force and frequency of the pulse, and elevate the temperature of the body. It has been employed in intermittent fever as an antiperiodic; but since the introduction of the sulphate of quinine into general use, it has fallen into disuse. It is more frequently prescribed in atonic habits, when there is a relaxed or enfeebled state of the system, than for any other purpose.

It is sometimes used as a stomachic bitter in dyspepsia, and as a prophylactic to fevers.

In cases of gangrene and mortification it is occasionally used, both internally and externally. The finely pulverized bark may be applied as a poultice to gangrenous ulcers, or to parts approaching gangrene.

1887: Scudder: CORNUS FLORIDA – DOGWOOD
The dogwood bark is a very good tonic, and may be used either in infusion or a tincture made with alcohol or whisky.

BOTANICAL ORIGIN – The bark of Cornus florida , Linne; Nat. Ord., Cornaceae. Woods of the eastern half of North America .

This agent resembles willow bark in action. It is slightly astringent and antiseptic, but chiefly tonic. It is used only in atonic states, and gives good effects in atonic dyspepsia an in intemittents. Some employ it as a prophylactic against malarial and other fevers. In gangrenous mortification use the infusion both locally and internally.

Use: It is a tonic and antiperiodic and of special value in chronic malaria with weak pulse, depressed temperature, relaxed and feeble tissues and general exhaustion,in which cases it should be combined with other indicated remedies. It tones up the system, counteracts the malarial poison, improves digestion and appetite.

1909: Felter and Lloyd: CORNUS – DOGWOOD
History – Cornus florida grows in various parts of the United States , but more abundantly in the middle states. It flowers in April and May, sometimes earlier and sometimes later than this, depending upon the climate. The fruit matures in autumn. This is one of the most conspicuous and handsome of our native trees when in bloom, and is frequently cultivated for its singular beauty. Its leaves turn red in the autumn. The wood is very compact and hard, and capable of receiving a high polish, and may be employed for many purposes. The American Indians extracted from the twigs and roots of this and other species a scarlet coloring matter for dyeing purposes. Dogwood bark was used considerably during the American Revolution as a substitute for Peruvian bark.

Action, Medical Uses, and Dosage – Dogwood bark is tonic, astringent, and slightly stimulant. It forms an excellent substitute for Peruvian bark, having frequently proved efficient in periodic attacks when the foreign drug failed. It may be used in many cases where quinine is indicated and can not be administered, owing to idiosyncrasy, etc. It may be used with advantage in cases where tonics are required, in periodical fevers, typhoid fevers, etc. Its internal employment increases the strength and frequency of the pulse, and elevates the temperature of the body. It should be used in the dried stage, as the recent bark is apt to derange the stomach, and cause more or less pain in the abdomen, but which may be removed by 10 or 15 drops of laudanum. It is useful in headaches from quinine, in general exhaustion and pyrosis. An extract of the bark prepared by boiling it in water, and evaporating to the proper consistence, will be found one of the best forms in which to administer it. Dose of the powdered bark, from 20 to 60 grains, as often as required; of the extract, from 5 to 10 grains. The ripe berries formed into a tincture with brandy or whiskey, are a popular bitters among some country people; the flowers are occasionally used in the place of chamomile. Specific cornus, 1 to 20 drops.

Therapy – This agent is indicated not only to correct the atonic conditions of the glandular structure of the gastro-intestinal apparatus in malaria, but as an antidote to the malarial poison itself. It has marked control over many of the manifestations of malaria.

Its influence upon the stomach in these cases increases the appetite at once, improves the character of the digestion and relieves the drowsiness and dullness apt to follow imperfect digestion. It is a tonic in enfeebled conditions of the stomach from whatever cause and improves intestinal digestion.