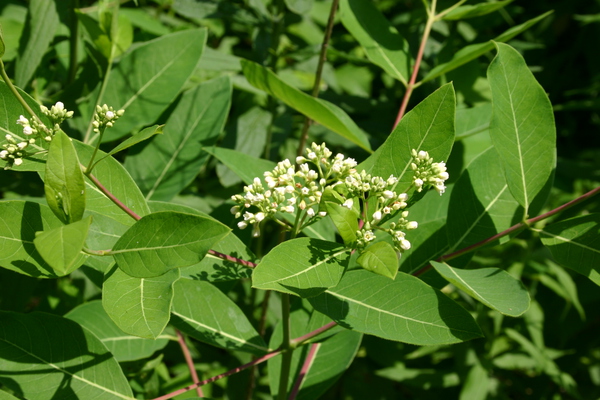 1828: Raffinesque
The root, when chewed , has an intensely bitter and unpleasant taste…This is a very active plant, highly valued by the southern Indians, It is tonic, emetic, alterative, and anti-syphilitic. The root is the most powerful part;but it must be used fresh, since time diminishes and destroys its powers. At the dose of 30 grains of the fresh powdered root, it acts as an emetic, equal to ipecuhuana, in smaller doses, it is tonic, useful in dyspepsia and fevers. The chickasaw and choctaw consider it a specific for syphilis, they use the fresh root, swallowing only the juice.

Therapeutic Action: The Apocynum is an emetic, cathartic, expectorant, diaphoretic, diuretic, alterative, tonic, and errhine. In full doses it causes nausea, with a reduction of the frequency of the pulse, and a tendency to sleep, vomiting etc., succeeded by large watery discharges from the bowels with general perspiration. The medical properties of the Apocynum are various and important. In suitable doses it is a mild, safe and tolerably active emetic. It produces more or less drowsiness, and a reduction of the pulse, which seems not to depend wholly upon the exhaustion which follows from vomiting.

Although this agent is emetic, yet it is not very often used for this purpose, being more frequently employed as an aperient and hydragogue cathartic, diuretic, and in small doses as a tonic. It is not unfrequently prescribed by physicians in the country as a substitute for the ipecacuanha. It may be used in the early stages of intermittent and remittent fevers, as well as in many other cases in which emesis is indicated. If administered in doses not sufficiently large to cause vomiting, and repeated every two or four hours, it acts as an important agent in dropsy; we have used it in many cases of hydrocephalus with unequivocal advantage, and in hydrothorax and ascites, much benefit may be expected from its employment. As a hydragogue cathartic, diuretic, diaphoretic, and tonic it seems to give promise of becoming a highly valuable therapeutic agent in this class of diseases; indeed there are those who regard it almost as a specific.

When combined with the bitartrate of potassa and the spearmint, its efficacy is increased. In this form it should be given so as to keep up frequent purging, for several days in succession. Its tonic properties counteract to a great extent the debility which might otherwise arise where used so profusely.

At the same time that it stimulates the intestinal exhalants, it promotes active diuresis and absorption. Specific Indication: The tissues are full, as if infiltrated with water ‑ oedema. Uterine hemorrhage, with full, relaxed uterus. Hemorrhage from the lungs, with sense of fullness and oppression. Specific Uses: It may be used in any disease having the characteristic symptom ‑ watery fullness of tissue, oedema. It is especially the remedy in many cases of dropsy, removing the fluid and curing the diseased condition upon which the dropsical effusion depended. It is a prominent remedy in rheumatism presenting this symptom. In uterine hemorrhage with oedema of feet, or in hemorrhage of the lungs with same symptom, I should not think of another remedy.

1898: Webster
Apocynum selectively influences the upper portion of the pharynx, and is applicable to acute inflammation of this part involving the posterior nares. It is almost as positive as phytolacca in its influence here, and when the irritation is confined to this spot, especially if there seems a predisposition to contract the trouble on slight exposure, it is the preferable remedy.
The remedy also has an application in dyspeptic conditions attending diabetes insipidus, “a sensation at the pit of the stomach, of sinking,” being asserted as a characteristic symptom calling for it.

Dose- From the fraction of a drop to five drops.

1909: Felter and Lloyd – APOCYNUM (U.S.P.) – APOCYNUM
Action, Medical Uses, and Dosage – Dr. Griscom states that this agent has four different and distinct operations upon the system, which it almost invariably produces, viz.: (1st) nausea or vomiting; (2d) this is followed by increased alvine discharges, which are succeeded (3d) by copious perspiration, and in many instances (4th) by diuresis. In full doses it occasions considerable sickness at the stomach, lessens the pulse, and produces an inclination to sleep, probably from some somniferous principle in it – copious vomiting soon ensues, and the other effects as above stated. Snuffed into the nostrils, the powder will excite sneezing. In diaphoretic doses it has proved beneficial in intermittent and remittent fevers, and pneumonic affections. A strong decoction in doses of a teaspoonful every 1, 2, or 4 hours, is exceedingly valuable in irritable and congested uterus, accompanied with nausea, vomiting, tympanitic abdomen, headache, and powerful pulsations of the abdominal aorta. In some cases it may be advantageously combined with asclepias. As a hydragogue cathartic, and also as a diuretic in those instances where this effect is displayed, it has been found most useful in dropsy. Indeed it has proved very efficient in dropsy and its accompanying symptoms, when associated with general debility or a strong tendency to struma, albuminuria being absent, removing the effusion without necessarily inducing watery stools. It is, however, seldom employed in dropsical complaints for its purgative action, but rather in the small dose for its action in removing oedematous infiltration, probably acting upon the heart by strengthening that organ, and thereby affecting the kidneys, secondarily inducing diuresis. Used for this prupose, it is the most certain diuretic in the materia medica. Certain conditions, however, govern its use. If dropsy be dependent upon structural lesions, as organic disease of the heart, liver, or kidneys, apocynum will not relieve the trouble, thought it becomes a useful addition to digitalis, strophanthus, cactus, and other remedies used to mitigate the urgent symptoms. Neither would it act well where the pulse is quick and hard, evidencing circulatory obstruction, and in febrile disorders. The cases calling for apocynum are those of debility or weakness, that atonic state which readily permits exudation from the blood vessels. Under such circumstances it is positive whether it be simple oedema or anasarca, ascites, or dropsy of any of the serous cavities. The indication is watery fullness of tissues, as if infiltrated. It may be puffiness of the eyelids, feet or other parts; the parts pit upon pressure; and there may be a blanched, glistening appearance of the skin. Chronic cases, as a rule, are those in which it acts best, though it is of great value in acute hydrocephalus, as well as the chronic form, the fontanelles protruding, the sutures spreading, the eyes prominent, and the lids puffy. The dropsies following ague and scarlatina are particularly cases for its employment. In gynaecological practice it is of value in amenorrhoea, passive menorrhagia and leucorrhoea with watery discharges, the uterus being in all these disorders ful and relaxed. Usually there is oedema of some other part. In menorrhagia the profuse flow lasts too long and too frequently recurs. It is a good remedy for the depression attending old cases of scrofula and syphilis, and in atonic dyspepsia fulfils an important use in removing constipation and fluid accumulations when present. Rheumatism yields to it when oedema of a part of or whole of the body is present, or even where there is slight puffiness or glistening of the parts. Frequently it must be given with other antirheumatics.

Apocynum is a decided heart tonic. The conditions above named, and a dilated condition of the cardiac ventricles, point to its use. It is not the remedy where circulation is excited, with hard, quick pulse. Dr. E. R. Freeman reports an inveterate case of angina pectoris benefited by it. Oedema was a feature of the case. Dr. Waterhouse (Ec. Med. Gleaner, 1891) relieved the praecordial oppression of a smoker with it. Dr. J. C. Kilgour (Ec. Med. Jour., 1886( declars it a decided antineuralgic, relieving sciatic, crural, and lumbar neuralgias. Prof. G. C. Gere (Cal. Med. Jour.) asserts that it is the most valuable of deobstruents to relieve renal congestion in the second stage of tubular nephritis (Dynam. Therap.). Too much, however, must not be expected of it where there are structural changes of the vital organs. Acute inflammation of the upper laryngeal and post-nasal region is specifically met by this drug, according to Prof. Webster being nearly as positive as phytolacca, and preferable when the irritation does not extend beyond those parts, and is readily brought on by slight exposure (Dynam. Therap.). Goss found it to remove ascarides from the rectum when given in cathartic doses. As an emetic, from 12 to 30 grains of the powdered root-bark may be given; as a hydragogue or diuretic, the decoction is the best form in which to employ it – 1 ounce of the root may be boiled in a pint of water, of which half a wineglassful, or even less, may be given 3 or 4 times a day. Smaller quantities of the decoction, given warm, will cause diaphoresis; as a purgative, the aqueous extract may be given in doses of from 3 to 6 grains. For its specific uses the decoction in small doses (a teaspoonful every 1 or 2 hours) or the specific medicine is preferred. R Specific apocynum, gtt. x to 3j; aqua, fl3iv. Mix. Sig. A teaspoonful every 1 to 3 hours. The decoction is most effectual.

Apocynin is reputed a powerful heart tonic, similar in action to strophanthus and digitalis.

Specific Indications and Uses -Water fullness of cellular tissues – oedema; puffiness of eyelids, and wrinkled lids as if the parts had recently been swollen; feet full and oedematous, pitting upon pressure; constipation, with oedema; scanty urine; skin glistening; circulation sluggish; passive hemorrhages, small in amount, with great depression, and oedema of the feet; hemoptysis; menorrhagia, profuse, too often and too long continued; full, relaxed uterus, with watery discharges.

1911: Fyfe
Edema of cellular tissue, swelling of the feet, fullness of eyelids and puffiness under the eyes. Apocynum is frequently indicated in rheumatism, rheumatic neuralgia, diseases of the joints and diseases of the mucous membrane, in sciatica it is also a remedy of curative power.

1911: LLOYD.
American “Indian Hemp”, Apocynum cannabinum, is the name given to various species and varieties of this plant, in contradistinction to the true Indian hemp of India , Cannabis indica. The root of apocynum has been used in decoction as an active hydragogue cathartic, and also as a diretic, in domestic medicine, since the days of the earliest settlers, who learned of its qualities from the Indians. Thus introduced into medication, it came to the attention of the profession.

As a remedy in “dropsy” apocynum has been extensively used in home medication, and thus became known to physicians of American education.

Finally it was introduced to the pages of the Pharmacopeia. The Eclectic literature of America for nearly a hundred years has been prolific in the praises of this remedy. (Drug Treatise by Lloyd Brothers, now in process.)

1928: H.Smith
Meskwaki tribe: The root medicine is a universal remedy for many things. It is especially used by the indians , in dropsy and ague.