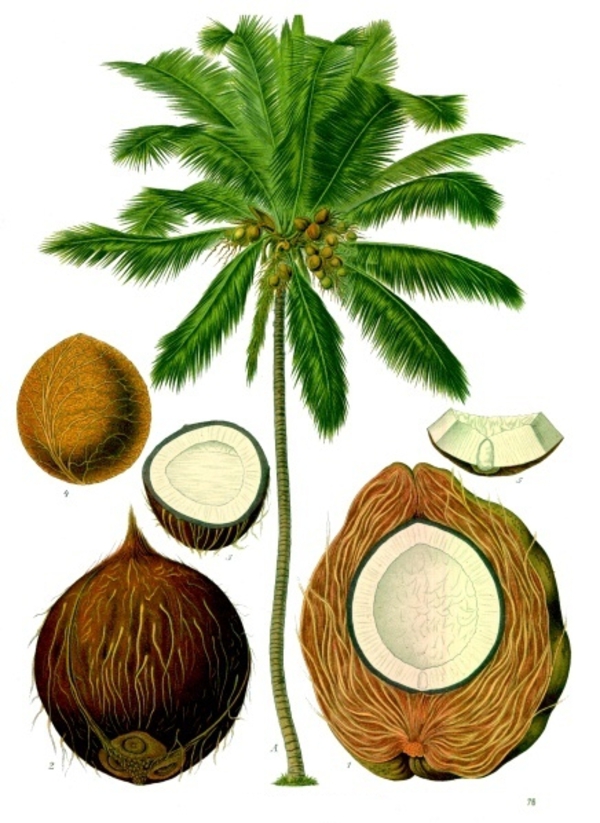 Part Used: Oil of the seed

In a Word: Skin healer

Uses: Anytime the skin is red, raw, sore or in need of general healing.

Palm trees are fascinating plants. They are some of the most ancient plants on the planet. They were around when the dinosaurs roamed the earth and unlike the dinosaurs, they are still around. Apart from being an ancient life form, they, as a group provide us with some very powerful medicine.

The coconut palm, date palm, saw palmetto, and the oil palm are just four examples of palms that produce substances used in healing. It is curious to note that around the world palm products are used as sources of healing power when a person needs some healing. The Arabians use the dates to boost a persons vitality when they are suffering from serious illnesses such as cancer and tuberculosis. Saw palmetto was used first by the Native Americans and then by the
colonials to treat wasting conditions. Conditions in which the body slowly disappears until death occurs. For centuries the oil produced from the oil palm has been used both in Latin America and in Africa to heal the body in general. It has also been used to heal any part of the body that is in need of healing. The same is true of the coconut palm and its many products. Palm trees produce fruits that contain something special, something healing. No one entirely understands how they do what they do, but, around the world local people call these fruits in when someone needs healing.

The coconut palm fruit is called a coconut. Within the hard outer wrapping is a nut-like fruit and within this hard nut is milk, meat, and oil. Tropical people have collected these fruits for a very long and used them in food and in medicine. All of the coconut parts are applied topically to speed wound healing and to improve the skin generally. They are taken internally to increase vitality and to speed convalescence. The substances within the coconut are a source of healing power and that is all there is to it.

The most powerful part of the nut is the oil it contains. It is a highly caloric, meaning that it contains great energy. It will burn and produce light! It is the most potent part of the coconut and a very interesting substance chemically speaking. Coconut oil is really a cocktail of different oils. Each of the oils has its own attributes but the composite of them is a healing ointment.

Tropical people have long used it to take the red out of a sunburn or to soothe the cracked red nipples of the nursing mother. Science has determined that coconut oil is rich in oils called phytosterols, plant steroids. Most people are familiar with the steroid cream the doctor prescribes to reduce inflammation in poison ivy rashes and eczema. What they do not know is that nature produces its own steroid cream and it is called coconut oil.

More than just taking the red out, which it will do, coconut oil provides the skin with many of the oils it needs for health. Sometimes the environment depletes the skin of its own oils. Fishermen and those that work on the roads all complain of weather dried skin. As we age, we produce less and less oil and our skin dries and loses lustre. In both instances, the application of coconut oil results in the return of skin health! It can be used by anyone to insure nice and healthy skin.

Practitioners’ Advice
Though expensive cosmetics and prescription skin care products are popular, there is a simple skin treatment which is far less expensive. Coconut oil, plain and simple, regularly applied will heal problem skin and keep normal, healthy. Simple coconut oil products are worth their weight in gold when it comes to skin, hair, and nail maintenance.