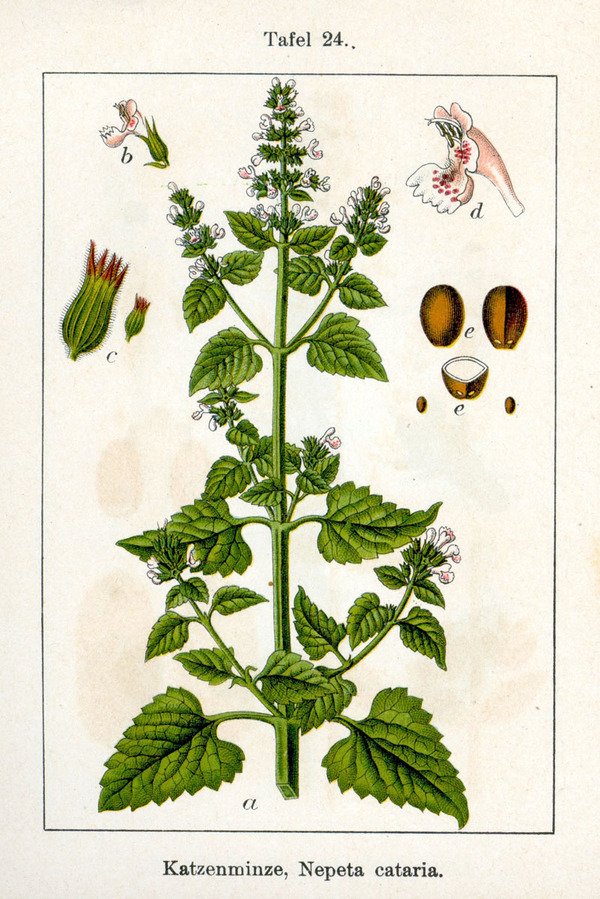 You have to love a plant that makes cats go coo-koo crazy for no apparent reason! Apart from torturing your pets, catnip is a long used and very mild tonic. Used to improve general health when used long term, catnip is a classic European tonic and one with a long history

1895: Watkins: NEPETA CATARIA:
Colic, flexing of thighs upon abdomen, persistent crying. One drachm of tincture to four ounces of water; teaspoonful every half hour.

1901 : Harvey W Felter (Appendix) – CATARIA – CATNIP
BOTANICAL ORIGIN – The leaves and flowering tops of Nepeta Cataria, Linne. Nat. Ord., Labiateae. Catnip is a common plant indigenous to Europe , but naturalised in this country and everywhere abundant around old buildings. fences and waste and cultivated lands. Its virtues depend chiefly upon a volatile oil and tannin.
This agent is so common in domestic practice that physicians too often overlook its value. In warm infusion it acts as a diaphoretic, and taken freely upon retiring will often break up a cold’. It has a quieting and soothing effect upon neurasthenic women, and for children if employed unsweetened, is often more effective than so-called soothing syrups. For irritability and flatulent colic in children, it is a positive remedy.

It relieves nervous headache, and is of value sometimes in amenorrhea, dysmenorrhea, and hysteria. The indications are irritability and debility; if in children’s abdominal disorders, there is constant crying, writhing, and flexing of the legs upon the body. The infusion may be freely employed; of specific nepeta cataria, the dose is from 2 to 60 drops in hot water.

1909: Felter and Lloyd: CATARIA – CATNIP
History – Catnip is a very common, naturalized plant, growing about old buildings and fences, and on waste and cultivated lands, flowering from June to September. It is a native of Europe . The tops and leaves are medicinal; they have a strong, characteristic odor, not very grateful to many persons, and a peculiar, bitterish taste. Their virtues are imparted to boiling water by infusion. It is very much liked by cats, preventing, it is said, attacks of fits.

Catnip should be collected each year in June and July, when flowering, and the coarset stems and branches rejected. It deteriorates in value, hence the necessity of gathering it annually. A variety, Nepeta Cataria, Linne, var. citriodora, Becker, has the odor of lemon or balm.

Action, Medical Uses, and Dosage – Catnip is diaphoretic and carminative in warm infusion; tonic when cold. It is also antispasmodic, emmenagogue, and diuretic. In warm infusion it is used in febrile diseases as a diaphoretic, and to promote the action of other diaphoretics, as well as to allay spasmodic action and produce sleep; it is also given as a carminative and antispasmodic in the flatulent colic of children; and as an emmenagogue or uterine tonic, it has proved decidedly beneficial in amenorrhoea and dysmenorrhoea, and has likewise been successfully employed in nervous headache, hysteria, and nervous irritability. The leaves are reputed beneficial in toothache, when masticated and applied to the decayed tooth. A warm infusion of saffron and catnip is a very popular and beneficial remedy in colds, febrile and exanthematous diseases to which infants and young children are subject. The infusion is very efficient in allaying the irritability and nervousness of dyspeptics. A fluid extract of catnip, valerian, and scullcap forms an excellent agent for the cure of nervous headache, restlessness, and many other nervous symptoms. The expressed juice of the herb, given in doses of a tablespoonful 2 or 3 times a day, is decidedly a superior remedy in amenorrhoea, often restoring the menstrual secretion after other means have failed. The leaves are frequently used in fomentation as a local application to painful and inflammatory affections. Of the dried leaves in powder, 2 drachms may be given for a dose in some liquid, as cold or warm water; the infusion (1 ounce of the recently dried herb to 1 pint of boiling water) may be drunk warm as freely as the stomach will permit. Specific nepeta cataria, 2 to 60 drops.

1911: Fyfe
Flatulent colic of children, nervous irritability, especially in children, flexing of the thighs upon the abdomen and persistant crying of children. In the treatment of children indications for this remedy are frequently seen. Ten to thirty drops added to five teaspoons of hot sweetened water, and given freely, constitutes a good treatment for colicky and fretful infants.