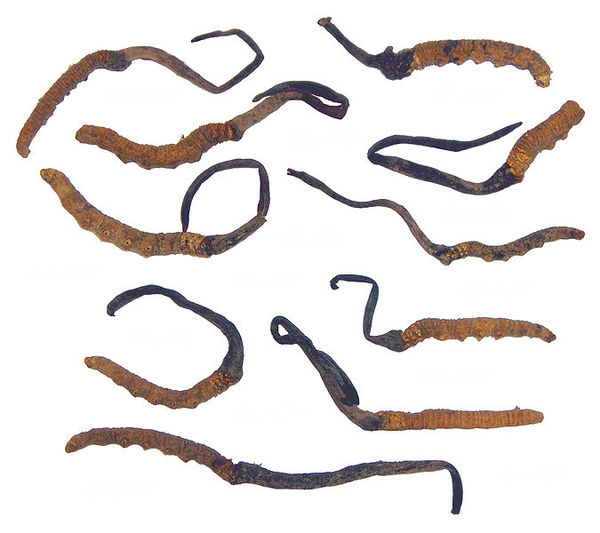 This is a very useful remedy. Firstly, if you are looking for a supplement that will make your mind function on all cylinders, you have found what you are looking for. I have used cordyceps to fire up my mind for years and years and its the best mind mint I can recommend.

Secondly, if you are an athlete and are looking to increase your performance, cordyceps is the remedy for you. It was used by olympic athletes in the communist world to take home more than their share of gold. If you want to power up a work out, get some cordyceps.

Thirdly, its great for mind workers and its really great for people that are getting older. In the case of the aging population, cordyceps freshens the body along with the mind.

Cordyceps is a parasitic fungus that attacks the silk worm. Once the insect has been fully attacked, a mushroom like structure erupts through its head. It is, how shall we say, a terminal complaint. The sci-fi structure that erupts from the critters head is the drug we call Cordyceps. Long known by the Chinese to powerfully stimulate endurance and stamina, it is used by the Chinese Olympic athletes to increase their performance. Indeed, some years ago I was called by the Olympic Commission to discuss whether or not Cordyceps could be classed as a performance drug. It is.

Long used Chinese to increase stamina and well being, it was once an extremely rare and costly herb. In the modern day contemporary production techniques have brought the price down to the affordable range. Modern day body builders use it to power up a heavy work out session and endurance athletes use it to keep themselves on the track longer. Watch out, with this herb you may have to remind yourself to get off the treadmill.

The drug was traditionally used as a fertility aid in older men. Contemporary research has shown that this was a right on use. It has been shown to increase performance and libido on a number of fronts. In the first instance, the number of erections achieved in a 24 hour period and staying power improve with its use. Beyond that, the quantity of ejaculate produced is increased with Cordyceps’ use. It can be used for a variety of workouts!

As the global population ages and the elderly demographic increases, there will be a need for drugs that increase stamina and vitality. Indeed, drugs that undermine the signs and symptoms of ageing are postured to become important drugs in the future.

Moreover, resistogens have been shown to improve many of the physical problems associated with ageing. A closer look at the research findings for one of these drugs, Cordyceps sinensis (CS), makes this clear.

Cancer
CS acts as a potent inhibitor of cancer growth through immune stimulation. The action is at least in part due to polysaccharides found in the fungal body. Hobbs reports 14 different animal studies describing this effect. (14) The drug was shown to have an anti-lung cancer effect both in mice and in humans. (15, 16)

Heart disease
In vitro, CS has shown positive inotropic and negative chronotropic effects. Extracts have been shown to relax the aorta. (17, 18) A 77.2% improvement was achieved in 87 cases of arrhythmia. (19)

In addition, a CS extract inhibited formation of thrombi and platelet aggregation. (20) A human study demonstrated CS reduced cholesterol levels. 273 patients with hyperlipidemia experienced a 17.5% reduction in cholesterol and a 9.9% reduction in triglycerides when treated with the drug. No side effects were reported. (9) Animal studies showed the CS lowered total cholesterol, plasma triglycerides, LDL, and VLDL levels. It also raised HDL levels in normal and hyperlipidemic rats. (22)

Blood deficits
In a mouse study, CS initiated a significant increase in erythroid progenitor cells and erythroid colony forming units in bone marrow. The animals were treated with a cancer drug that normally causes a dramatic depletion of red blood cells. However, when administered with CS, the expected depletion was prevented. (23) CS was shown to increased platelet formation. (26)

A number of studies have demonstrated that CS causes increases in immune activity. Polysaccharides contained within the drug increase phagocytic and macrophage activity. (24) Following treatment with CS, B lymphocytes were strongly stimulated, macrophage levels were restored, and IgM and IgG responses were restored in cyclophosphamide treated lymphoma bearing mice. (25)

Nervous Abnormalities
In 23 cases of tinnitus, over 60% of patients experience improvement when treated with CS. (29)

Urinary problems and sexual dysfunction
When CS was given to 155 patients experiencing sexual hypo function, 64% showed improvement. Increases in 17-hydroxycorticosteroid and 17-ketosteroid were noted. (30)

Conclusion
In all the above mentioned areas, ageing takes its toll. There is significant evidence to show that resistogens have a place in the treatment of geriatric physical senility. Cordyceps is one of the best herbal remedies for the aging population and one that aging people need to know about.