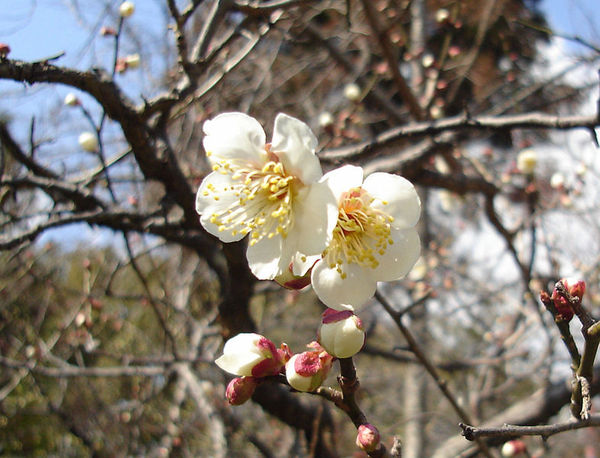 Ok, this is one weird looking herbal medicine. The raw plum is dehydrated in salt, dried in the sun, and ends up looking more like wild animal droppings than anything else. But, lurking in that unattractive shape, is a powerful medicine and one that the Japanese have sworn by for ages.

History and Traditional Uses of Ume
Ume is a deciduous tree native to China that was brought to Japan in eighth century AD. It is a member of Roseaceae family, a close relative of apricot and plum. The moment it landed on Japanese soil, a love affair between the Japanese people and this tree began. Japanese people love both its flowers and fruits. Numerous Japanese poets have prized its flowers and the fruits that follow. Over the centuries, noblemen and commoners alike have expressed adoration for the tree.

Due to its popularity, the tree has been subjected to intensive breeding. The tree now flowers in red, pink, and white. Ume is the first tree to bloom in Japan and is considered the herald of spring.

The interesting thing is this. Its fruits are poisonous when green on the tree, but, when processed, become safe for use as food and medicine. Unripe, they contain large amounts of cyanic acid. The ancient Japanese invented a method detoxifying the fruits and have been rendering them fit for consumption for hundreds of years. The process is time consuming but all that know the fruit feel it is well worth the work. The fruit is pickled with salt and afterward dried in the summer sun. They are then pickled a second time with Shiso leaves and finished off with one more session in the sun. The result is something called Umeboshi.

Though seen as being a booster of general well being, for the most part, ume fruits are used to improve the health of the digestive tract. It is used to normalize digestive function, from poor digestive juice secretion to excessive acid production. Not surprisingly, due to its intense popularity, it has been studied extensively in the lab.

The constituent principally responsible for the fruits sour flavor is citric acid. This acid is notoriously antibacterial and explains why it was used to prevent food poisoning.

Food Poisoning Prevention and Cure
The Japanese have developed a very refined way to take advantage of this plums medicinal properties-a special Extract of Ume is made. To make this extract, the unripe fruits are boiled to make a juice of Ume. This juice is cooked down from one kg juice to twenty g of solid extract. When the strain of E. coli O-157 broke out in Japan, people started using this extract to protect themselves. E.coli is relatively resistant to acid and stands up to a PH of 2.5. Ume fluid extract has a PH of 1.5. Moreover, research revealed the bacteria simply refused to grow when exposed to the extract. which made it an excellent tonic to be used during out breaks of E.coli infection. Experiments showed that the extract is antibacterial to twenty four kinds of bacteria including the typhoid bacillus, MRSA, and salmonella.

A water extract of ume fruit was used in 50 cases of bacillary dysentery, of which 48 were cured. Symptoms such as fever, nausea, vomiting, abdominal pain, and tenesmus were ususlly relieved within 3 days. No side effects were noted!

Parasite Treatment
Decoctions of Ume fruit were used in 20 cases of hookworm for periods of 5 to 23 days. On repeated stool examinations, 14 were negative for eggs. Ume was found to be more effective than the chemical medication for this infection.

Practitioner Recommended Uses of Ume
The most common use for this remedy is in indigestion and heartburn for which it is highly effective. Almost right away, acidity goes away and discomfort is relieved. However, unlike many of the over the counter remedies used to treat acid indigestion, Ume is actually good for the digestive tract! When digestive function is compromised, Ume can be used to remedy the situation.