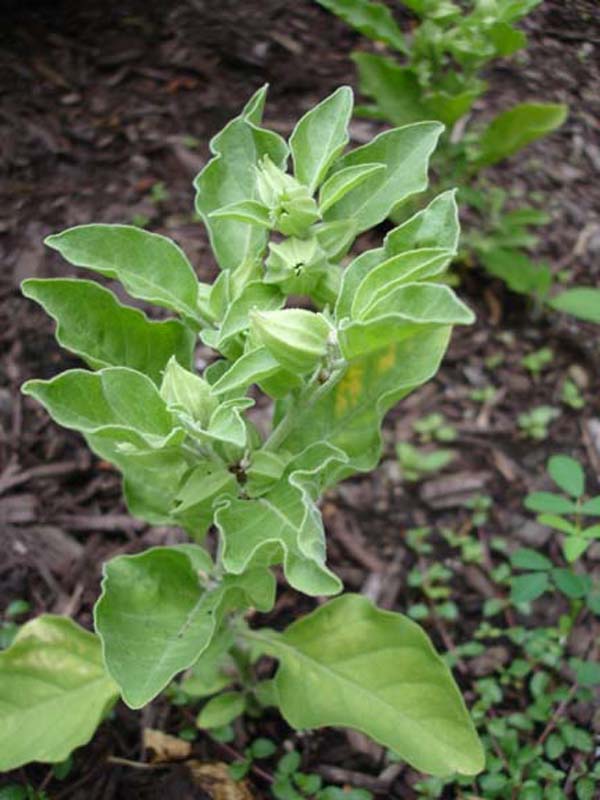 Once could say that Ashagwanda is one of India’s greatest contributions to the staying well arsenal. The plant has been used in children failing to thrive, in patients unable to mount a recovery, and in the elderly whose vitality is escaping them. A member of the night shade ashagwanda looks more like an eggplant than anything else, but, like the potato, the part used is the root. Because the plant is readily grown, it is one of the more affordable health stimulating tonics on the market and fairly easy to come by. For the student of staying well medicines, this plant is one that should be studied.

Withania is a vitality plant native to India. In its native lands it has been long used to speed convalescence, to bolster the health of weak children, and to pep up anyone else ailing or failing to thrive. The belief underlying its traditional use is that Withania anchors a person to life. It is said to insure a smile and bright eyes while a person walks the planet and to be ideal to the person on the other side of youth.

The Indian vitality plant has received substantial attention from the scientific community. Researchers have found it contains unique steroids, withanolides( withaferin A and sito-indosides) that are at least in part responsible for its fountain of youth effect. Sometimes called Indian Ginseng, Withania is no relation to ginseng but is similar in action.

Immune Stimulant
Aging can cause a reduction in resistance to infectious disease. Colds become hard to fight off and hard to kick. In animal experiments, Withania was found to stimulate the immune system. It increased bone marrow activity, white blood cell counts, and antigen production. (40, 45 )

Sex Hormone Stimulator
As we all know, hormone levels decrease as the years pass. An experiment with mice found that Withania increased the pituitary glands production of ovary and testicle stimulating hormones. (41)

Endurance Potentiator
One of the leading complaints amongst older people is reduced energy levels. This may be optional. In an animal study, researchers found that withania increased animals capacity to work. The animals were able to work harder and longer while taking it. (42)Adrenalin is one of the endurance hormones produced by the body. In another animal study, researchers found that withania increased the adrenal glands production of adrenalin.(43)

Stress Tonic
Older people sometimes complain about “feeling the cold” and generally have a harder time adapting to harsh environments. In a variety of animal studies, researchers found that animals were better able to withstand stressful situations when they were fed Withania. They were less effected by temperature, chemicals, and physical activity when given the herb. (46,47)

In a study of a group of training mountain rangers, working in high altitudes(5200 m) withania was found to increased vitality in the stressful environment. The rangers had better sleep patterns, were more responsive, alert, and had an increased work capacity. (49) Cancel that reservation at the condo in Florida!!

Thyroid Hormone Helper
Many people are being diagnosed with reduced thyroid activity. It would appear that long with all our other hormones, thyroid hormones production lessens as we age. Researchers found that animals feed Withania had an increased production of Thyroxine (T4), one of the two hormones the gland produces. (44)

History
Withania somnifera (WS) is native to the Indian subcontinent. In the Ayurvedic medical system, the drug is one of the most well recognised tonic drugs. In adults, it is described as a tonic, alterative, and aphrodisiac.

In children, it is seen as a promoter of nutrition and health in the weak. It is used to treat consumption, emaciation of children, debility of old age, and rheumatism. The drug is usually decocted with milk or macerated in clarified butter. In rheumatism, it is compounded with aromatics in clarified butter and applied externally. (29)

Adaptogen Criterion
Brekhman did not identify or research Withania somnifera as an adaptogen. However, his criterion can be applied to this tonic drug. A literature review reveals that WS matches Brekhman’s parameters of an adaptogen. Specifically, it is non-toxic, non-specific, and appears to normalise function. Examples that demonstrate this are as follows:

* WS has been determined to be safe and without noted toxicity. (17)

* The crude drug increased resistance to stress in a rat model. (23) WS also reduced stress-induced degeneration of nerve cells in the hippocampal sub regions of the brain in rats. It was determined to offer a neuroprotective action in stressed animals. (6)

* WS prevented a rise in lipid peroxidation in stressed rabbits and mice. (24) The drug has a potent anti-oxidant activity and was found to reduce DNA damage in human cells caused by free radicals. (11)

* WS protected against systemic Aspergillosis infection in mice. The effect was thought to be mediated through immune stimulation. (25)

* WS reduced chemically induced neutropenia and increased resistance to toxic chemicals in mice. The implication was that it could be used as an adjuvant in cancer therapy to counter bone marrow suppression (8)

* WS reduced liver and kidney destruction associated with the antifungal drug carbenazim. (13) The drug was found to reduce iron induced hepatotoxicity, which validated its usage in the reduction of heavy metal toxicity. The drug was also determined to decrease urotoxicity associated with cyclophosphamide exposure. (21)

* WS offered a chemoprotective effect in experimentally induced fibrosarcoma tumours in Swiss mice. The drug also reduced liver abnormalities associated with toxic compound exposure suggesting the anti-tumour effect might be due to detoxifying and anti-oxidant activity. (10)

* WS was determined to increase radiosensitivity of tumour cells. This effect was not tumour specific. (27)

* WS stimulated thyroid function in female mice. (22) It was also determined to increase spermatogenesis in immature rat testicles. The effect was thought to be due to a testosterone like effect. (12)

* WS was found to have a noortropic effect in naïve and amnesiac mice. It increased their ability to learn. (7) The drug was determined to act both as an anxiolytic and antidepressant in a rat study. It improved swim induced behavioural despair and learned helplessness tests. (14) It stimulated neurite outgrowth in a human neuroblastoma cell line. (4) WS was also determined to promote formation of dendrites in a study looking at neurite outgrowth and regeneration of neuronal networks. (19)

* WS was found to be hypoglycaemic, hypocholesterolemic, and diuretic. (15)

* WS was determined to stimulate generation of cytotoxic T lymphocytes. (3) The drug was found to inhibit granuloma formation in animal studies. The anti-inflammatory effect was found to be comparable with that of cortisone. (28) This effect was found both on the skin and in digestive tissues. (29) The drug was determined to act as an immunomodulator, increasing white blood cell counts and reducing hypersensitivity reactions in animal tests. (18)

* In a frog study, WS was determined to be cardiotropic, cardioprotective, and anticoagulant. (20)

Conclusion
In its traditional application, WS was used to bolster the young, the old, and the ill – groups that experience a lack of adaptability to new stressors. In addition, the catabolism, or tissue break down and subsequent wasting associated with severely stressed individuals, was said to be effectively remedied with this drug.
From a research perspective, WS clearly complies with the adaptogen criterion set down by Brekhman. There is evidence to support its use in raising general resistance to stressors and, specifically, to support its use in raising resistance in the elderly.

WS and Aging
Contemporary research confirms the appropriateness of traditional applications in support of the processes and by-products of ageing. (1–30) Studies have shown that the drug supports the immune system (8), the nervous system (4–6), the endocrine system (22, 12), and the cardiovascular system (20). In addition, it has been shown to act as an anti-toxic (21) and anticancer (10) agent. Indeed, many of the health challenges faced by the elderly seem to be countered with this drug.