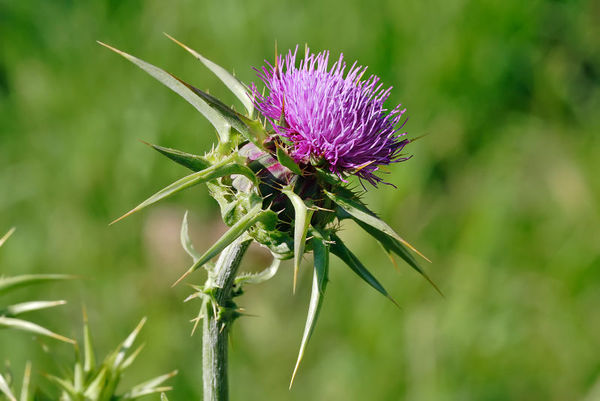 Milk thistle was a traditional treatment for mushroom poisoning. Mushrooms often kill by killing your liver. Thats a bit hint as to what this plant does…..it protects the liver from damage. Contemporary research confirms this use!

History and Traditional Uses
Milk thistle is a centuries-old remedy for liver problems. The famous English herbalist Gerard wrote that it is “the best remedy that grows, against all melancholy diseases.” (The word melancholy, derived from the Greek words melan, meaning “black,” and chole, meaning “bile,” was used in the Middle Ages to describe any liver or bile-related disease.)

Scientific Back Up
Milk thistle’s active ingredient, silymarin, is one of the strongest liver protectors known. Studies in people have shown that it improves cirrhosis, hepatitis, and liver damage caused by toxic chemicals. Silymarin binds to the membranes of liver cells, preventing toxins from doing damage. If the damage is already done, silymarin spurs the liver to speed production of proteins that help heal it.Herbalists use it to……Limit liver damageThe liver is responsible for removing toxins from our blood. It removes toxins before they have a chance to damage our tissues. As an example, if you are painting a room you absorb the toxic fumes coming off the paint. The liver has to get these compounds out of your body before they can do damage. The weak link in this plan is that the liver can become damaged in the process of getting toxins out of the body. Herbalists recommend that people who work with toxic chemicals(farmers, lawn care company workers, painters, and mechanics, etc.) use milk thistle to prevent damage to their livers.

Harness hepatitis
Viruses infecting the liver are hard to control and cause inflammation. They wound the liver. Just like a scratch leads to a scar, chronic hepatitis leads to scaring of the liver. When the liver becomes seriously scarred, it can no longer perform its critical work. They have cirrhosis of the liver. Herbalists find that patients with chronic hepatitis suffer less from their disease when they use milk thistle. The viruses seem controlled and the damage inflicted reduced.

Shopping Tips
Only buy products made out of milk thistle seed. The other parts of the plant are useless for liver protection. Milk thistle seed is taken in tea, capsules, tablets, tinctures and standardised extracts to good effect. The seed has been used for centuries and still works today! Avoid products that contain other herbal remedies besides milk thistle.

1898: Webster (digestive)
I have referred, under Remedies Which Influence the Circulatory System, to the influence of this remedy upon the circulation described by the distribution of the coeliac axis. In addition to this it seems to exert some influence over the functions of the stomach and liver, though whether it reaches further than the circulation may be some question.It has been recommended in the vomiting of pregnancy, swelling and painfulness of the liver, jaundice, tenderness and hardness of the right hypochondrium, gall-stones, abdominal pain and stitches in the side attending bilious conditions.It is a powerful and valuable remedy, and one which will replay any one for a careful clinical study. Its virtues have not been half determined.

Form for Administration- The tincture from a homeopathic pharmacy.

Dose- Add ten or twenty drops to half a glass (four ounces) of water and give teaspoonful every three or four hours.

1898: Webster: (ductless glands)
Carduus marianus influences the spleen, being especially valuable in nonmalarial hypertrophies, where polymnia and other remedies of this class fail. The indication for it is dull, aching pains in the region of the spleen, extending under the left shoulder blade, and attended by despondency and physical debility of marked character. It relieves the pain when there is no enlargement appreciable. It has been recomended for leucocythemia, but I have no knowledge of its virture in this direction. Mary thistle is indigenous to southern Europe . The part used in medicine is the fruit known as Fructussilybi, or Semen cardui mariae. The achenia are from 1/6 to 1/5 of an inch long, obovate, smooth, shining, and pale-brown in color, with striae of a black, or blackish hue. At the apex they are oblique and have a marginal crown of a yellowish color, from the center of which the style-base projects. They have no odor, but a mucilaginous and oleaginous, as well as bitterish, taste. They yield their virtues to diluted alcohol. The Homoeopathic mother tincture is prepared by covering the whole ripe seeds (1 part by weight) with diluted alcohol (2 parts), and letting stand in a dark, cool place in a well-stoppered bottle for 8 days, shaking twice a day. It is then decanted, strained, and filtered. The introduction of this medicine into Eclectic therapeutics is due chiefly to Prof. H. T. Webster, M. D. (Dynam. Therap.), and to Prof. Finley Ellingwood, M. D. (Ecl. Annual, Vol.I).

Action, Medical Uses, and Dosage – Carduus marianus is an old remedy, which had nearly passed out of use and has more recently been revived. Rademacher valued the seeds in hemorrhages associated with splenic or hepatic disorders. That it influences the parts supplied by the coeliac axis, particularly the distribution of the hepatic an dsplenic arteries, especially the latter, seems well established. Congestice conditions of the splenic circulation are those most benefited by it. To a lesser extent, the whole venous apparatus is influenced by this drug, giving power to the veins, and preventing varicoses and other dilatations. But little effect, however, is observed upon the hemorrhoidal circulation, as piles do not seem to be directly benefited by it. Dull, aching, splenic pain pasing up under the left scapula, and associated with pronounced general debility and despondency is the indication for its use. It controls splenic pain even where no enlargement can be detected, and it is the remedy for hypertrophy of the spleen when non-malarial in character. Congestion of the liver, spleen and kidneys is relieved by its use. Bilious states, with stitches in the side and pain in the abdomen, hard and tender right hypochondrium, gall stones, jaundice, hepatic pain and swelling, vomiting of pregnancy, an dleucocythemia, are conditions in which it is reported useful. Amenorrhoea, with wrong of the portal circulation, melaena, hemoptysis, and uterine hemorrhage, have all been successfully treated with it. Hematuria, with weight and pain in the pelvis, has been promptly met by 25-drop doses in water, twice a day. Painful dysuria, from urethral caruncle, and pelvic congestion have also been quickly relieved by it. A strong tincture (seed, 3viii to alcohol Oj), or the homoeopathic mother tincture, in doses of from 1 to 20 drops.

1919: EllingwoodSynonyms - St. Mary’s Thistle, Mary Thistle, Milk Thistle.
Preparations – A strong tincture; dose, from two tw twenty drops. The Homeopathic mother tincture, dose from one to twenty drops.This remedy was spoken highly of by Rademacher, in hemorrhages, where there was congestion of the liver or spleen. Where there was periodical biliary lithiasis. He employed the tincture of the seeds, in dysuria, where there were caruncular growths, in the female urethra.He claimed it to be of value in hemorrhoids, and in venis stasis. Carduus has been frequently advised in the treatment of varicosed veins. Its influence in this line must be studied. This condition has been neglected by internists, they having been taught that it was a surgical condition only.Tripier used in it pelvic congestions, with quick and permanent results. Its action has seemed to be similar to that of hamamelis an dcollissonia. A case of chronic hematuria, with sensation of weight and tension in the pelvis depending upon varicose conditions of the rectal veins, was quickly relieved by it.

Specific Symptomatology – Felter and Lloyd say that its indications are found in dull aching pain over the spleen, which passes up to the left scapula, associated with pronounced debility and despondency, splenic pain, with no enlargement or with enlargement, when there are no evidences of malaria. Congestion of the liver, spleen and kidneys. General bilious conditions accompanied with stitches in the right side, with hard and tender spots, in this locality, gall stone, jaundice, hepatic pain and swelling. Also in the vomiting of pregnancy when these organs are complicated.As it overcomes congestion with the pelvis, it is useful in certain forms of dysmenorrhoea, amenorrhoea, or irregular passive uterine hemorrhages.

Therapy – Harvey , in the California Medical Journal, says the indications are so plain that a tyro can prescribe it with certainty. It is indicated where there is venous stasis, the true veins enlarged and clogged with blood. This is true of either the large or small veins. He says he cured one case, where the veins from the hips to the toes were as largea nd as hard and twisted as Manila rope. They could be felt through the clothing. He cured completely a viricose tumor in the popliteal space. It was about four inches long, and three inches wide. The skin of the neck and hands was discolored. There was a troublesome chronic cough with the expectoration of large quantities of offensive matter. He believed these symptoms to be associated with disease of the spleen. He had observed these colored spots in other cases, and sometimes found long continued soreness and tenderness of the joints of the feet. Carduus, in five-drop doses three or four times a day, cured all the symptoms in this case, restoring the patient to perfect health. The remedy acts slowly and must be persisted in.