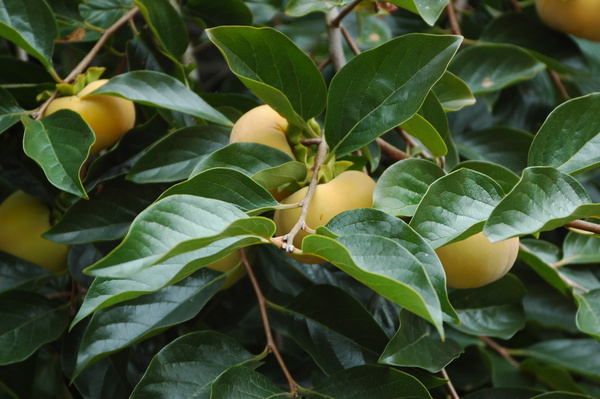 1854: JOHN KING – DIOSPYROS VIRGINIANA – PERSIMMON
Properties and Uses – Tonic and astringent. The barks has been used in intermittents, and both it and the unripe fruit have been beneficial in various forms of disease of the bowels, chronic dysentery, and uterine hemorrhage; used in infusion, syrup, or vinous tincture, in the proportion of one ounce of the bruised fruit to two fluidounces of the vehicle, and half a fluidounce or more given to adults, and a fluidrachm or more to infants. The infusion may be used as a gargle in ulcerated sore throat. The ripe fruits are very grateful and healthy, and as they ripen at a time when most other autumnal fruits have disappeared, the three should be cultivated; for if it should improve in the same ratio as the peach, plum, etc. it would form a very valuable addition to our fall fruits. A pleasant beer is made with the ripe fruit, hops, water and yeast; and a species of brandy is obtained by distillation of the fermented infusion.

1883: Scudder
The bark of the persimmon is astringent, tonic, and antiseptic. Dr.Barton considered it one of the most powerful of our native astringents. It is employed with advantage in diarrhea and dysentery, especially where there is much prostration, and a relaxed and atonic condition of the bowels. It has been used in cholera infantum or the summer complaint of children. In these cases it may be given in the form of syrup, tincture, or infusion. In dysentery it may be advantageously combined with leptandra and rhubarb. It has also been employed in passive hemorrhages, it is said, with good results.

As a local application, a strong infusion has been advantageously employed as a gargle in ulcerated sore throat, and as wash in sore mouth. The bark is antiseptic, and may be employed in the form of a poultice to gangrenous parts. the infusion is also employed to cleanse and stimulant foul and indolent ulcers.

1909: Felter and Lloyd: DIOSPYROS – PERSIMMON
History – This is a well known indigenous tree, growing in woods and fields from Rhoe Island to the western states and southward, flowering from April to July, ripening its fruit in September and October. The fruit is edible after exposure to frost. The unripe fruit and the bark are very astringent, and are the medicinal portions of the tree. (For description of fruit see Botanical Source). A beer is sometimes made from the fruit, and the fruit is made into a bread with wheat bran, known as persimmon bread, and then kept for the purpose of making beer by means of fermentation with hops. The roasted seeds have been used in some portions of the South as a substitute for coffee.

Action, Medical Uses, and Dosage – Tonic and astringent. The bark has been used in intermittents, and both it and the unripe fruit have been beneficial in various forms of disease of the bowels, chronic dysentery, and uterine hemorrhage; used in infusion, syrup, or vinous tincture, in the proportion of 1 ounce of the bruised fruit to 2 fluid ounces of the vehicle, and 1/2 fluid ounce or more given to adults, and a fluid drachm or more to infants. The infusion may be used as a gargle in ulcerated sore throat. When ripe the fruit is very palatable, and as it matures at a time when fruits are generally departing for the season, the cultivation of the tree would undoubredly be a valuable accession to our autumnal fruits. A kind of brandy is obtained by distillation of the fermented infusion.