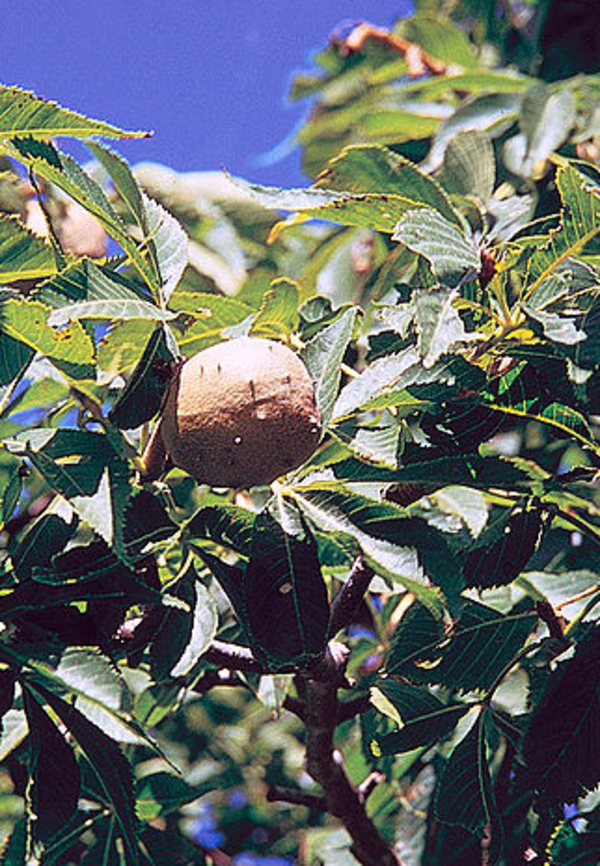 Use: Exerts a direct influence on the portal circulaiton and uterine cervix. Overcomes cappillary stasis. Disorders of a congestive nature, especially of the viscera and venous structures of the rectum. IN hemorrhoids from portal congesion or reflexes from this condition such as headhache, spasmodic asthma, dyspepsia, lumbar and sacral pain, spasmodic stricture, rectal neuralgia and fissures it is indicated. In hemorrhoids with fullness and dryness of rectum, purplish color of hemorrhoids, a constricted feeling without constipation, painful and difficult stool, throbbing of the abdominal and pelvic vessels it is indicated. In neurlagia of malarial origin it is of some value.

1909: King’s Dispensatory
This agent influences the nervous and circulatory systems, having a selective affinity for the portal circulation. In over-doses it affects the cerebro-spinal system somewhat after the manner of nux vomica. Dizziness, fixation of the eyes, impairment of vision, vomiting, wryneck, opisthotonis, stupor, and tympanites are among its effects. In lethal doses these symptoms are increases, coma supervenes, and death finally takes place. Intestinal uneasines and irritatin, with a sense of contraction and colic like pains in the region of the umbelicius, are indications for its use. It is asserted valuable in intestial dyspepisia with these ssymptoms, and in hepatic congestion and chronic constipation. Its control over the portal circulation and its attendant disorders is pronounced, and as a remedy for hemorrhoids depending upon portal derangement, it has attained a reputation. A sense of constriction in the rectum is the guide to its use.

1909: Felter and Lloyd: AESCULUS – OHIO BUCKEYE
History – The Ohio buckeye is found growing along streams an driver banks in Ohio, Pennsylvania, Virginia, Kentucky, Indiana, north to Michigan and south to Mississippi. It flowers in May and June, and on account of the unpleasant odor given off the treei s often called fetid buckeye. The fruit contains an abundance of very fine starch, which it is surprising has not yet been introduced into commerce.

Action, Medical Uses, and Dosage – This agent influences the nervous and circulatory sytems, having a selective affinity for the portal circulation. In over-doses it affects the cerebro spinal system somewhat after the manner of nux vomica. Dizziness, fixation of the eyes, impairment of vision, vomitting, wryneck, opisthotonos, stupor and tympanites are among its effects. In lethal doses these symptoms are increased, coma supervenes, and death finally takes place. The dried powder of the nut inhaled causes violent sneezing. The action of buckeye is similar to, but more powerful than that of the horse-chestnut (A. Hippocastanum), though some think it less powerful than the latter in its effects upon the portal circulation. It probably acts more powerfully on the spinal than upon the sympathetic nerves. When an excited circulation, with frequent pulse, depends upon disorders of the respiratory and sympathetic nerves, it acts as a decided sedative. The difficult breathing of non-paroxysmal asthma, where the dyspnoea is persistent, but does not amount to a paroxysm, is markedly benefited by aesculus glabra, while on coughs, associated with post-manubrial constriction – a sensation of grasping and tightening – its action is positive. The latter sensation without the cough quickly yields to it. Phthisis, bronchitis, etc. with dyspnoea and oppression, are palliated by it. Intestinal uneasiness and irritation, with a sense of contraction and colic-like pains in the region of the umbilicus, are indications for its use. It is asserted valuable in intestinal dyspepsia with these symptoms, and in hepatic congestion and chronic constipation. Its control over the portal circulation and its attendant disorders is pronounced, and as a remedy for hemorrhoids depending upon portal derangements, it has attained a reputation. A sense of constriction in the rectum is the guide to its use. In female disorders, with tumid and enlarged cervix uteri, with too frequent and profuse menstruation, it may be employed with advantage. Owing to its powerful action upon the nervous system the drug will repay study. It has been employed with asserted success in rheumatism, and as a stimulant in paralysis. The dose of specific aesculus glabra is from 1 to 5 drops.

1911: Fyfe
Sensations of constriction in the chest, sensation of tightness in the region of the heart;difficult breathing of asthma, feeling of constriction about the rectum.
In that form of asthma which is not markededly paroxysmal aesculus is pompt in exerting a controlling influence over the difficult breathing. It is also beneficial in the difficult breathing of consumptives. As a stimulant to the nervous system in paralysis, and as a remedy in mental depression, aesculus is used with success. In hemorrhoids it is also a medicine of curative power.

AG is tonic, stimulant, astringent, febrifuge, and antiseptic. In very large doses it is a narcotic.

Preparations – Specific Aesculus. Dose, from one-tenth of a minim to five minims.

Therapy – Aesculus Glabra is a narcotic, but actively stimulates the nervous system somewhat like nux vomica. It has a special influence on the capillary circulation of the rectum, and on the pelvic and portal circulations and overcomes constipation and congestion associated with hemorrhoids, and aids in the absorption of the coagulated blood in hemorrhoidal tumors where a surgical operation is not deemed advisable. It lessens the caliber of the capillary vessels, and removes obstructions to the pelvic circulation, and is applicable whenever congestion results in hemorrhoids, or in enlargement of the uterus.

Concerning the application of this remedy for piles, Dr. Bloyer in The Gleaner said the piles are usually large and purple. They rarely bleed. There may be a sense of fullness in the rectum or there may be dryness with stricture of the rectum, causing a proctitis, all of which is relieved by this remedy as well also as the headache, backache and digestive of asthmatic disturbances, which are reflexly induced.

In paralysis it is a stimulant similar to strychnine. As a narcotic it acts similarly to opium but has much less narcotic power.