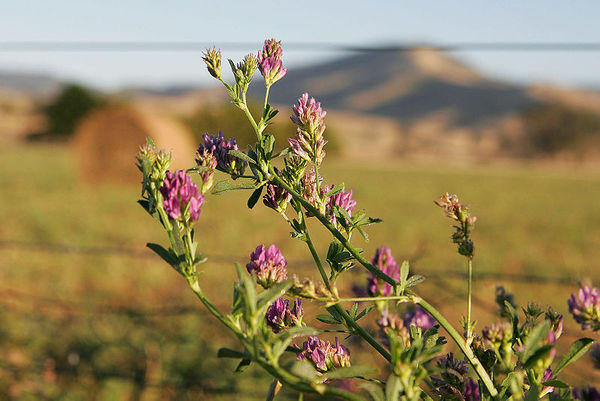 Alfalfa is mostly seen as a food for grazing animals, but, it does have a history of use as a people medicine. Its related to clover and fenugreek, and likes these two relatives,it has been used to put perk up people whose vitality is slipping away from them.

Physiological Action – On taking large doses of an infusion of the leaves of alfalfa as one would drink tea or coffee, there is a sensation of warmth in the stomach with fullness of the blood vessels of the head. (A sensation which gelsemium removes.) The stool early in the morning is mushy, and dark green, much like after taking bismuth, but without pain or tenesmus. A large dose at night, other symptoms calling for it, produces a good night’s rest and decreases any burning sensation on micturating as seen in cases of early gonorrhoea. The above are observations that were made on tenmen and five women who took this drug, alfalfa. They were in usual good health and free from any organic trouble. Some took it for two months, and some only for ten days to two weeks.

There is an increased secretion of the kidneys from this agent and in the female, of the milk glands; increased peristaltic action of the bowels; increased appetite; increased assimilation of food, and increased weight. In one case there was a disappearance of swelling of the milk glands. There is a sensation of weight in the female genitalia with bearing down sensations. (In the males, the scrotum feels heavy and there is distress in the spermatic cord as if strained. Neutralization of acid urine occurs with itching of the corona glandis, found in some cases of enlarged prostate.)

These observations were made by Dr. Ben A. Bradley of Hamlet, Ohio .

From the fact that alfalfa increases the flow of milk in cows while they are yet gaining in flesh, Dr. Bradley gave the remedy freely to mothers who were insufficiently nourished, and secreted but little milk, or milk devoid of its nutritious properties, for the child.

He believes that a tea made of alfalfa will readily take the place of ordinary tea and coffee, and as a beverage for certain periods, he has found it to take away the taste for these commoner beverages and preserve an excellent condition of the stomach.

With one woman who in three previous births had had kidney complications with uremia, he preserved with this agent a normal condition of all the functions through the pregnancy and labor.

He finds in Alfalfa a superlative restorative tonic, but it does not act as a stimulant, after the manner of alcohol, cocaine or other habit-forming drugs. It rejuvenates the whole system by increasing the strength, vim, vigor, and vitality of the patient. In al cases, the ever-marked condition calling for the remedy is despondency, along with loss of flesh, whether the case is one of stomach trouble, such as indigestion, dyspepsia, general and nervous debility, anaemia, marasmus, loss of appetite and poor assimilation, as shown by loss of flesh and constipation, with the always accompanying condition, depression. Alfalfa, administered in the dose one or two drops in a bottle of milk three times daily, is especially useful with bottle-fed babies. One physician prescribed it where there was dropsical effusion, where the kidneys were inactive, and the skin dry, and in every case so administered, it gave satisfactory results.

In old men, it relieves prostatic irritation. It relieves irritable conditions of the urinary apparatus.

Dr. Houts cured backaches where the patient was passing a small quantity of urine with high specific gravity, especially where there were rheumatic indications, with much muscular aching with excessive quantity of urats and uric acid.

Dr. Bradley reports one family where seven children had died at the age of eighteen from some undefined disorder with great emaciation. The eighth child, a daughter, exhibiting the same symptoms was kept on a tincture of alfalfa seed fully saturated, ten drops four or five times a day. The condition disappeared, the patient increased in weight from 99 to 133 pounds, and recovered her health.

In a concentrated form, this will be probably found nutritional, occupying in some particulars a position like that of avena, improving the functional action of the brain and spinal cord. We have introduced this remedy here because it promises well for the future, and must not be overlooked.